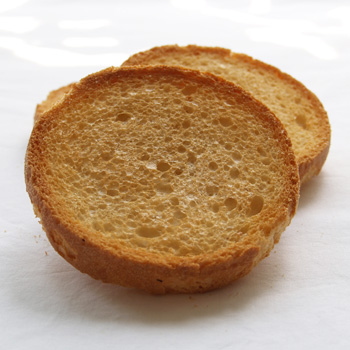 Rusks are small flat, circles of dry, toasted bread made in the Netherlands. They are more like a biscuit than a bread, as they are twice-baked.

They are very crispy and fragile, with a texture like extra-dry toast.

Rusks are made from flour, baking powder, butter, egg, salt and either milk or water. The ingredients are mixed to make a smooth dough, which is then rolled out about 1 inch (2 ½ cm) thick, and cut out into rounds anywhere from 2 ½ to 4 inches (4 inch (6 to 10 cm) wide. The rounds are baked for a few minutes, then removed from the oven, cut in half, and returned to oven cut side up at a lower temperature. They are then baked further until crisp and golden-brown.

They are sold in paper cylinders. They are easily crushed — so when your groceries are being packed, make sure they end up on top.

The Netherlands have been large exporters of Rusks. One of the main Dutch producers is Royal Haust Factories, established 1905, Dutch Royal Warrant received in 1924.

This web site generates income from affiliated links and ads at no cost to you to fund continued research · Information on this site is Copyright © 2022· Feel free to cite correctly, but copying whole pages for your website is content theft and will be DCMA'd.
Tagged With: Dried Breads, Dutch, Dutch Food