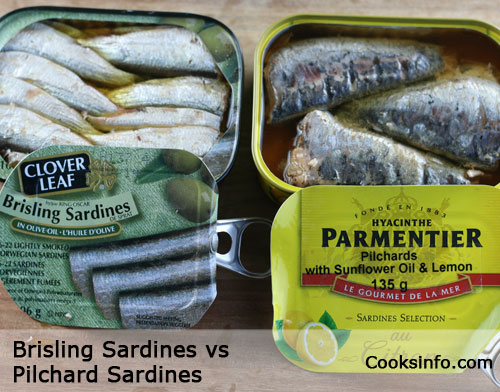 It’s best to think of sardine as a “category” word, rather than one actual fish, as there are several different kinds of fish that are sold as sardines.

In Europe, the word “sardine” is used frequently, but not always, to mean a young pilchard; in North America, what is labelled as a sardine is frequently a sprat or a herring. In general, they are small “versions” of blue fish.

There are at least six different kinds of fish that will be sold as sardines:

For the most part, though, any of the fish called a “sardine” will be a small fish, averaging 12 to 20 cm (4 ½ to 7 ½ inches), and can be used interchangeably (pace pilchard fans.) They will all be small, silvery fish that live in schools, and all have oily flesh.

To process sardines for canning, the heads and tails are cut off, and the insides cleaned out. Then they are steamed for around 12 minutes, then sealed into cans which are cooked for about another 30 minutes.

Tinned sardines are sold packed in either olive oil, vegetable oil, or a mustard sauce or a ketchup sauce.

Fresh sardines are very popular in Spanish cooking and taste very different to the canned ones.

Many people can’t stand the smell of sardines, but those who don’t like the tinned are often surprised to find themselves liking the fresh, barbequed ones.

When buying fresh sardines, look for shiny, bright skin and clear eyes. Ones that are seven inches (18 cm) in length or less are good for frying; larger ones are good for grilling. To scale them, just rub them between your fingers in a pail of water and the scales should just fall away.

Fresh sardines can be dredged in flour and fried, or grilled/barbequed.

To barbeque/grill fresh sardines, allow 3 ½ pounds (1.5 kg) for 4 people. Wash, and if not cleaned, clean and wash. Dry with paper towel, sprinkle with salt, cover with plastic wrap and set in fridge for an hour. Then rinse, pat dry again, coat with olive oil. At this point, you can refrigerate again until needed, but bring to room temperature half an hour before needed. To cook, simply cook on hot barbeque for about 3 minutes each side.

Sardines do not freeze well.

There is a possibility that plans for tinning sardines were being formed as early as 1809 by the Millet company in Port-Louis, Morbihan, France, but it does not appear that these early plans came to fruition. [1]

It was Pierre-Joseph Colin (14 September 1784 – 18 July 1848) who seems to have first tinned them around 1820 at his vegetable canning factory in Nantes, France. [3] In the 8 June 1822 edition of “Le Journal de Nantes et de la Loire Inférieure”, a writer called the new product an “invention précieuse.” In 1824, Colin opened a new factory at 9 rue des Salorges to handle the demand for the sardines. By 1835, his factory was producing about 36,000 tins of pilchards a year. He continued to also produce other canned food products such as vegetables.

At the turn of the 1900s, sardines were still considered a luxury. They reached their peak of popularity in America in the 1950s.

American fishing of Pacific sardines didn’t begin until the start of the 20th century.

“A modest milestone toward grocery reconversion is marked by the arrival of the first postwar shipment of the Norwegian Bristling sardines here out of Stavanger. Bristlings are sprats, the smallest of the herrings, five inches being the maximum length. A delicate fish it is, abundant in many parts of Europe and used there both fresh and smoked. The Bristlings are so tiny, so tender, the skin is left on, the bones are left in. The fish are split, cleaned, beheaded, and packed in oil with the flavor of Norwegian Sild sardines, the three and three-fourths-ounce tins selling for 22 cents at Charles and Company, 340 Madison Avenue.” — Paddleford, Clementine (1898 – 1967). Food Flashes Column. Gourmet Magazine. April 1946.

“The cooking, then the preservation in olive oil, confers on these fish such a definitive improvement in their gustatory value that the sardine in oil becomes better than a fresh sardine.” [2]

In Madrid, there’s been a spring festival since the 1800s called the “Entierro de la Sardina (Burial of the Sardine.) Men and women dressed in mourning black carry a small coffin with a sardine in it. Some speculate it started during the time of Carlos III when a shipment of sardines that had arrived in Madrid was all bad, and had to be buried. The next year, people decided to repeat the burial for fun, and it became a tradition. The ceremony takes place on Ash Wednesday, and so also has come to signify the end of Carnival. It was the subject of the 1814 painting El Entierro de la Sardina by Goya.

The name sardine probably originated from the catches of young pilchards caught off Sardinia, Italy.

Bailey, Johanna. The Burial of the Sardine: why are are the Spanish people holding funerals for sardines? Jerusalem Post. 22 February 2011