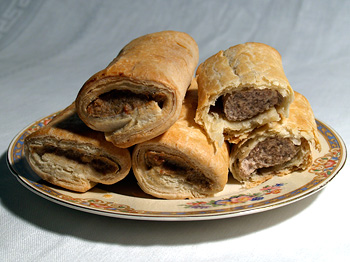 Contents hide
A Sausage Roll is a savoury pastry.

It is made from skinless sausage meat, rolled in a cylinder, covered with puff pastry and then baked. A Sausage Roll is similar to a Pig-in-a-Blanket, but a Pig-in-a-Blanket is a sausage with the casing on it rolled up in a shortcrust dough (usually.)

You can get (or make) large Sausage Rolls for lunches, snacks and picnics, and small, bite-sized ones for finger food at parties.

The quality of commercial Sausage Rolls varies widely. Some cheaper ones may put a lot of bread crumbs into the meat filling.

Sausage Rolls can be served hot or room temperature; they can even be eaten cold out of the refrigerator.

The sausage meat mixture is often beef and pork. You can make your own mixture, or purchase sausages and peel the skins off. The sausage meat is formed into a cylinder. The puff-pastry dough is usually just wrapped around this cylinder as a flat sheet, but it can be spiralled around in strips for a greater amount of crispy surface area after baking.

Sausage Rolls are popular in countries such as Australia, Canada, the Netherlands, New Zealand, Northern Ireland, and the United Kingdom. They are routinely sold at many bakeries in Australia and New Zealand.

Sausage Rolls are particularly popular at Christmas parties as finger food. For many people, the Christmas season hasn’t begun until the first plate of warm sausage rolls has been spotted.

A basic recipe for Sausage Rolls from ready-made ingredients. Multiply quantities as desired.

Beat the egg, set aside.

If using purchased sausages, remove the meat from the uncooked sausages and discard the skins.

Form the sausage meat into 4 tube shapes of equal length, set aside.

Spiral strips of the dough around each tube of sausage meat, so that the sausage is covered. Overlap ends of strips a bit.

If freezing, freeze at this point.

Put on a baking sheet, and brush with the beaten egg.

If serving as fingerfood, slice into bite-sized pieces at this point.

Bake for about 20 to 25 minutes until puffy and golden brown and the sausage meat is cooked.

Sausage Rolls can be prepared and frozen uncooked, then baked as needed. The pastry of frozen cooked ones will lose its crunch.