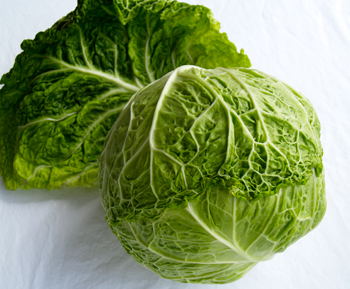 Savoy Cabbage has a milder, mellower flavour than regular cabbage, and a great look and texture, with its dark green wrinkled leaves and large, tight heads.

Widely available for quite some time in the UK, Savoy Cabbage is now starting to be produced and sold in the North America.

If you hate even the thought of cooked cabbage, then chances are you’ve only had White Cabbage and never tried the Savoy.

Savoy Cabbage is one of the best choices of cabbage for cooking with.

Store Savoy Cabbage in a plastic bag in the refrigerator for up to 1 week.

The first records of Savoy Cabbage come from Savoy, France in the mid 1500’s. Savoy was not French at the time, though: it was ruled by the Italian House of Savoy.

Savoy is the English spelling of “Savoia”; in French it is “savoie”, thus in French Savoy Cabbage is called “choux de savoie”.

In Italian, Savoy Cabbage is referred to as being Milan or Lombardy cabbage (Milan being in Lombardy, and Lombardy being part of the House of Savoy, too, at the time.)