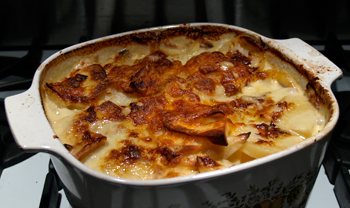 Contents hide
To scallop has two different meanings in cooking.

One possible meaning could be to give something an edge consisting of a series of semi-circles. This is how the term is used in furniture making and dress-making. Sometimes, though not often, pie crust edges are said to be scalloped when this effect has been done to them. The edges of watermelon or melons when cut in half in such as way as to leave an edge with this effect are also said to be scalloped. The idea is that the edge looks like a series of scallop shells, though in looking at your great-Auntie’s effort with her peach pie there’s no reason it couldn’t be said to be a clam shell, or something only a palaeontologist could identify.

The other meaning is far more prevalent, yet far harder to figure out what it actually has to do with scallops, the seafood. It’s applied to dishes to describe a style of cooking. There can be scalloped potatoes (the most well known), scalloped corn, scalloped tomatoes, etc. What all of these have in common is that they are cooked covered in bread crumbs.

Most people presume that “scalloped” also involves a cream sauce, because they are thinking of scalloped potatoes, which does. However, that isn’t usually the case with scalloped tomatoes. Most recipes for scalloped tomatoes just have them dotted with butter and then sprinkled with breadcrumbs; occasionally some grated cheese is sprinkled on as well.

So are breadcrumbs the determining factor in making a dish scalloped? It may have been at one time, but many people now make scalloped potatoes with a cream sauce, but no bread crumbs. (Though why on earth you’d pass up any opportunity to have buttered bread crumbs is past knowing.)

A few people speculate that for a dish to be called “scalloped” there needs to be grated cheese happening, but many dishes said to be “scalloped” don’t involve cheese. In fact, “scalloped potatoes with cheese” already has a name — it’s called “Potatoes Dauphinois” (or Gratin Dauphinois, to give it its full French name.) Besides, the more people hear of all these extra bits on scalloped potatoes such as breadcrumbs and cheese, the more they will just become convinced that they were truly cheated at their childhood dinner table.

It’s a trickier matter trying to deduce how scalloped come to be applied to potatoes in the first place. One way might have been a transference of ideas from “scalloped oysters.” Scalloped oysters were first cooked in scallop shells, sprinkled with bread crumbs. This may have come about because oyster shells are actually pretty grubby looking, whereas scallop shells clean up very presentably, far more suitable for putting on someone’s plate to impress. At some point, a variation arose that had a cream sauce being applied to them as well, and at a later point, the scallop shells were dropped altogether and the oysters were simply arranged in a baking dish, then covered with sauce and crumbs.

With the “scalloping” technique now completely divorced from scallops, the term could be freely applied to other dishes that had nothing at all to do with seafood.

There is another explanation for how scalloped potatoes came to be called that. An older English word, “collops”, meant, among other things, slices of meat. It’s very closely related to the French word, escalope. The word came to mean slices in general, generally thick. In Yorkshire, a dish called “collops” was thick slices of potato, fried until brown.

At the same time, there was linguistic confusion between “scollop” and “collop” — with “escalope” no doubt stirred into the mix by anyone who knew French cooking terms. Hannah Glasse (1708-1770) in The Art of Cookery Made Plain and Easy (1747) lists a recipe for “Collups of Oysters”, which is oysters cooked in scallop shells. This may show the start of the confusion between the word “scollops” (as it was then spelt) and “collops.”

In North America, there is in any event general agreement that Scalloped Potatoes should include sliced potatoes with a dairy-based sauce, which is either milk or cream or a white-sauce poured over the potatoes. You may or may not get grated cheese and/or breadcrumbs happening beyond that, depending on how cheated you were as a child.

In the UK, there is not any general agreement on what Scalloped Potatoes are. Some people make them the North America way, influenced no doubt by the recipes of North America. Others have other ideas, though. You will see some Brits looking for scalloped potato recipes that don’t require meat as an ingredient — the very thought of which would startle Middle North America. Some British recipes use cheese, but no milk or cream sauce. And, to many people, their notion of Scalloped Potatoes does indeed hearken back to the word “collops”: leftover potatoes sliced and shallow fried in a pan another day, ideally in beef dripping or bacon fat.

All of these do have one thing in common though: the potatoes are sliced. Perhaps all our Scalloped Potatoes really have been “colloped” potatoes all along.

“Long Branch Milk Potatoes: Take good, sound potatoes, cut them in slices (raw) and put the milk, according to the quantity you wish to make, in a pudding dish; then after you have put the potatoes in the milk, put it in the oven for about 20 minutes; then take out and put potatoes, with the same milk, into a saucepan to boil until done; season before you put them to boil.” – Author not given. The Fresno Republican. Fresno, California. 19 July 1879. Page 6.