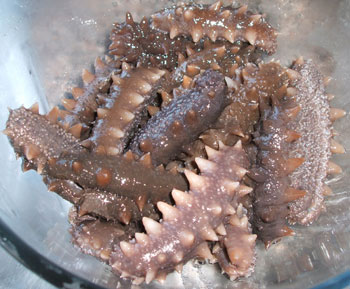 A Sea Cucumber is an animal that lives on the ocean floor.

It has no real flavour; rather it is appreciated for its “squelchy rubberiness” that Chinese call “kou gan” (“mouthfeel.”) Many Westerners can’t get their heads around eating it, saying it has the consistency and texture of a squelchy, decaying finger.

Sea Cucumbers are scavengers, living on the ocean floor off detritus such as decaying organic matter. There are many sub-species, many of which are harvested for food or medicine.

Their leathery skin will vary in colour by species, and have bumps or spines on it. The animals have long bodies, growing from 4 inches up to 16 inches (10 cm to 40 cm) long, depending on sub species. The largest one, Tiger’s Tail Sea Cucumber (Holothuria thomasi), grows up to 7 feet (2 metres) long. They have small tentacles around their mouth which bring food in. Despite having no brain, they live 5 to 10 years.

Sea Cucumbers can squeeze themselves through small spaces. Some types can defend themselves by releasing a chemical called “holothurin”, which does not affect humans, but which is toxic to other sea-life in the area. They are preyed upon by fish such as haddock.

They live in large numbers together, and are able to float when they want to, or rest on the seabed.

When caught for food, their insides are cleaned out, then they are washed, then boiled in salt water, then smoke-dried (unless they are being sold fresh.) To use dried ones, you must soak them in cold water for at least half a day, then simmer them for 1 to 2 hours, then let drain and cool. You use them sliced in soups, stews and stir-fries. Whole ones can be filled with a pork stuffing.

They can also be pickled. Namako Chaburi is Sea Cucumber marinated in tea and served with vinegar on it.

In Japan, the insides are treated as a separate food item called “konowata” and served on “gunkan” style sushi.

There is concern that Sea Cucumber is being overfished now in some areas, certainly in Asia. In China, they are now being farmed.

Connor, steve. Ready to acquire a taste for the ‘vacuum cleaners of the sea’? London: The Independent. 3 February 2011.

Food and Agriculture Organization of the United Nations. The trouble with sea cucumbers. 1 April 2009. Retrieved August 2010 from http://www.fao.org/news/story/en/item/11225/icode/

This web site generates income from affiliated links and ads at no cost to you to fund continued research · Information on this site is Copyright © 2021· Feel free to cite correctly, but copying whole pages for your website is content theft and will be DCMA'd.
Tagged With: Chinese Food