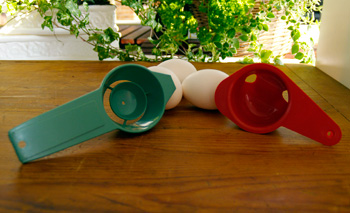 Egg yolks have very different effects in cooking from egg whites. Egg yolks enrich and thicken; egg white can give volume and act as a binder. Many recipes want only the yolk or the white; and some of those that want both, still have you separate them anyway so that they can be “processed” separately in your preparation in order to gain maximum benefit from the special properties of each.

While it’s usually not a problem to have a little egg white in egg yolks, the opposite is not true: egg whites on their own are almost always meant for whipping to create volume, and any egg yolk in them will reduce the volume that is achievable.

Eggs can be separated either using some kind of kitchen tool, or by a technique that requires no tool at all.

Whichever way you are doing them, eggs separately most easily when they are cold. And the eggs should be washed first. Washing won’t do much for things such as salmonella, which needs a temperature of 110 F (43 C) to kill it, but it won’t hurt, and you’ll certainly want to wash them if you’ve bought your eggs at the farm gate. Even if the eggs have been well-cleaned and sanitized by the producer, s/he has no control over what happens to them after they’re sold on. And, to be really cautious, separate eggs over an empty bowl — not the one you already have other ingredients in. That way, if things go wrong — the yolk breaks, the shell shatters into a zillion teeny shards — it’s easier to correct. That being said, though most cooks will tell you this, not many practise what they preach in the normal flurry of everyday life.

There are special kitchen tools called “egg separators.” They can be made of metal or plastic, and will be a little bigger than a tea strainer in size. The general design is vaguely like a bowl with a handle attached to it. The base of the bowl has a solid cup area, which catches and hold the egg yolk, and surrounding it, slots or holes to allow the egg white to drain through. Most government health authorities will recommend that you use these, because this method involves less contact of the egg with the outside egg shell, reducing the risk of the yolk and white picking up any contaminants from the shell. Many cooks, though, feel that an egg separate is just extra clutter, because it’s pretty much a single-purpose tool.

You can also use a funnel as an egg separator. Stand the funnel up in a cup, glass or measuring jug, and crack the egg into the funnel. The white goes down the funnel’s tube; the egg yolk (assuming it’s made it his far intact), will stay up in the funnel’s bowl. To remove the egg yolk, tip the funnel into a small bowl or cup.

When separating an egg without the aid of many tool, most cooks, as noted above, just crack it over the bowl they are mixing things in, and get on with it. A proper “home economics” method though would require three bowls. You designate one as the egg white bowl, one as the egg yolk bowl, and one as the “working bowl.” Hold an egg at one end, and hit the egg sharply against the side of the working bowl. With experience, you quickly learn how hard is too hard; how softly is not hard enough. In fact, the secret is all in that first crack. Aim to make the crack as close to the middle of the egg as possible. Then, holding the egg over the working bowl, pry the egg open (experienced people can do it with the fingers of one hand, but there’s nothing wrong with using both hands.) Most of the egg white will drain off into the bowl — use half of the shell to held hold the yolk back. Then, pass the yolk back and forth from one half of the shell to the other, until all the egg white has drained off. This shouldn’t take more than two or three passes. Deposit the yolk in the egg yolk bowl, transfer the successfully obtained egg white into the egg white bowl, then repeat with a new egg until you have all your eggs separated.

The purpose of the working bowl is that should your separating process go all pear-shaped and you end up with a bunch of yolk in the egg white, you haven’t ruined all the correctly separated eggs that you’ve done so far.

Instead of passing the egg yolk from shell half to shell half, some people slide the egg yolk onto the closed fingers of their free hand, and let the egg white drain through their fingers.

To separate a very large quantity of eggs, such as a dozen or more, start with cold eggs. Break them all into a large mixing bowl. Use your hand to scoop out the yolks, letting the egg white run through your fingers back into the bowl (the yolks may break if the eggs you are using are room temperature.)

Despite eggs being easiest to separate when cold, egg whites are best whipped with room temperature. You’ll get more volume. Cover the bowl they’re in with a plate or plastic wrap, and let stand for 30 to 60 minutes to warm up before beating. If you’re in a hurry, you can try setting the bowl in a sink or pan of lukewarm water, but that can be futzing time that is better spent doing something else while the egg whites warm up naturally.

Old-time cooks advise that should shell end up in your separated egg, there’s nothing better to scoop it out with than half a shell. Modern government health board, people, though, don’t want us dipping the shell back into the separated eggs.

White strands attached to the yolk are called “chalazae.” They perfectly fine to eat, but they can get tough when cooked — you may wish to remove the larger ones.