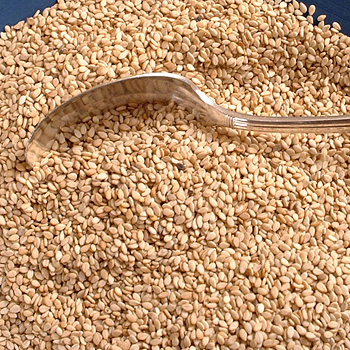 Sesame Seeds are oil-rich seeds with a mild, nutty flavour. European recipes generally want white sesame seeds, while Indian or Asian recipes may mean black sesame seeds which have more aroma. The seeds can also be brown or red. In North America, they are popular on hamburger buns and on bagels.

The seeds come from a plant that is native to East Africa or Indonesia. The plant is an annual herb, growing almost 1 metre (about 3 feet) tall. As the seeds mature for harvesting, they will split open easily, causing seeds to fall on the ground. For this reason, Sesame Seeds are still harvested by field hands rather than by machines.

Tahini is made from sesame seeds.

If just “Sesame Seeds” is mentioned in a recipe, white sesame seeds are meant. There are also black sesame seeds.

The seeds can also be sprouted. They will take 1 to 3 days to germinate, and will keep refrigerated for up to a week.

Generally, seeds should be toasted before using, as the untoasted seeds don’t have much taste.

Sesame Seeds have a high, unsaturated fat content which can go rancid quickly at room temperatures. (As for all things, just how quickly will of course depend on what the room temperature of your kitchen has been the past while). So, store in a tightly-sealed container in refrigerator for up to six months. Or, freeze them for up to a year.

Fresh sesame seeds will be yellow or cream-coloured. Old or rancid ones will look greyish.

This web site generates income from affiliated links and ads at no cost to you to fund continued research · Information on this site is Copyright © 2022· Feel free to cite correctly, but copying whole pages for your website is content theft and will be DCMA'd.
Tagged With: Ancient Greece, Roman Food, Sesame Seeds