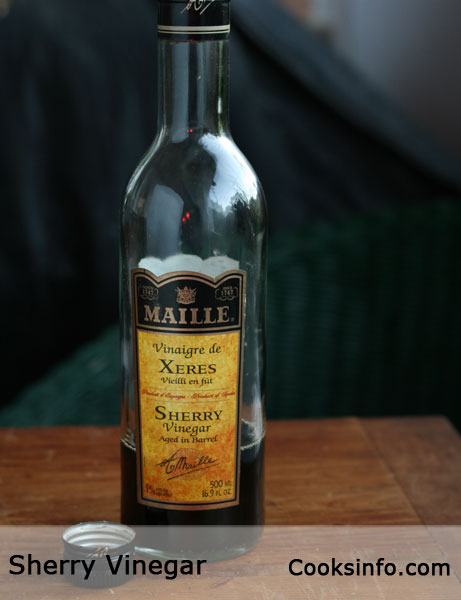 Sherry Vinegar is a vinegar made from a blend of wines from Palomino Fino grapes.

It is aged for a minimum of six years in wooden barrels that previously held sherry. The barrels are arranged in tiers, with the oldest vinegar being in the bottom row and the youngest vinegar being in the barrels on the top row. When bottling is done, about 1/3 of the vinegar is removed from the oldest barrels, then bottled. These barrels are topped up with medium-aged vinegar from one of the middle rows, and these in turn are topped up with vinegar from the top, youngest row.

Many chefs swear by sherry vinegar in their cooking.

Under EU law, vinegar labelled sherry vinegar can only be produced in the Jerez region of Spain.

A 250ml bottle of Sherry Vinegar aged 50 years will set you back a modest $20 US (2002 prices), which is not bad compared to some other aged vinegars.

Use a good Sherry Vinegar as you would balsamic.

‘A well made sauce will make even an elephant or a grandfather palatable.’ — Grimod de la Reyniere (French gastronome. 20 November 1758 – 25 December 1837)