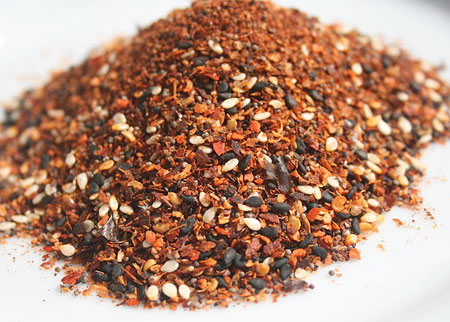 Shichimi Togarashi is a Japanese spice mixture made from 7 spices. It is not the same as Chinese Five Spice mixture.

The ingredients usually include items from the following list:

Some people suggest using equal parts of everything. Others will increase the portion of red pepper flakes.

Shichimi Togarashi is sold already ground and mixed. In Japan, it is also now sold with the whole individual spices in a spice jar with a mill on top so that it can be ground “fresh.”

Shichimi Togarashi can be used as a garnishing condiment spice at the table, or, in recipes in the kitchen.

At the table, you can sprinkle it on soups and noodle dishes, or any food you like.

In the kitchen, you can crust fish, seafood and meats in it, or coat rice cakes, etc, with it. Can be used in marinades or as part of a dry rub. Nice sprinkled over stir fries towards the end of cooking

You can mix up your own Shichimi Togarashi, swapping in black peppercorns for the Szechuan Peppercorns. Some Shichimi recipes even call for chilli powder, which no doubt would have purists shuddering. But given that most Shichimi recipes will still have you combing grocery stores and ethnic markets for hemp seeds, dried nori, dried orange peel, Szechuan Peppercorns, etc, you’d do just as well to keep your eye out for a bottle of it while you’re at it and be done with it.