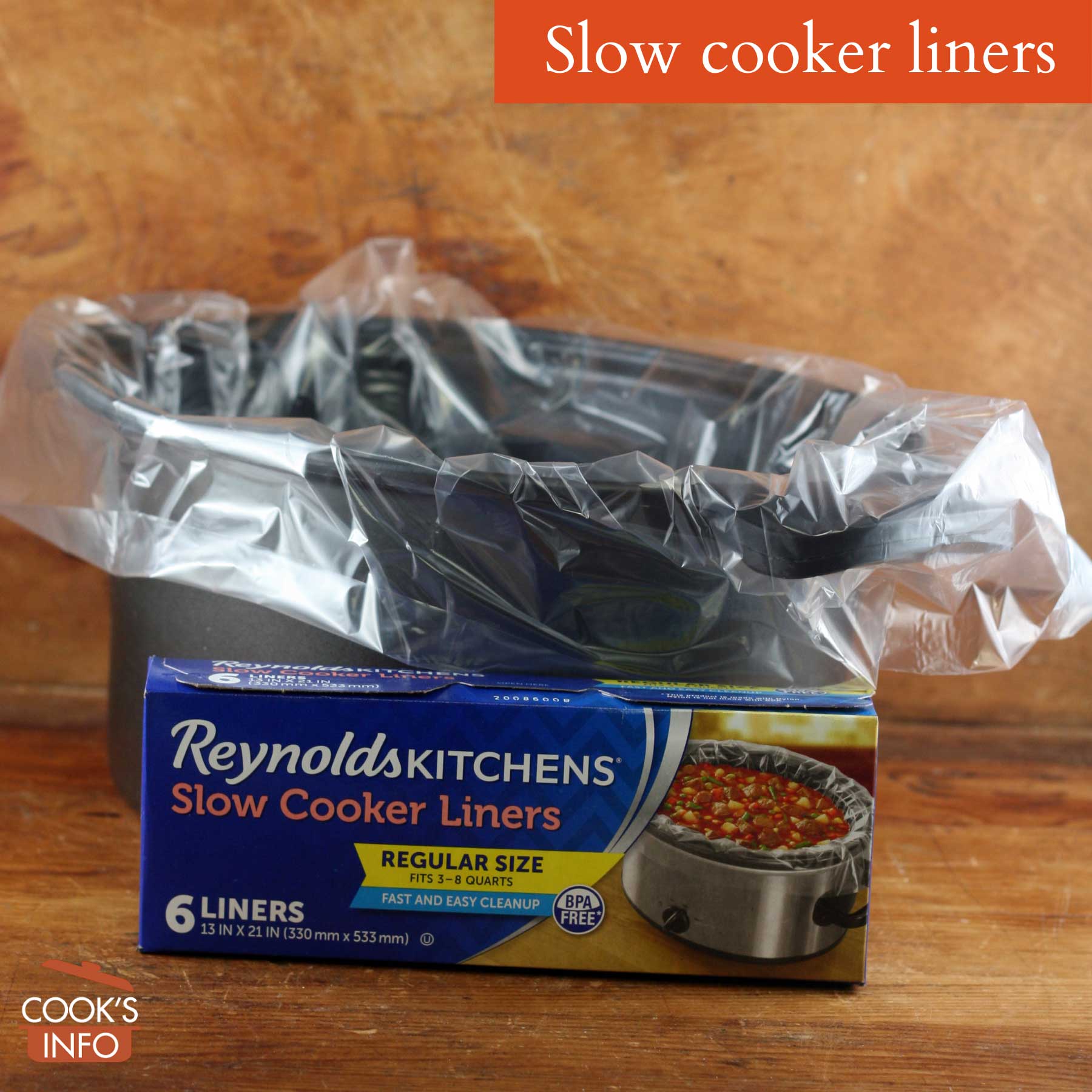 Slow cooker liners are “plastic” sheets used to line the insides of slow cooker crocks. They are designed to eliminate the soaking and scrubbing often required of slow cooker pots after using them.

They are made of nylon resin or mylar. There are several different brands, including store brands. You may see them sold under names such as “Slow Cooker Liners” or “Slow Cooker Savers.”

Manufacturers of oven bags don’t recommend trying to use them in slow cookers:

“Reynolds® slow cooker liners were specifically developed and sized for use in slow cookers, while oven bags were designed and sized to hold large cuts of meat for pan-roasting in the oven. There is enough of a size and shape differential between the products that we recommend using each product for its intended use.” [1]Reynolds Kitchens: Products: FAQ. Reynolds® Slow Cooker Liners. Retrieved February 2011 from http://www.reynoldspkg.com/reynoldskitchens/en/faq_detail.asp?info_page_id=748&prod_id=3200&cat_id=1337

Liners will come in different sizes, typically delineated in U.S. quarts, for different capacity slow cookers. Some brands, such as Reynolds, may also be certified Kosher.

Slow cooker liners are not for oven, broiler, toaster oven, or barbeque grill use.

Don’t use them to store food inside them in the fridge. You can, however, line a slow cooker crock with one, put the food in it, cover and refrigerate, then cook later.

Don’t lift the liner up with food inside it; serve food directly from the lined slow cooker crock. When the slow cooker has completely cooled, use a spoon, etc., to remove any remaining food, then remove the liner and discard. 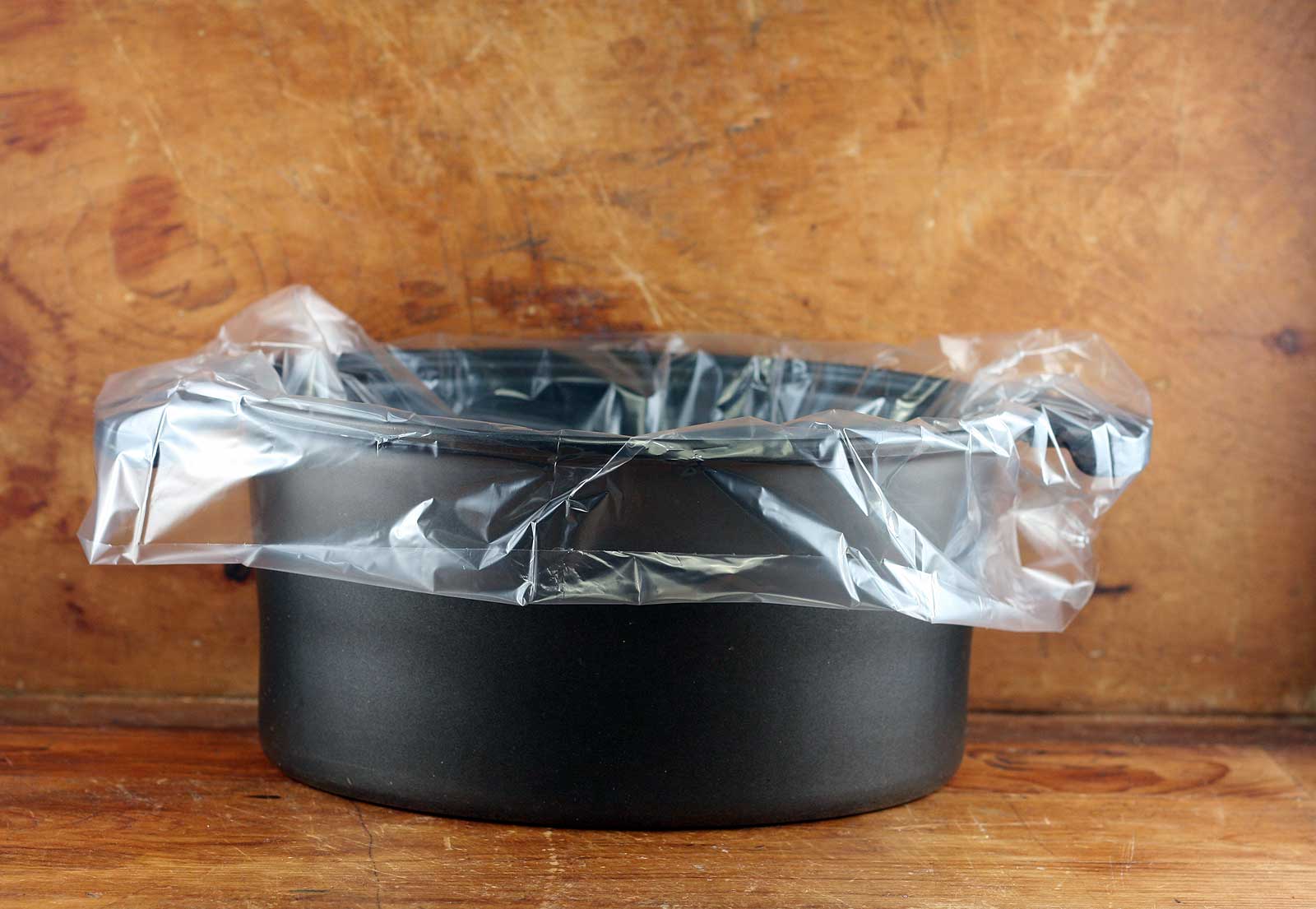 Some people complain that they buy the liners, and forget to use them — a tip from fans of the liners is to try storing the box of liners inside the slow cooker, where you’re bound to spot it when you reach for the slow cooker.

As with any product, there are fans and detractors. Some say that you don’t need them: that simply soaking the crock in hot soapy water, sometimes with a handful or two of baking soda in it, easily solves any cleanup problems. Some say that spraying the inside of the crock with cooking spray first before putting food in will do the same job. Still others say they just don’t like the idea of adding to landfill with yet more single-use disposables.

Others say that it’s just as environmentally unfriendly to be running all that hot water and using soap and other chemicals to soak and scrub a crock, and that those costs, combined with the time saved, easily make the product idea a winner.

Slow cooker liners are particularly popular with the motorhome community, because of the cleanup hassle in limited space (with limited hot water) that the liners can save.

Note that if you are using a slow cooker liner, you don’t need to spray the inside of the crock with any cooking spray first; it would just be a waste.

And note as well that the liner only covers the inside of the crock, so you will still have to wash the lid, and the outside of the cooker if there were any spills or slops, etc..