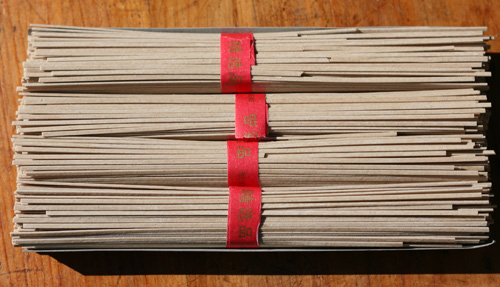 Soba Noodles are noodles made from buckwheat and wheat flour — the ratio will vary by brand. Often the dominant ingredient is the wheat flour.

Water is added to the mixed flours to make a dough, then kneaded, then let rest a bit.

Then it is rolled out and cut into strips.

There are several types of soba noodles. The most esteemed ones come from Nagano, Japan.

You can buy soba noodles fresh in Japan, but they are easier to find dried.

They are eaten with chopsticks. It’s customary to make a slurping noise while eating them.

There are also some pure soba noodles made wholly from buckwheat flour. They are much harder to make. In Japan, they are called “kiko uchi.”

Cooking time can vary by brand and type of soba noodle. But in general, cook for 8 to 10 minutes in boiling water, then drain and plunge into cold water. If the noodles stick together, they were cooked too long.

Soba noodles seem to have appeared around the middle of the 1600s, though some date the noodles back to the 700s. Prior to that, buckwheat flour was just mixed with hot water to make a warm gruel.