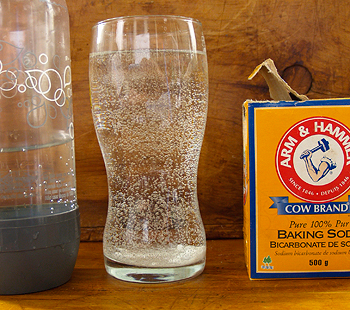 Soda Water is carbonated water with a small amount of sodium bicarbonate (aka Baking Soda) in it.

It is not the same as plain carbonated water because of this addition. It is saltier tasting than most sparkling (aka carbonated) mineral waters. Because of the sodium bicarbonate in it, people often drink it to relieve mild indigestion.

It is used in making many cocktails. When people order a Scotch and Soda at the bar, they expect it to come with Soda Water — carbonated water that has at least a trace amount of sodium bicarbonate in it (though some Scotch aficionados think that anyone who would do this is deranged.)

In North America, it is often generically referred to as “Club Soda.”

If in North America the ingredient list on a bottle or can of Club Soda (aka Soda Water) seems identical to that of Seltzer Water (aka Carbonated Water), then the difference will come out in the nutrition list: there you’ll find that Club Soda has sodium in it. Ingredients in Canada Dry Club Soda are: Carbonated Water, Sodium Bicarbonate, Sodium Citrate, Potassium Sulfate, Disodium Phosphate.

If you’re still not convinced that there’s a difference, set a glass of Soda Water next to a glass of Carbonated Water.Let them both go flat over night, then taste them in the morning. The taste difference will be more pronounced.

It is sold directly to consumers in cans or bottles. 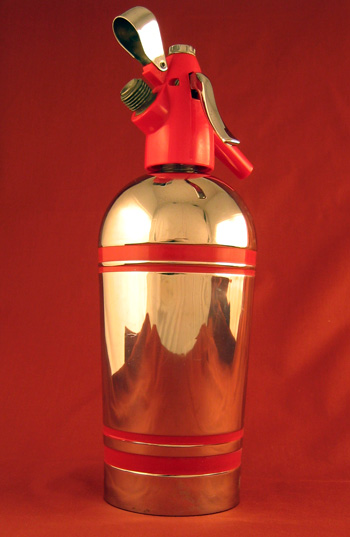 Soda water can be made at home with a soda siphon bottle. You put about a teaspoon of baking soda in the bottle, then fill with plain, still water. You screw the lid on, shake well, then attach and release the carbon bomb into it. You can also buy packs of sodium bicarbonate tablets to use instead of sodium bicarbonate out of the box.

If you’re planning on providing Soda Water for a party, it can be best to buy it in bottles or cans, rather than spending all night keeping the soda siphon made up and filled.

In North America, Club Soda is now a generic term. Cantrell & Cochrane Company filed for a US trademark on 1 September 1905, and received one: #71012135. The trademark is now listed as expired.

This web site generates income from affiliated links and ads at no cost to you to fund continued research · Information on this site is Copyright © 2023· Feel free to cite correctly, but copying whole pages for your website is content theft and will be DCMA'd.
Tagged With: Water