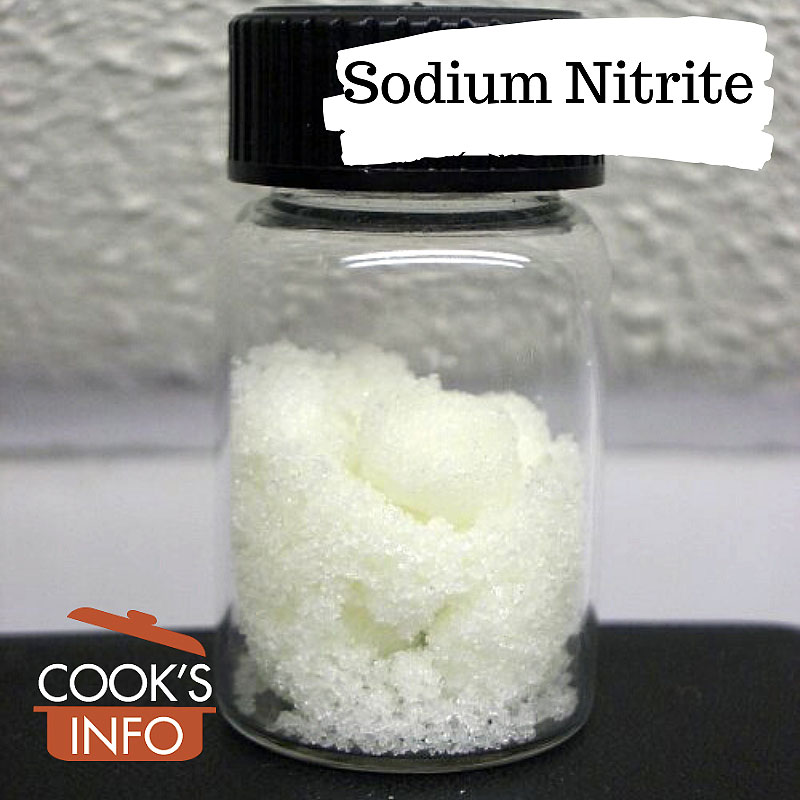 It helps prevent food from going rancid, and controls bacteria which can cause botulism and kill you.

It also helps hold colour in preserved meats or fish. Some of the nitrites in it convert to nitric oxide, which interacts with myoglobin in meat, forming red nitric oxide myoglobin. This turns bright pink when the meat is smoked, giving preserved meat a pleasing pink colour.

It comes in white or yellowish powder or granules.

Some people raised concerns as to whether sodium nitrite is safe. It has been pronounced safe in America by both the Food and Drug Administration (FDA) and the Department of Agriculture (USDA), based on 1981 and 1982 reports from the (American) National Academy of Sciences. The American Cancer Society backed them up again in their support of Sodium Nitrite in their 1996 dietary guidelines.

In America, the maximum amount by law in cured meat is 200 parts per million, though in practice the amounts used commercially end up being just about 1/10th that. Only about 5 % of nitrites that a person takes in will come from cured meats — the rest coming from water and vegetables such as carrots, lettuce and spinach.

The human body also produces it naturally when the saliva interacts with sodium nitrate, to help control stomach bacteria. In fact, your body produces more than you will probably take in by eating.

If your body were free of nitrites, you might develop gastroenteritis.

Despite all this, the myth just won’t die and go away, and the scare-mongers continue to generate copy advising people to avoid it — something clearly impossible given that your own body makes it.

The scare-mongers neglect to address the good old-fashioned topic of a relatively faster-death from botulism.

This web site generates income from affiliated links and ads at no cost to you to fund continued research · Information on this site is Copyright © 2022· Feel free to cite correctly, but copying whole pages for your website is content theft and will be DCMA'd.
Tagged With: Curing, Technical Terms