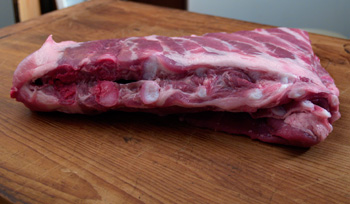 Spare Ribs are the most expensive of the rib cuts from a pig.

They are cut from the lower rib cage of a pig’s carcass; more precisely, from the belly, starting just behind the shoulders.

To be called Spare Ribs, the cut must contain at least 11 ribs; a full slab will have 13 ribs.

They are juicy and tender owing to a good amount of fat in them.

They may or may not have the brisket bone removed. The skirt meat is left on. This is a flap of meat on the inside of the sparerib. Being all lean, it tends to get quite dry and chewy after cooking. For St Louis Style ribs, this is either removed altogether, or trimmed on its outer edge.

When purchasing spareribs, allow 700g (1 1/2 pounds) per person (varies wildly based on what else you’re serving with the meal.)

Per sparerib slab, 2 to 4 servings.

For cooking instructions and other advice, see main entry for Pork Ribs.

The English word “spareribs” was influenced by the German word “rippenspeer” which meant “rib spears.” In English, the word became “ribspare”, and then “sparerib.”

Think of it as not meaning “extra ribs”, but rather as meaning “spear of meat.”

Spareribs can be spelled both as one word or as two words.