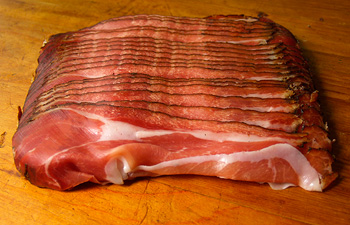 Speck dell’Alto Adige is a piece of meat and lard from a pig, processed to become a charcuterie that is served raw in thin slices. It is made in South Tyrol [Südtirol], Italy.

The overall ratio of the piece of meat should be 1/2 meat, 1/2 lard. Outside, the piece is a brown colour. Inside, the meat is pink, and the fat white or pale pink.

The meat is taken from the thigh (coscia), belly (pancia), loin (costata) or shoulder of the pig; Alto Adige Speck made from the thigh is considered the best.
The meat is deboned, then spread open, trimmed and shaped into rectangular blocks. It is then spread with a curing mixture which varies by producer: a sample mixture would be a base of coarse salt, sugar, and nitrates, flavoured with spices such as juniper berries, bay leaves, cinnamon, nutmeg, coriander, garlic, paprika, and black pepper. It is allowed to cure for 20 days, during which time the curing mixture is often reapplied.

The product received its European PGI status in 1996. The PGI is administered by the “Consorzio Promozione Speck Alto Adige” in Bolzano.

The speck used to be made from only local pigs, but the standards were loosened. It can now made with pigs from anywhere, often coming from as far away as the Netherlands. If you want it from local pigs you have to buy “Südtiroler Bauernspeck Alto Adige” (“farmer’s Speck”), a specialized, premium version.

Eaten as is; needs no cooking.

This web site generates income from affiliated links and ads at no cost to you to fund continued research · Information on this site is Copyright © 2021· Feel free to cite correctly, but copying whole pages for your website is content theft and will be DCMA'd.
Tagged With: Italian Food, Protected Geographic Indication