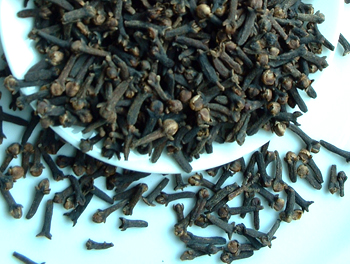 The buds grow at the ends of branches in bunches. The tree can be harvested of its buds after it is 5 years old. After that, each year a tree will produce about 7 pounds (3 kg) of buds. When the buds first appear on the branches they are a pale green, but then they get darker. They are harvested before they can open. After harvesting, they are blanched for a few seconds in boiling water, then dried in the sun to about ⅓ of their starting size.

Cloves have a strong, warm, sweet flavour. Today, they are grown in Indonesia, Brazil and Madagascar.

Indonesian cigarettes called “kretek” use Cloves to flavour them. Cloves are also used in Worcestershire Sauce.

Clove oil is produced from other parts of the tree, such as the leaves and branches. The essential ingredient in the oil is called “eugenol.”

Cloves can be used either whole or ground; when used whole, the Cloves are usually removed before serving.

Eugenol, the essential oil in Cloves, is still used in some mouthwashes today. It also has local anaesthetic properties, thus the old common usage of Cloves for toothaches.

Clove trees are native to the Moluccas chain of islands; only the Arabs knew they where they came from, and they weren’t saying.

The Chinese used Cloves as mouth freshener in 300 BC (at least, those that could afford them — Cloves were of course a great luxury). Egyptians were using Cloves by 100 AD. Cloves were introduced to Europe sometime between 300 and 500 AD by the Romans. Arab traders brought Cloves to Europe in the time of the Romans; they were very expensive in Rome. By the 8th century, they were known throughout Europe.

The Dutch found out the Arab secret of where the Cloves came from in the 1500s. The Dutch, instead of breaking the trade monopoly, decided not only to take it for themselves, but to tighten it: they allowed Clove trees to grow only on one island of the Moluccas, an island called Amboina, and had the trees on all the other Moluccas islands destroyed. In the 1700s, the French (thanks to a man named Pierre Poivre) broke the monopoly by smuggling trees off of Amboina and taking them back to Mauritius.

Our word “Clove” comes from the Latin word for nail, “clavus”, because of their resemblance to nails (old-fashioned ones, at any rate).