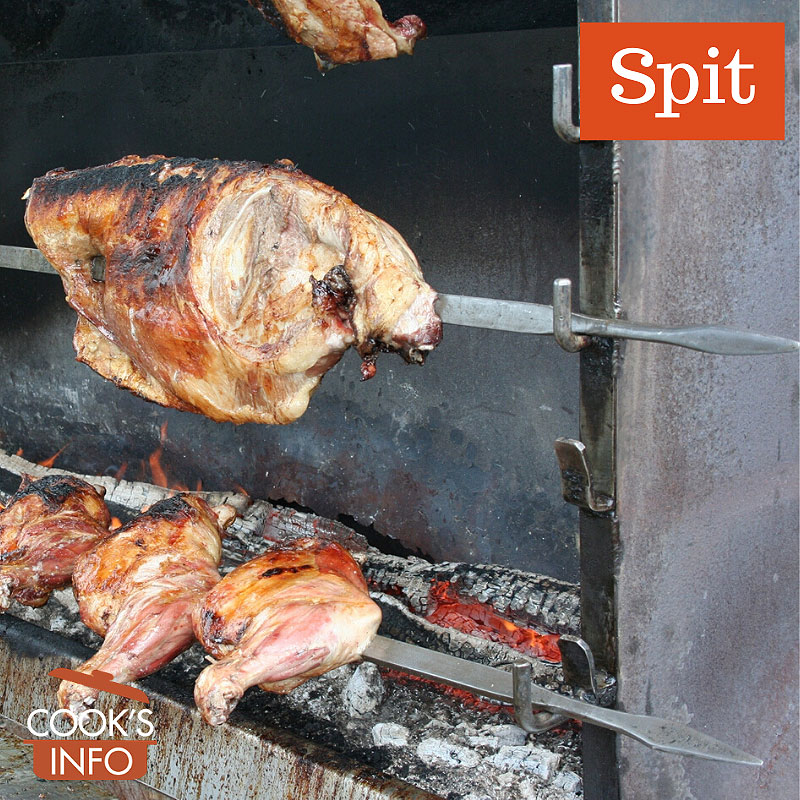 Spit roasting the carcass of a whole animal can be the focus of a village fete or a family reunion, with the pit being the ultimate focus of all the activity.

Basting meat during spit roasting promotes pleasing coloration; it will not make the meat moister — only fat in the meat does that.

Most people think of spits as going horizontally, but there are also vertical ones.

Horizontal spits are revolved over cools. Often a spit design is that of a metal bar at least 1 ½ metres (5 feet) long, with two cross pieces towards either end for attaching front and rear limbs to. This allows you to cook the animal splayed out, if you choose. Alternatively, you can wrap the animal around the spit. Doing this allows you to stuff the inside of the animal and stitch it up with wire or thread. The entire long bar is held above the source of heat by two upright poles, ideally metal, and ideally, such that will allow for height adjustment. Hand-turned ones will have a handle at one end for revolving the spit; most people these days rig up motors, either gas or electric-powered, to do the revolving for them.

Asado spit roasting is a vertical style of spit roasting done in Argentina. The carcass of the animal is split open, and affixed to a t-shaped shaped metal bar. The hind legs are attached to the cross-bar forming the “t.” The rods used tend to be flat, about 2 to 3 cm (1 inch) wide, ½ cm (¼ inch thick. The whole rod is stuck into the ground at a 45 degree angle, and the coals below kept at a very low heat. It is not rotated or revolved during cooking, just turned around half-way through cooking.

Another vertical style used throughout Europe was called a clockwork spit. The meat would be hung from a hook in the earth to cook. Above the hook would be a clockwork mechanism, which you wound; the clockwork mechanism would slowly cause the meat to revolve. Some had instead fans on them, which were turned by the rising hot hair, and turned the spits in turn.

Affixing meat to the spit

The critical thing in spit-roasting, particularly on a spit that revolves, is fixing the meat firmly to the spit. As the meat cooks, it will shrink, and get loose. You need to wire the meat on firmly, though not so tightly that the wire will cut through and cause chunks of the meat to drop off, defeating the purpose. The meat must also be balanced on the spit, so that it won’t go whallomp, whallomp as it turns. To achieve this, you have to make the spit the centre of gravity for the meat, and have all limbs tied up. 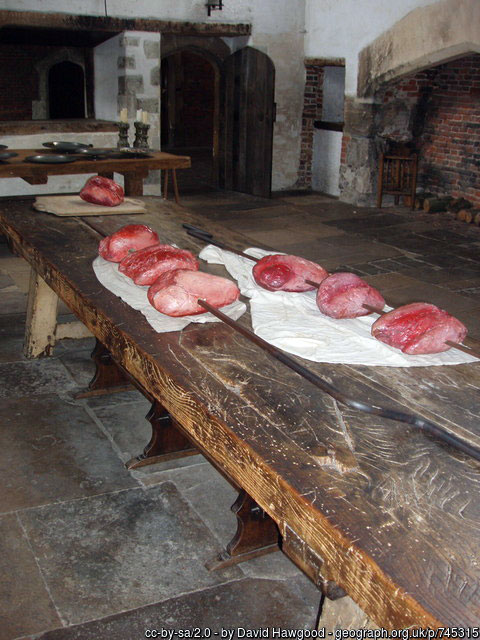 A whole lamb being spit-roasted generally has the head and neck removed. For asado-style pit roasting, the lamb kidneys and the fat around them are not removed, as is done in other roasting traditions, but rather left in, and served first to a guest of honour. A whole pig will have the head and tail left on, and the kidneys removed. Pig is easier to cook than lamb, because its meat is protected by more fat and a tougher skin, helping to prevent burning.

Parts of larger animals which will cook more quickly (such as the tail, snout, and ribs of a lamb) may be covered with tin foil for most of the cooking and uncovered only toward the end to brown, so that they don’t burn. The hind end and shoulders of an animal are the thickest and will take the longest to cook.

Fat will drip out of a duck on a spit almost continually. 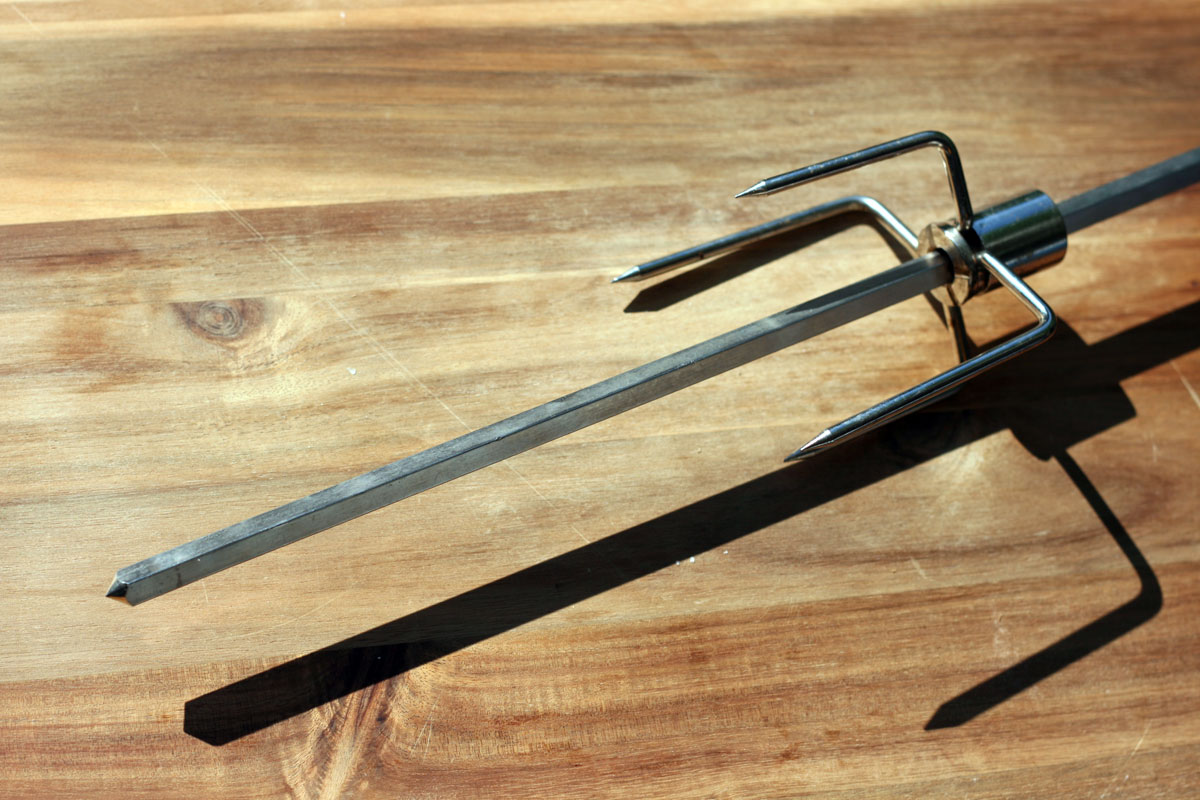 As after any roasting, allow meat to rest for 15 to 30 minutes before carving.

Allow 150 g to 250 g (⅓ to ½ pound) of meat per person at a spit roast. When calculating servings, count on half of the dressed weight after cooking. “Dressed” weight means after gutting and skinning.

Spit cooking is quite probably the oldest cooking method, because it just would have involved putting meat on a stick and holding it over a flame.

In a kitchen hearth, the spit stand would be set up at the front of the hearth, with the heat behind it. Thus, it wasn’t directly over the heat. Beneath the spit would be the bricks or stones of the floor of the hearth, where you you could put a dripping pan there to capture the precious dietary fat at a time when it was scarce.

Spits were mostly in wealthier homes, where they definitely would have pans underneath to catch these drippings. There would often be a chain or clockwork mechanism to turn them “automatically.”

Still, in Europe, the meat was often boiled before being roasted (a habit the English railed against.)

Nancy Jackman, an English cook in the first half of the 1900s, recalled:

“Our kitchen had no mod cons and also even had one or two strange outdated features. It had a spit jack, for example. Built with a weight on a pulley, the spit jack had a crude, clock-like series of wheels and gears and with a big weight attached it slowly turned the massive roasting spit above the fire. The weight would take about fifteen minutes to reach the ground and all that time you could get on with other tasks safe in the knowledge that your roasting pig would be evenly cooked on all sides. The spit was attached to the great beam across the chimney breast. In really big houses they attached the spit to a small wheel and kept a specially trained terrier to run around inside it when the roast needed to be turned.” — Jackman, Nancy. With Tom Quinn. The Cook’s Tale. London: Hodder & Stoughton. 2012. Page 179.

This web site generates income from affiliated links and ads at no cost to you to fund continued research · Information on this site is Copyright © 2023· Feel free to cite correctly, but copying whole pages for your website is content theft and will be DCMA'd.
Tagged With: Barbeque, Meat Cooking Tools, Roasting Meat, Roasts, Spiedies