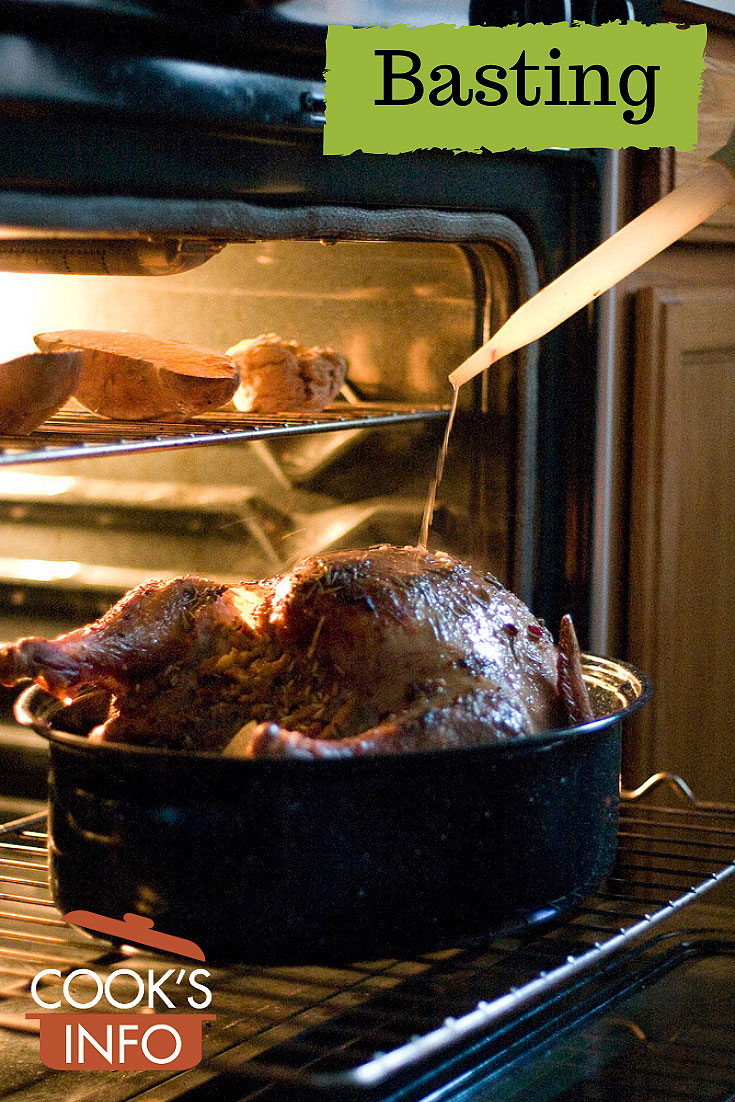 Turkey baster in use with oven door open It is recommended instead to take the food from the oven, close the oven door, baste, and then return the food to the oven. Ethan Lofton / wikimedia / 2007 / CC BY 2.0

Basting is “anointing” food that you are cooking with a liquid, either a sauce, a broth, or the drippings of juices and fats from the meat.

It is done when roasting, grilling and barbequing.

Basting a turkey or chicken

Basting poultry does not help to keep the meat moister. The fat you baste a bird with just runs right off, back into the pan. Cooks Illustrated says,

“… many turkey recipes call for basting. So we ran a few tests to see if this was a necessary step. The verdict? Don’t bother. Basting does nothing to moisten dry breast meat. The liquid just runs off the turkey and it actually turns the skin soggy. Basting also means you have to constantly open and close the oven, meaning you lose heat and have to cook the turkey for a longer amount of time. So skip the baste; it wastes time and turns out to be counter-productive. If you’re really concerned about moist breast meat, then brine or salt the bird before cooking it and be careful not to overcook the bird.” [1]Cooks Illustrated. How to Brine a Turkey and How to Salt a Turkey. Accessed January 2020 at https://www.cooksillustrated.com/articles/94-how-to-brine-a-turkey-and-how-to-salt-a-turkey

Some say that it can be useful to baste in the last 15 minutes or so of cooking, especially with fowl, as it improves the skin. But Cooks Illustrated disagrees and says it can actually have a detrimental effect on the skin: “As a matter of fact, basting in the last hour of roasting can actually turn crisp turkey skin soft.” [2]Hays, Rebecca. How to brine a turkey. Cooks Illustrated. 1 November 2004. Accessed January 2020 at https://www.cooksillustrated.com/articles/36-how-to-brine-a-turkey

Some people feel that basting adds flavour. Cooks Illustrated suggests that you butter the turkey instead: “Brushing the turkey with butter before roasting is very little extra work, contributes to browning, and adds a mild buttery flavor.” [3]Hays, Rebecca. How to brine a turkey. 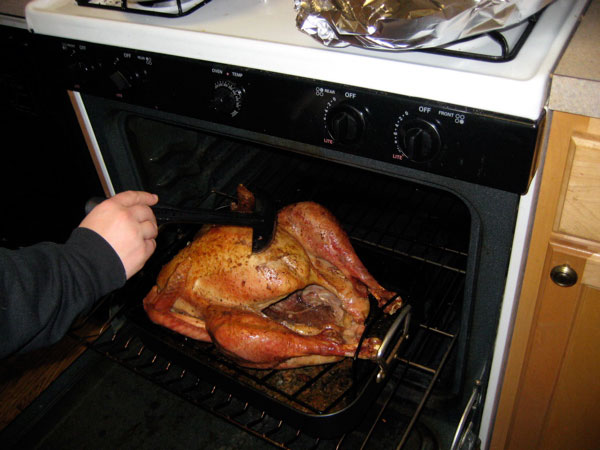 You can baste with a spoon, ladle, brush or a special device called a bulb baster, aka turkey baster.

For basting poultry being roasted, a turkey baster is the most efficient tool to use by far, and can be purchased inexpensively.

Basting is also done while barbequing and grilling. Basting brushes are best to use for this.

But whatever you do, don’t use the same brush that you used to put a sauce on raw meat that you do to baste meat in the process of being cooked. That will cause contamination of the cooked meat. You need to either get two brushes, or just smear the sauce onto the raw meat at the start with your hands, saving the clean brush for use during cooking. 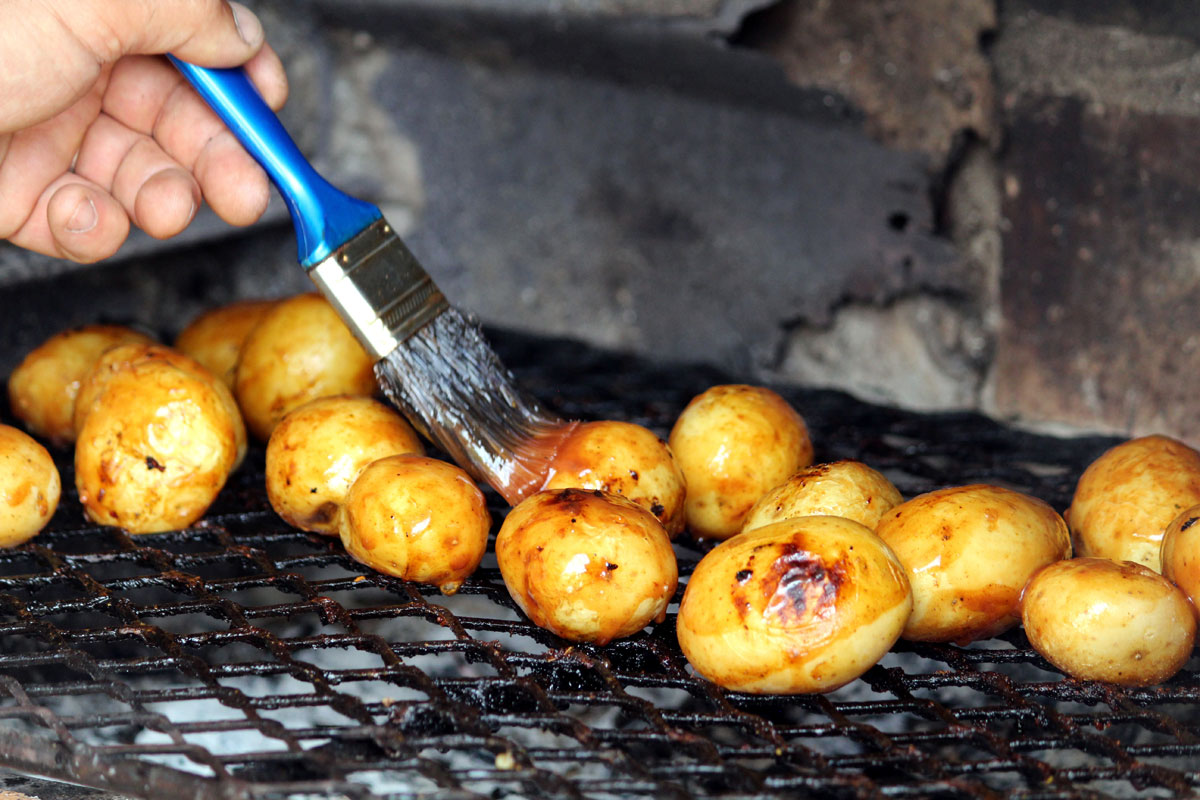 One way to make a joint of meat self-basting is to put it in the oven the correct way. When roasting a joint of meat, such as pork, beef or lamb, that has a layer of fat on one side, cook it fat side up so that as the fat renders it will drop down onto the meat and the meat will baste itself.

Laying bacon strips (streaky or American-style) on top of chicken or turkey doesn’t really work, because then the skin doesn’t brown under them.

Close the oven door while basting

When basting something that is cooking in the oven, take the roasting pan entirely out of the oven, and close the oven door to keep the heat in, do your basting, then replace in the oven. Keeping the oven door open greatly lengthens the cooking time because you are losing all the heat in the oven each time you baste. It’s also far safer to baste this way, as there is no oven door to trip over, and you are not bent over face-first into a pan of scalding hot grease.

Basting with drippings is a modern cooking technique

Historically, basting with drippings is a relatively new cooking habit, not an old one: people just didn’t have ovens in which they could put roasting pans, which let the juices accumulate to be used for basting. Instead, they would have cooked meat on a spit over a fire, or boiled it so as not to lose any goodness of the meat into the fire.

The modern day habit of basting with drippings may have come about because many people developed the habit, partly inspired by books such as the Joy of Cooking, of roasting with water in the pan, and covering the meat with tin foil or the top of the roasting pan to keep the moisture in. Cooked like this, the meat, especially fowl, wouldn’t brown properly. The chicken and turkey skin would look white. Basting it with hot fat would help to brown it.

This web site generates income from affiliated links and ads at no cost to you to fund continued research · Information on this site is Copyright © 2023· Feel free to cite correctly, but copying whole pages for your website is content theft and will be DCMA'd.
Tagged With: Roasting Meat