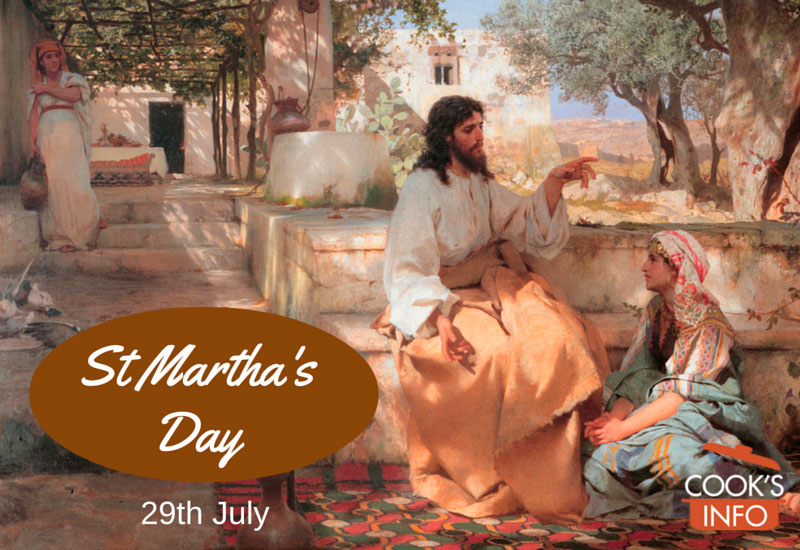 The 29th of July is the Feast Day of St Martha of Bethany, the patron saint of cooks.

Perhaps it’s not surprising that Irma Rombauer chose St Martha for the cover of the first edition of her “The Joy of Cooking”, which she paid for, printed and sold herself from her own house, as a 54-year old woman widowed a year earlier when her husband committed suicide. She got her daughter, Marion, to do the cover art, which is a drawing of St Martha, handbag in one hand, broom in another, and what looks like a dinner plate for a halo, slaying a dragon, which is presumed to be the dragon of kitchen chores. In other words, Irma chose for the cover of her first book someone who just gets on with it and gets things done.

And maybe that’s why Martha is good as the patron saint of cooks. Chefs may get all the glory, with their heads up in the clouds, and frilled this and expensive that — but it’s the cooks who put meals on the table 365 days a year.

Martha has also been tasked with looking after butlers, dietitians, innkeepers, and waitresses.

Legend has Martha, Mary and Lazarus travelling afterwards to the south of France in a boat — without oars or sails — where they spent the rest of their lives. They arrived there between 48 and 50 AD. Her tomb is in a local church in Tarascon, the Collégiale Royale Sainte Marthe. 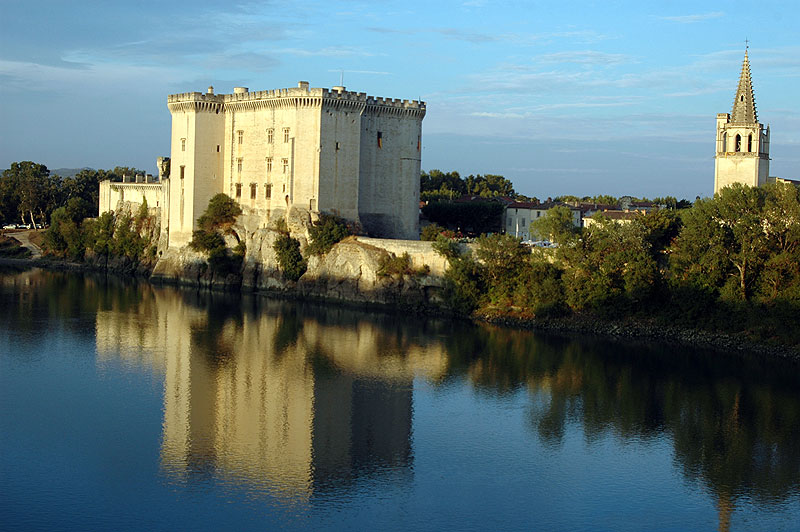 The Rhône river going through Tarascon. The church in the background is dedicated to St Martha and contains her tomb. The tomb is said to be on the exact spot where her house in Tarascon was. Gérard Marin / Wikimedia / 2005 / CC BY-SA 3.0

Having arrived at Tarascon, she reputedly saved the town by taming a dragon. The dragon lived in the river, and was terrorizing local fishermen. St Martha approached the dragon, which went tame in front of her, and let her put her sash on it and lead it into the town to show the people that it was a changed creature. The locals, though, still wanted vengeance for all the destruction it had caused, and killed the docile beast.

The Knights of the Tarasque (“Chevaliers de la Tarasque”) were founded in April 1474 by King René to hold regular festivities celebrating the legend. 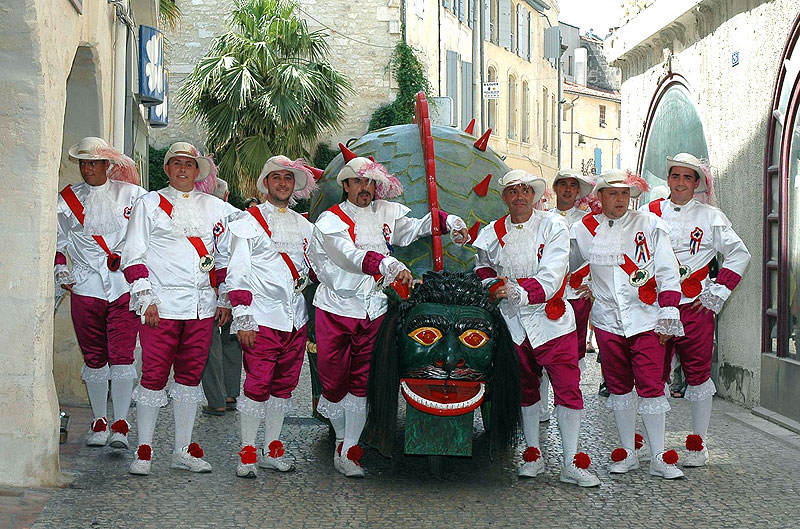 Numbering 12 to 18 people at any one time, their duties include welcoming strangers and to make merry for five days. They organize the “Fete de la Tarasque” which takes place on the last Sunday of June and in the week leading up to it. A parade on the Sunday through the centre of Tarascon attracts up to 10,000 people, with a “replica” of the monster led through the streets.

In previous centuries, the parade was accompanied by games, and provided an occasion for all the trades guilds to march and drum up good publicity for themselves.

The beast acquired its tall, rounded back over time to make it easier for people to get under it and carry it. Older images show it looking more like a crocodile.