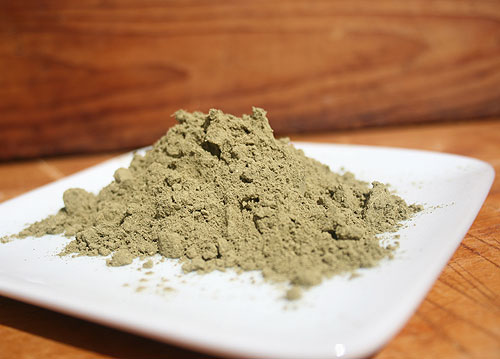 Stevia is a natural sweetener from a plant of the same name.

The plant is a member of the Aster family native to north-eastern Paraguay. It is a perennial shrub that grows 600 to 1200 cm (2 to 4 feet) tall. It has leaves with slightly serrated edges, and blooms with small white flowers.

It’s the leaves that are of interest. They have a very sweet taste. The older leaves are sweeter than younger ones, though the sweetness overall will decline somewhat after the plant flowers. When you chew on a leaf, it has a sweet taste at first, and then a bitter aftertaste. One of the compounds that causes the sweetness, Rebaudioside A, can be extracted to provide the sweetness without the aftertaste. It is reputed to be 200 to 300 times sweeter than sucrose by weight, without any calories. You only need very small quantities of it compared to sugar.

Stevia Powder is concentrated Stevia, with sweetening power up to 300 times that of sugar. The powder may be its natural green, or white. 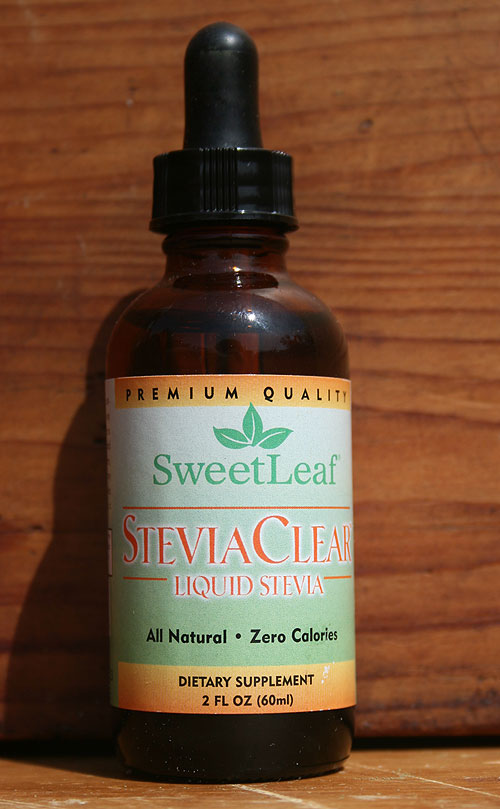 Liquid Stevia is water in which the active sweetener from Stevia has been extracted and concentrated. It is often clear, and often comes in bottles with an eye dropper to help you use it in the appropriate small quantities.

Blended Stevia Powder is Stevia blended with eryhritol or a starch such as inulin. The goal is to reduce the sweetness and bulk up the Stevia, so that Stevia can be used in the same quantities as sugar, making it easier to use in recipes — for example, 1 teaspoon of blended stevia powder is easier to measure than 1/8 teaspoon of stevia powder. One such product is Stevia One-to-One®.

Stevia is used commercially as a sweetener in Brazil, Japan, South Korea, Paraguay, Germany and Israel. In Japan, 40% of the commercial sweetening is done with Stevia (as of 2004.)

Stevia will not help baked products retain moisture, nor will it add flavour or colour, as other sweeteners will. You have to compensate for this with other ingredients. Moisture, for instance, can be provided by fat or applesauce. Some people recommend substituting up to 25% of the sugar called for with powdered milk as a way of providing body.

You cannot use it as a food for yeast to grown on in bread doughs, etc.

Pure Stevia is calorie-free and 0 PointsPlus® on Weight Watchers. Blended powders such as Stevia One-To-One can have essentially the same calories and PointsPlus® as white sugar. 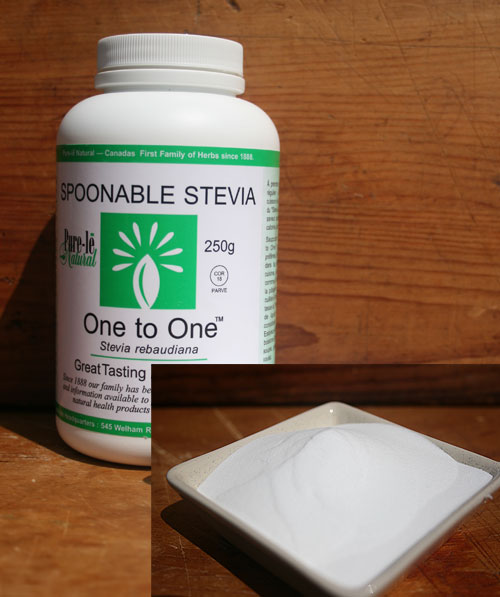 Stevia leaves have been used as a sweetener in Paraguay for hundreds of years.

Stevia was banned in the US by the Food and Drug Administration (FDA) in 1991. In 1994, it was allowed to be sold as a “dietary supplement”, but not as a sweetener, and no referral to it as “sweet” is allowed. In America, it can be bought in health food stores as dried leaves, powdered leaves, and as a liquid extract in bottles. Some extracts are a black syrup; others are clear. The clear extracts are made by steeping the leaves in distilled water or alcohol, just as vanilla is to make vanilla extract. In 2009, Stevia was approved as a food additive under the classification of “Generally Recognized as Safe (GRAS).” In 2013, Coca Cola began using it along with sugar in Coca Cola made in Argentina, marketing it as a “natural sweetener.”

Stevia was banned from being sold labelled as a sweetener in Canada until November 2012.

Conspiracy theorists believe the FDA actions are to protect the artificial sweetener manufacturers such as Monsanto.