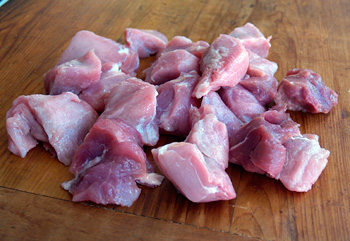 Stewing Pork is pork cut into serving-size chunks or cubes, meant for cooking with stewing or braising cooking methods. The meat is usually sold boneless.

It comes from areas of the pig that will stand up to the low, slow processes needed for stewing. The meat needs to have a good deal of collagen, connective tissue and / or fat in it so that it will stay moist during such long, slow cooking (contrary to popular belief, lean meat, even if stewed in a liquid, will come out bone dry and horrible — water does not equal moisture in meat.)

Consequently, it is generally cut from the Pork Blade or Shoulder area. In particular, meat from the picnic portion of the pork shoulder is a good candidate for stewing meat.

It is often cheaper to make your own pork stewing meat by buying a picnic or butt roast and cubing it up yourself, or if you don’t need that much, just chopping up a pork butt steak or two. If you do, remember that pork bones can be used to make a broth for dishes such as Ramen Noodles.

Cooks generally brown pork stewing meat first before further cooking to caramelize some sugars for flavour on the surface, but mostly to give its appearance some interest. (Note: browning does not seal in juices, contrary to popular urban myth.)

The stewing pork is then usually cooked in some kind of liquid.