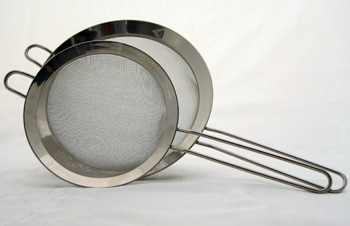 Contents hide
“Strain the mixture through a sieve…”

People often use the words strainer and sieve interchangeably. A whole lot of it even depends on what you are doing. The same person can use the same mesh strainer for straining lumps out of gravy with, and call it a “strainer”, and the next day use it to sift icing sugar or flour with, and call it a “sifter.” Many people refer to a colander as a strainer at times. Some use the word sieve to mean a flour sifter. Some recipes call for “sifted flour”; others word it as “sieved flour.”

When pressed to think about it, though, many people might say that a strainer has large holes and can be used for draining things such as boiled pasta or potatoes, or washed berries, while a sieve is usually made of a mesh with finer holes, and is used for dry things.

At any rate, the act of straining or sieving pretty can mean pretty much the same thing. Though perhaps while sieving is passing an item through very small holes so that larger, unwanted particles remain behind, straining is often designed to do the opposite: let unwanted material such as water pass through while keeping the desired material behind. But this is not always the case.

Straining is used almost exclusively for wet things, while sieving could be used for wet things like crushed berries, or for dry things, such as flour. The purpose of sieving can also be to create a smooth, uniform purée. For instance, a recipe might have you force cooked tomatoes through a sieve — both to remove the seeds and skins, and to purée it. A blender or food processor would purée it, but without removing the seeds. All the tough bits just get chopped into smaller tough bits.

Some strainers, particularly in restaurants or professional kitchens, are cone-shaped. These are called “chinois” or “china caps”, and come with varying degrees of fineness in their mesh. They are used for straining sauces, soups and stocks. The liquid is forced through with a spoon or a special “pestle” pushing device. If using one of these, don’t toss it in the sink after you are finished as other things tend to get tossed in along the way, too, and chinois dint and damage easily.

If the restaurant strainers are drum shaped, they are called “tamis.”

Certain models of food mills (or “moulins” in French) can also act as a strainer: you put food in, it purees it, and as the food passes out it passes through some mesh to strain it.

Recipes will sometimes specify a coarse sieve or a fine one. Cheesecloth or muslim can be used as a makeshift sieve or strainer, if your purpose is just to separate a solid from a liquid. Nylon strainers have a tighter weave than do stainless steel ones. 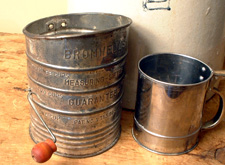 Sifting generally seems to involve something that will fall through a mesh of its own accord, such as flour, with just a bit of motion applied to get things moving. Straining could more imply that some “strain” was involved, such as forcing something through. That thinking might fall apart, if you thought that when you strain cooked pasta or boiled potatoes in a colander, no pressure is required to get the water to pass through — but then maybe that’s not really straining — maybe that’s just plain draining.

Many people still prefer the older crank-style flour sifters because they really direct where what you’re sifting will go, as opposed to having it waft over the sides of the bowl and onto the counter.

A “setaccio” in Italian is a sieve.