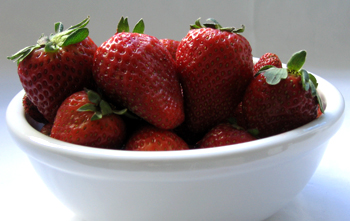 Strawberries are different from most other kinds of fruit, in that they bear their seeds on the outside. In fact, an average-sized strawberry will have around 200 seeds on it.

It seems that every parish in the temperate world (strawberries don’t grow well in very hot climates) claims that its strawberries are the best. While Wimbledon goers are proclaiming the glories of the English strawberry, people in France, Belgium, Oregon and Ontario are doing the same about theirs. It is California, though, that provides 80% of the strawberries commercially grown in North America.

Strawberries grow best when provided with a good mulch. It keeps moisture in, funguses down, and helps insulate their roots in the winter.

When you buy strawberries out of season, especially in winter, you are more likely to think “should you”, rather than “how.” The “how” part is easy: different varieties of strawberries in have now been bred to produce fruit at different times of the year in warmer climes or in greenhouses. The “should you” part is a rather trickier matter between you, your wallet, your tastes and your views on eating local and in-season.

Winter strawberries don’t seem to have the taste of local strawberries in the summer. These winter varieties, destined for widespread markets rather than just local consumption, have been bred to be more durable for shipping, to have a longer shelf life, and for some reason, they tend to have about half the sugar content of summer strawberries, which is why they aren’t as sweet. They can still be nice, but these are the wrong strawberries to dip in chocolate or to just serve simply with cream: save that for the summer ones. See under cooking tips below for some ways to wake up the flavour of off-season strawberries.

When buying winter strawberries, you may not be able to whiff much fragrance, but do the best you can. 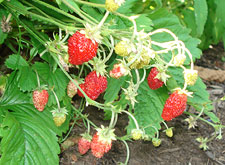 The thing to remember about strawberries is that, even they are so full of water and so juicy, water applied to them after picking speeds up their deterioration. Bearing that in mind, to get a day or two more out of the strawberries in your fridge, don’t wash them until you are going to use them. Then, when you do wash them, don’t hull them (remove the stems) until they are dry, as washing them when they are hulled lets more water in. To dry them, you can spread them out on paper towel and pat dry, or let drain in a colander. Two things never to do: don’t slice up more than you need, as once cut they will be moosh the next day in the fridge. And, never let them soak in a sink of water; they will just get waterlogged.

Let strawberries come to room temperature before serving to bring out more of the sweet taste. If you are sugaring them before serving them, don’t sugar more than half an hour in advance as the sugar will soften them otherwise.

There are more surprising ways — to our thinking, perhaps even bizarre at first blush — to serve strawberries, and it is ways such as these that can both bring out the taste in winter strawberries, with the way they are being served adding to the novelty. A drizzle of a good quality balsamic vinegar acts to highlight their sweetness; even more so if you slice the strawberries into a bowl, sprinkle with a fine-grained, unrefined sugar such as golden caster sugar and with balsamic vinegar, toss and let “marinate” for half an hour, then toss again and serve. Or, consider some of the ways that Mexican cooking uses strawberries in dishes that are slightly savoury, such as a sauce of mashed strawberries with crushed garlic and finely chopped jalapenos. Freshly ground black pepper on strawberries also really draws out their taste.

If you are making jam from strawberries, prefer the underripe ones to the ripe ones, especially the ones still with white at the stem end. The underripe ones will have more pectin in them and will make better jams. The white bits at the ends are where pectin is concentrated, so don’t trim those away.

Unwashed berries will keep better than washed ones in your fridge. Prefer a larger, shallow container rather than a deep one such as a bowl: stacked any more than two high, the berries at the bottom start to bruise and get squished. Don’t cut up or hull before storing them, or they spoil very fast. Store covered, anywhere for up to 5 days.

To freeze, wash, dry and hull them, then arrange them on a flat thing such as a plate or a cookie sheet. Place in freezer till frozen hard, then pop into a freezer bag or into freezer containers and freeze for up to 9 months. When thawed, you can use them for cooking, for puréeing or for mashing.

Strawberries have grown wild for centuries in both America and Europe. Strawberries grew wild in Italy as long ago as 234 BC. Romans picked them wild and ate them, but there is no solid proof that they cultivated them.

After the Romans, Strawberries were eaten, but more casually, and weren’t as prized. They fortune really took a downturn in the 1100s when Saint Hildegard decided they were unfit to eat, and made her views known. 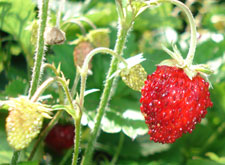 Nevertheless, by 1560 French visitors noticed that English ladies were planting Strawberries in their own gardens, and serving them with cream.

In the mid 1700s, a Swedish botanist (Charles Linnaeus) decided to put the curse of Saint Hildegard on Strawberries to rest once and for all, and ate only Strawberries for a few days to show that they weren’t poisonous.

By the early 1800s, they were being grown in many English and American home gardens, and began in appear in local markets — but because of their perishable nature, weren’t shipped far. It was the ingenious Americans who, in 1843, came up with a way to ship Strawberries by railroad by spreading ice on top of the Strawberry boxes.

In the early 1800s, Keens Seedling (released 1818) and British Queen (released 1834) were important varieties in England.

Strawberry Shortcake, an American classic, may have been inspired by how the Indians used Strawberries, in a baked bread made of cornmeal and Strawberries. 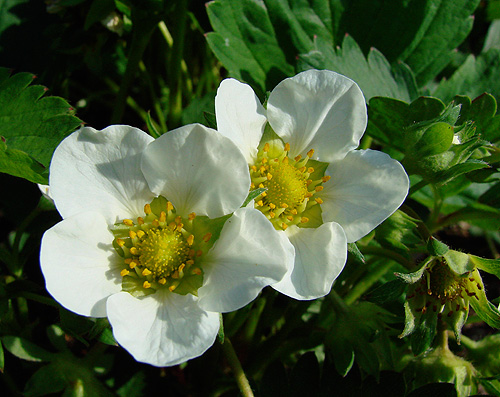 The straw in the word Strawberry is not related to the relatively modern tradition of placing straw under them. They were known as “Straberies” in English as early as 1265. Instead, it comes from “straw” being a variant of the verb “to strew”, as in our modern word, “strewn”, describing the tangle of Strawberry vines on the ground.

“Doubtless God could have made a better berry, but doubtless God never did.” — William Butler.

Share a double Strawberry with the object of your affection, and legend has it you will fall in love. (This can’t be a very old legend, because up until the discovery of the New World, the Strawberries were more like the size of raspberries and offering half of one to someone couldn’t have left them overly impressed.)