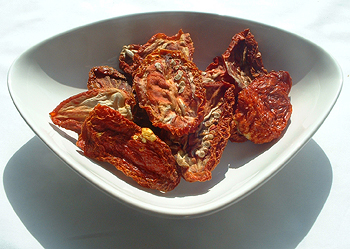 Sun-Dried Tomatoes are slices of tomatoes, seeds and all, that have been dried by setting them out in the sun.

They end up with a concentrated, intense tomato flavour. They are chewy, even when rehydrated. Some people like eating them as a snack.

On average, ten normal tomatoes are needed to make about 1 oz (30g) of sun-dried tomatoes. The most usual variety used for drying commercially is one called “Principe Borghese.”

Some people try making their own by low and slow baking in the oven for several hours, but this can be impractical, let alone non-environmental, when you cost out how much fuel you are using, versus the cost of just buying them.

Sun-Dried Tomatoes can’t really be dried outside in climate that is humid in addition to being hot. They’ll just rot, unless you bring them in at night to keep the dew off them, and move them around to keep them in sun during the day at all times.

Sun-Dried Tomatoes are shipped packed dry in bags, or in oil in bottles.

Oftentimes recipes will ask you to let the dry ones stand in boiled water for 5 minutes (or warm water for 30 minutes) to soften them before using. Drain (you can freeze the flavoured water for other uses.) Pat dry between two sheets of paper towelling. You can also rehydrate them by letting them stand in olive oil for 24 hours.

The ones in oil you use as they are. You can use the oil from the jar for other purposes such as stir-fries, frying, etc.

Store rehydrated ones in the fridge and use within a few days; or in two weeks, if you put cover them with olive oil.

Once the jarred ones are open, store any left in the jar in the fridge and make sure they remain covered in olive oil. Use within a few weeks.

This web site generates income from affiliated links and ads at no cost to you to fund continued research · Information on this site is Copyright © 2022· Feel free to cite correctly, but copying whole pages for your website is content theft and will be DCMA'd.
Tagged With: Tomatoes