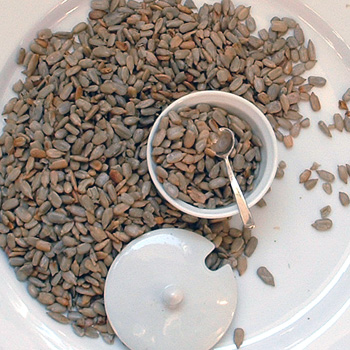 Sunflower Seeds come from the large centres of the huge flowers called Sunflowers. Less than 25% of sunflower seeds harvested commercially are sold for use as seeds per se; these are the larger, stripe-shelled seeds. The majority of the seeds, which are small and black, are pressed for oil.

Seeds for eating can be in-shell or kernels.

For eating in-shell, they are roasted and seasoned.

Sold as kernels, they are shelled and sold either raw for cooking or roasted as a snack food.

Like all seeds, Sunflower Seeds will go rancid quickly owing to the high unsaturated fat content. Store in refrigerator up to 4 months, or freeze the kernels for up to a year. 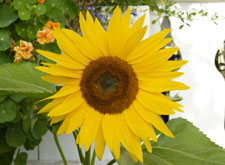 Sunflowers are native to the South-western United States.

The Spanish explorers brought them back to Europe, where over the next few centuries, it was Russian farmers who took a particular interest in them, and as Russians immigrated to America in the late 1800s, they re-introduced both their strains of the seeds and the interest in them.

This web site generates income from affiliated links and ads at no cost to you to fund continued research · Information on this site is Copyright © 2021· Feel free to cite correctly, but copying whole pages for your website is content theft and will be DCMA'd.
Tagged With: Russian Food