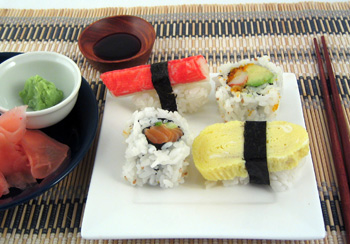 The “su” in the name is the Japanese name for “vinegar.”

It is either rolled up in seaweed or in very thin slices of fish, usually with a filling called “gu” in the middle, or formed into cakes, and garnished on top with something called “tane” or “dane.”

Sushi actually refers to the seasoned rice; the pieces of fish are “sashimi.” The sushi rice is “sushi meshi.” The fish is usually, but not always, raw.

A sushi chef is called a “shokunin.”

In Japan, sushi is not normally made in homes. It is something you go out for.

Only ocean fish is ever used raw for sushi; freshwater fish is always cooked.

There are different ways of classifying sushi.

One way is by geography. In this scheme, there are two main styles of Sushi, Tokyo and Osaka.

Another way is by preparation method. In this scheme, there are three main styles of Sushi: Nara-zushi (fermented), Nama-Nari-zushi (lightly fermented, also called Nama-Nare-zushi) and Haya-zushi (not fermented, uses rice vinegar instead.) Haya-zushi is the “modern” method used since about the 1600s.

Traditional Sushi restaurants in Japan have almost no female chefs (there was a mistaken belief that women had warmer hands and would ruin the fish), and even used to discourage women on their own from eating in them.

In traditional Sushi restaurants, you should never ask the chef for a spoon, a menu, or pay him directly.

For the first two to three years of his apprenticeship, a chef would only be allowed to handle the rice, and not the fish.

The pink, pickled ginger slices (“gari”) you are served are meant to be eaten between different types of sushi, to act as a palate cleanser.

Sushi chefs consider it gauche when customers mix wasabi with soy sauce to make a dipping sauce, as Americans do.

To have Sushi restaurants, you need to either be near the sea, or have refrigerated systems of transportation that can economically move fresh fish to where you are.

From the 1850s onwards, restaurants in the Little Tokyo area of Los Angeles were serving Sushi to Japanese customers there. It didn’t break outside the ethnic “ghetto”, though, until the 1970s, when a restaurant called “Osho” opened near Beverly Hills, next to Twentieth Century Fox’s studios, and served Sushi. Sushi was immediately popular with the Hollywood set working next-door: it was expensive (therefore desirable), high-protein and low-fat.

Tuna really only became popular in Sushi from the 1960s onwards; before that, most Japanese saw it as an inferior fish for Sushi.

Sushi in Japan today doesn’t bear much resemblance to its origins a few thousand years ago along the Mekong river in southeast Asia. It started as a way of preserving cleaned, raw, salted fish between layers of rice in jars, weighted down with a heavy stone. The rice would ferment into alcohols and acids that would preserve the fish one to three years. The rice was just regarded as a preservative; it was thrown away when the fish was eaten. This type of Sushi is called “Nare-zushi”; it is still served in served in Thailand, Taiwan and the Kyoto region of Japan.

By the 1400 and 1500s, the transportation system in Japan had improved, with better, safer roads inland. Fish could be delivered more regularly; it didn’t have to be preserved as long. The preserving time could be reduced to a month, and then later a few days; because of this, both the fish and the rice could be eaten, with both having a slightly sour taste. This type of Sushi was called Nama-Nari-zushi, Nama-Nare-zushi, Nama-Nare or Han-Nare.

Some attribute today’s Sushi style, Haya-zushi, to a doctor named Matsumoto Yoshichi in the mid 1600s. By this point in time, transportation lines were such that fish could be consumed fresh, but people missed the taste of the soured rice. Yoshichi hit upon the idea of imitating the taste of the soured rice without the fermentation periods by adding a small amount of rice vinegar to the rice.

By the 1800s, this was the dominant style of sushi. The rice would be flavoured with rice vinegar, sugar and salt. In 1824, a food stall vendor named Hanaya Yohei started serving raw, sliced, fresh fish on small cakes of the vinegar-flavoured rice. His stall was in the Ryogoku district of Tokyo. Others copied him, and sushi quickly became popular as a fast street food sold from small food booths (you’d sit at the booths to eat, though: many Japanese today still regard eating and walking as gauche.)

“In Mexico we have a word for sushi — bait.” — Jose Simon

Sushi is pronounced “sushi” in Japanese. But when it’s tacked onto the end of a preceding word, the “s” changes to “z” to make the pronunciation (in Japanese) easier.