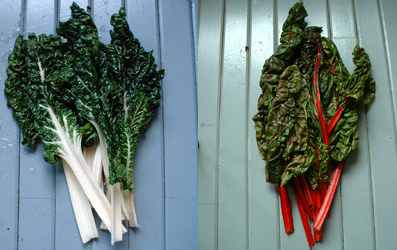 Swiss Chard, though a member of the beet family, doesn’t develop the large root that beets do. Instead, chard is grown for its leaves and thick, edible stalks, which are treated as greens or pot herbs and cooked.

Almost all varieties of Swiss Chard have savoyed (wrinkly) large dark-green leaves. Most have either red stalks or white stalks, but one variety, Lucullus, grows with pale green stems. Other varieties have yellow and purplish stems.

Most chard varieties will start growing in gardens while the weather is still cool, and keep on growing, even after the first few chills of the fall.

Chard can be used as a “cut and come again” vegetable. You harvest the outer leaves, and leave the inner ones, which will keep on growing. 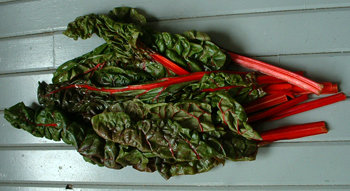 It has a stronger flavour than white Swiss chard. 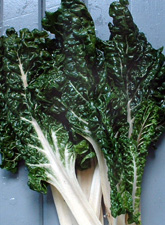 White chard is Swiss chard that has white stalks instead of red stalks. The leaves are still generally green and savoyed.

It has a milder taste than red chard, and is a bit more toothsome. It is sometimes called “Sweet White Chard” owing to the milder taste — reflecting that it is often considered the best tasting of any coloured stem varieties of chard.

Wash; no need to spin or pat dry. Snip off and discard any leaf portions or stalks that have gone brown.

The stalks, boiled, steamed or microwaved on their own, can be treated like asparagus and served in a butter and lemon sauce. Or you can bake the already-cooked stalks in a cheese sauce with a breadcrumb topping. Cut stalks into 5 to 7.5 cm (2 to 3 inch ) pieces.

You can also just chop the leaves and the stalks together and cook them together. Toss in butter or olive olive, optionally with some lemon or fresh herbs, to serve.

In a pressure cooker, cook combined leaves and stalks for 2 minutes on high.

The “chard” part of the name came about because it was thought to be a variety of cardoon, which the French name for is “chardon.” It was actually a beet whose root had just shrivelled, but the name stuck.

Beets originally grew with almost no roots to speak of: the large-shaped beet root that we are now familiar with seems to have come about in the 1500s.

Don, Monty. Eat with the beet: A relative of beetroot and spinach, Swiss chard looks and cooks better than both. Manchester: The Observer; 9 February 2003.