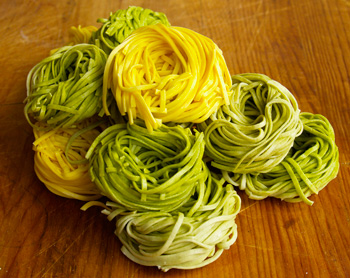 Tagliolini is a pasta that is somewhat thicker than spaghetti, cut into long strips about ⅛ inch (3 mm) wide.

Traditional in the Liguria region of Italy, it is usually made as a fresh pasta with egg in the dough.

Tagliolini is very similar to tagliatelle, which is also made in long strands, except that the strands of Tagliolini are sometimes cylindrical, rather than flat, as tagliatelle’s are.

The sauces used with Tagliolini are usually smooth, creamy and relatively thin.

To make it, the romano cheese is finely grated, then mixed in a bowl with the pepper and a ladleful of the cooking water from the pasta to make a sauce. This sauce is then stirred into the drained, cooked Tagliolini, which is then garnished with some more grated pecorino, then served.

The pecorino must be freshly grated for the rapid melting to happen.

The world “Tagliolini” (meaning “small cut ones”) comes from the Italian verb, “tagliare”, which means “to cut.”

This web site generates income from affiliated links and ads at no cost to you to fund continued research · Information on this site is Copyright © 2022· Feel free to cite correctly, but copying whole pages for your website is content theft and will be DCMA'd.
Tagged With: Ligurian Food