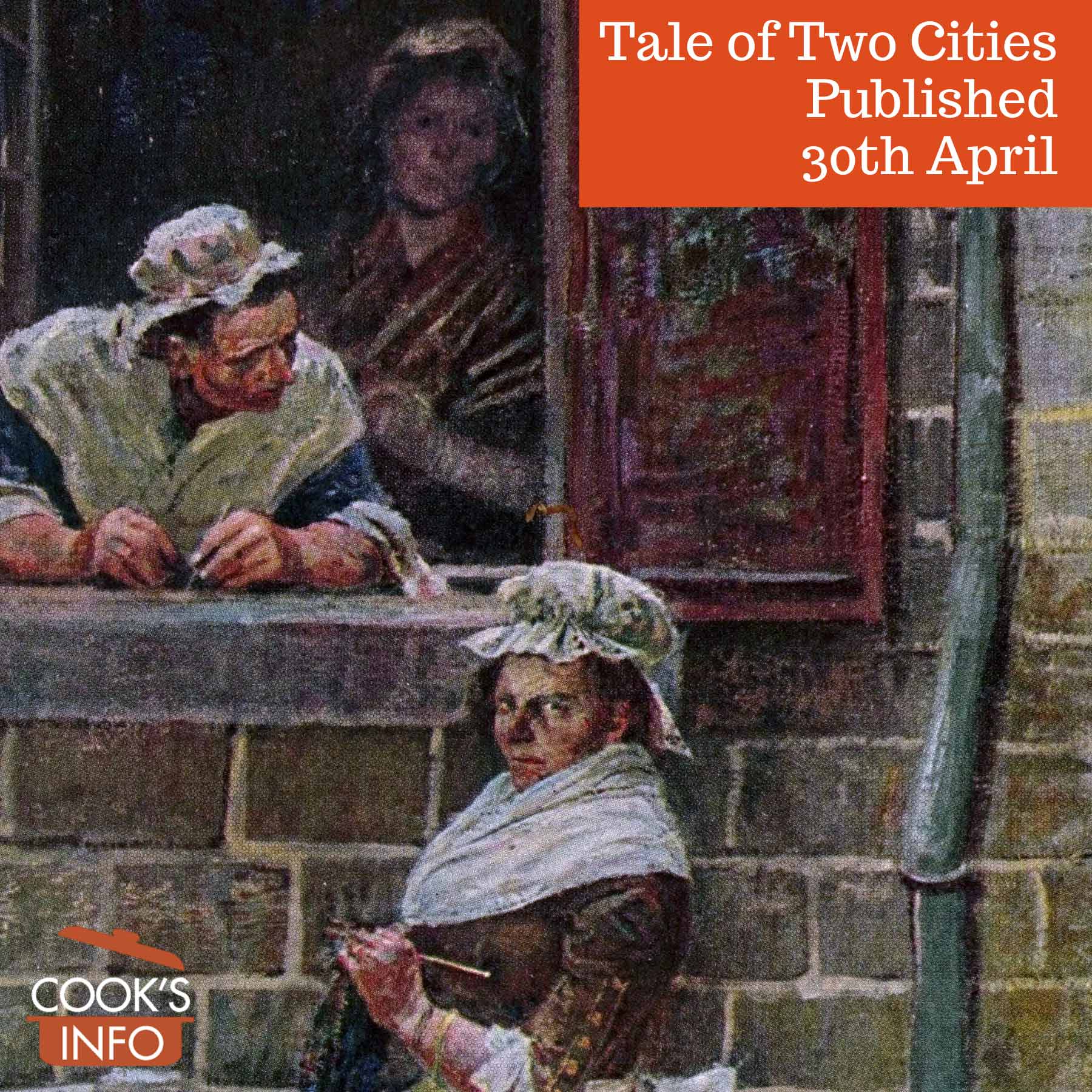 On the 30th of April 1859, Charles Dickens published the Tale of Two Cities.

The very first mention in English literature of “chips”, as in “fish and chips“, was in Tale of Two Cities:

“…husky chips of potato, fried with some reluctant drops of oil.” — The Tale of Two Cities, Book 1, Chapter 5.

Still, the book is more notable for its examination of the diets of the poor.

Hunger and Poor Diets in the Tale of Two Cities

While most Victorian cookbooks focussed on feasting and how the middle-class could help their kitchen staff prepare better meals, the works of Dickens also captured what the world was like for the vast majority of people who were not in the middle or upper classes. This is no surprise, as Dickens was a champion of the poor.

The Tale of Two Cities shines the light on people experiencing the lack of food — hunger.

Frequency of mentions of some foodstuffs

The foods mentioned and not mentioned in the Tale of Two Cities tell their own tale of what foodstuffs were available to the common people.

Meat is barely mentioned. There are 0 occurrences of the words bacon, beef, ham, lamb, chicken, or goat. There is 1 mention of goose, 2 mentions of mutton, and just 5 of meat in general. On those few occasions when meat is mentioned, it is in phrases such as “only the leanest scrags of meat”, “scanty and insufficient suppers those, and innocent of meat” and “when we chanced to have a bit of meat, we ate it in fear, with the door barred and the shutters closed, that his people should not see it and take it from us.”

There are 64 mentions of wine, but only 1 of milk — milk would have been prohibitively expensive for the urban poor, as it spoiled so quickly.

Wine would keep longer, but the wine the poor had access to would have been very poor indeed. Book 1, Chapter 5 of Tale of Two Cities opens with a cask of fine, expensive wine such as drunk by aristocrats being broken outside Monsieur Defarge’s wine shop in Paris. The people are so poor that they lap this expensive wine off the cobbles, even though it mingles with dust and becomes mud.

In the background of the history of Paris, always present has been officialdom’s fear of food riots over the lack of food, or the price of it.

Still, there were the aristocrats who were simply dismissive about the hunger of the poor. Historically, Joseph-François Foulon, the French Intendant of Finances, was reputed to have said during an earlier period of famine that if the people were hungry, they should eat grass. During the French revolution, he was captured by a mob and hung from a lamp-post in Paris on 22 July 1789. [1] Carlyle in The French Revolution: A History (Chapter 1.5.IX entitled “La Lanterne”).

Dickens brings Foulon as a character into the novel, and has the mob feed him with grass by stuffing his mouth with it as they hang him.

A Tale of Two Cities (free on Project Gutenberg) https://www.gutenberg.org/files/98/98-h/98-h.htm

This is an assembled body of text (a “corpora”) made from 15 novels by Charles Dickens. Try searching it for food terms. In the right hand column, enter a term where it says “Search for terms” and press enter. Dickens novels corpora. 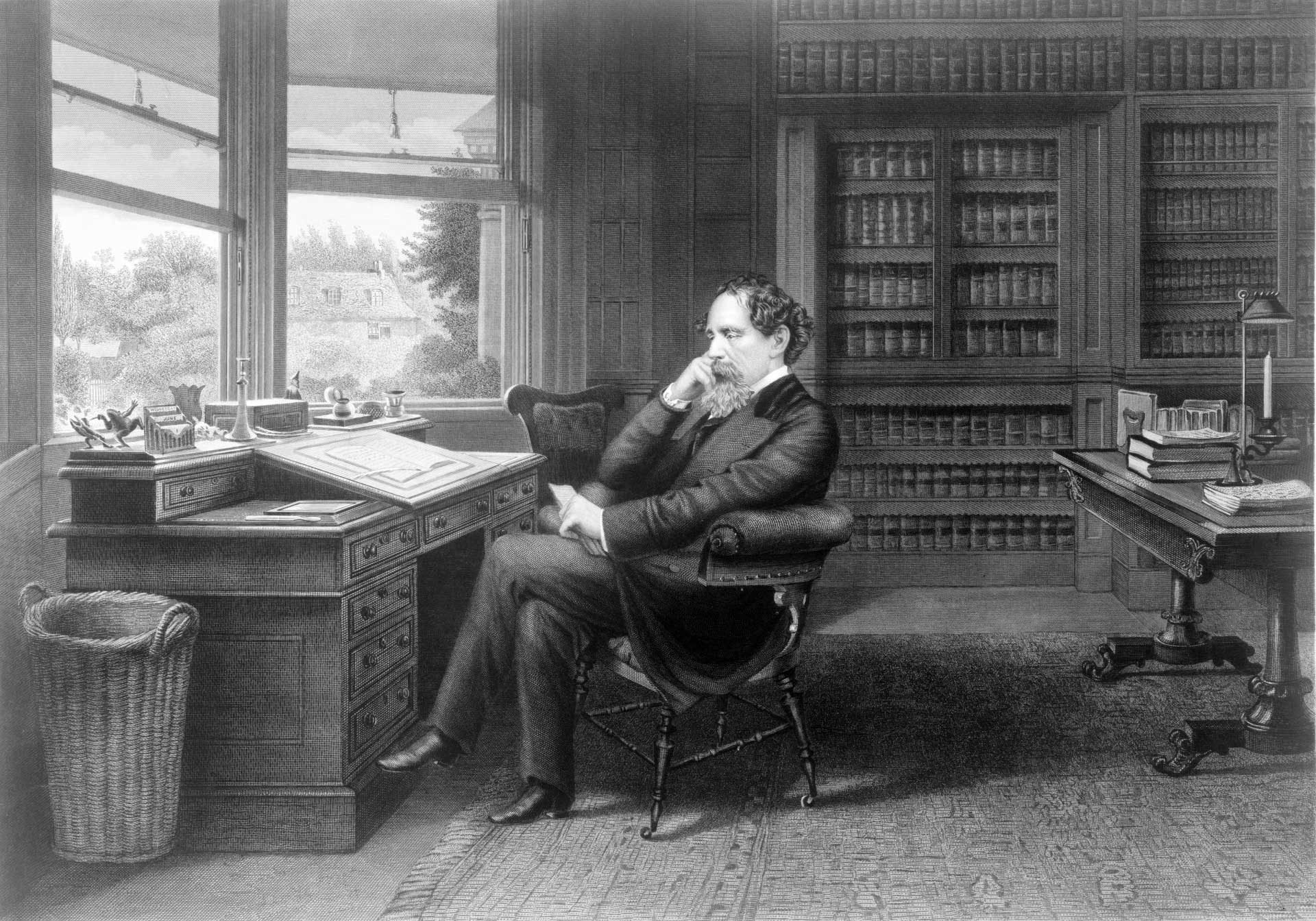 Food-related excerpts from the Tale of Two Cities

“Hunger. It was prevalent everywhere. Hunger was pushed out of the tall houses, in the wretched clothing that hung upon poles and lines; Hunger was patched into them with straw and rag and wood and paper; Hunger was repeated in every fragment of the small modicum of firewood that the man sawed off; Hunger stared down from the smokeless chimneys, and started up from the filthy street that had no offal, among its refuse, of anything to eat. Hunger was the inscription on the baker’s shelves, written in every small loaf of his scanty stock of bad bread; at the sausage-shop, in every dead-dog preparation that was offered for sale. Hunger rattled its dry bones among the roasting chestnuts in the turned cylinder; Hunger was shred into atomics in every farthing porringer of husky chips of potato, fried with some reluctant drops of oil.” — The Tale of Two Cities, Book 1, Chapter 5.

“A large cask of wine had been dropped and broken, in the street. The accident had happened in getting it out of a cart; the cask had tumbled out with a run, the hoops had burst, and it lay on the stones just outside the door of the wine-shop, shattered like a walnut-shell. All the people within reach had suspended their business, or their idleness, to run to the spot and drink the wine. The rough, irregular stones of the street, pointing every way, and designed, one might have thought, expressly to lame all living creatures that approached them, had dammed it into little pools; these were surrounded, each by its own jostling group or crowd, according to its size. Some men kneeled down, made scoops of their two hands joined, and sipped, or tried to help women, who bent over their shoulders, to sip, before the wine had all run out between their fingers. Others, men and women, dipped in the puddles with little mugs of mutilated earthenware, or even with handkerchiefs from women’s heads, which were squeezed dry into infants’ mouths; others made small mud- embankments, to stem the wine as it ran; others, directed by lookers-on up at high windows, darted here and there, to cut off little streams of wine that started away in new directions; others devoted themselves to the sodden and lee-dyed pieces of the cask, licking, and even champing the moister wine-rotted fragments with eager relish. There was no drainage to carry off the wine, and not only did it all get taken up, but so much mud got taken up along with it, that there might have been a scavenger in the street, if anybody acquainted with it could have believed in such a miraculous presence.” — The Tale of Two Cities, Book 1, Chapter 5.

“Down, and up, and head foremost on the steps of the building; now, on his knees; now, on his feet; now, on his back; dragged, and struck at, and stifled by the bunches of grass and straw that were thrust into his face by hundreds of hands; torn, bruised, panting, bleeding, yet always entreating and beseeching for mercy; now full of vehement agony of action, with a small clear space about him as the people drew one another back that they might see; now, a log of dead wood drawn through a forest of legs; he was hauled to the nearest street corner where one of the fatal lamps swung, and there Madame Defarge let him go — as a cat might have done to a mouse — and silently and composedly looked at him while they made ready, and while he besought her: the women passionately screeching at him all the time, and the men sternly calling out to have him killed with grass in his mouth. Once, he went aloft, and the rope broke, and they caught him shrieking; twice, he went aloft, and the rope broke, and they caught him shrieking; then, the rope was merciful, and held him, and his head was soon upon a pike, with grass enough in the mouth for all Saint Antoine to dance at the sight of.” — The Tale of Two Cities, Book 2, Chapter Chapter XXII.[/ref]

Jankowski, Nicole. It Was The Best Of Fries, It Was The Worst Of Fries: Charles Dickens, Food Scribe. National Public Radio. 7 February 2017. Accessed May 2021 at https://www.npr.org/sections/thesalt/2017/02/07/513727224/it-was-the-best-of-fries-it-was-the-worst-of-fries-charles-dickens-food-scribe

This web site generates income from affiliated links and ads at no cost to you to fund continued research · Information on this site is Copyright © 2021· Feel free to cite correctly, but copying whole pages for your website is content theft and will be DCMA'd.
Tagged With: English Food