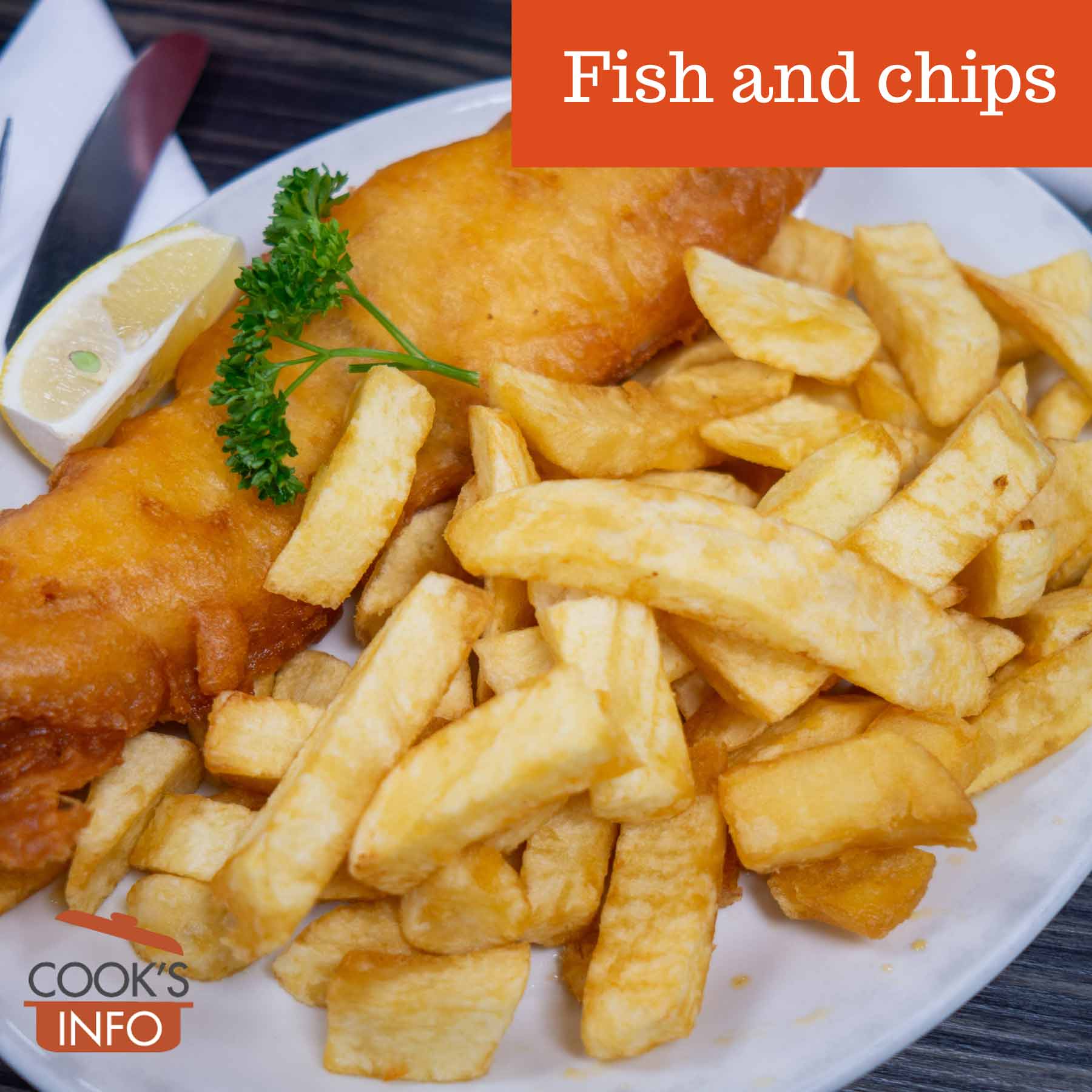 Fish and chips is an English dish of deep-fried battered fish, served with pieces of deep-fried potato. The dish needs to be served piping hot.

Many people swear that it is impossible to cook real fish and chips at home: “Fish and chip shops use special equipment and cook at temperatures that it is difficult to match in a kitchen at home.” [1]British Council. Cooking fish and chips. In: Exploring English Food and Culture. Step 3.15. July 2021. https://www.futurelearn.com/courses/exploring-english-food-and-culture/1/steps/1177962

In the U.K, the industry is promoted and protected by the National Federation of Fish Friers (est. 1913):

The fish and chip shop

Traditionally, fish and chips has been a takeaway meal, as opposed to delivery service or a sit-down restaurant meal, but there are several fish and chip chain restaurants now. For takeaway, the fish and chips are placed on a piece of white grease-proof paper, then wrapped in newspaper to keep them warm. Now, clam shell cases or cardboard boxes are common.

The shops selling fish and chips are often referred to as “chippies”, or “the local chippy.” A typical chippy will also offer other things, such as sausages or meat pies.

Friday was always a busy day at chippies, because Friday was traditionally a meatless day, a hangover from the old church calendar. It also provided parents an easy way to put a treat meal on the table at the end of a work week.

The deep-fried potato pieces are what the English call chips. They are thick-cut French fries, and typically cooked somewhat soft, as opposed to crispy. Putting some in between two buttered pieces of soft white bread to make a “chip butty” is popular.

From the 1960s to the 2000s, the Maris Piper was a favourite potato used at chippies.

In the United States, fish and chips is likely to be fish and French fries.

Common fish used include cod and haddock. Others are plaice, pollock, skate, etc. But it’s always a white fish.

EU directive 2065/2001/EC stipulated that in selling “fish and chips”, the species of fish being sold to the consumer had to be mentioned as well — e.g. “cod and chips”. It’s uncertain if that consumer protection will continue after the U.K. exits from the EU. Most fish and chip shops though will offer varying prices for the fish and chips, depending on the fish selected by the customer. 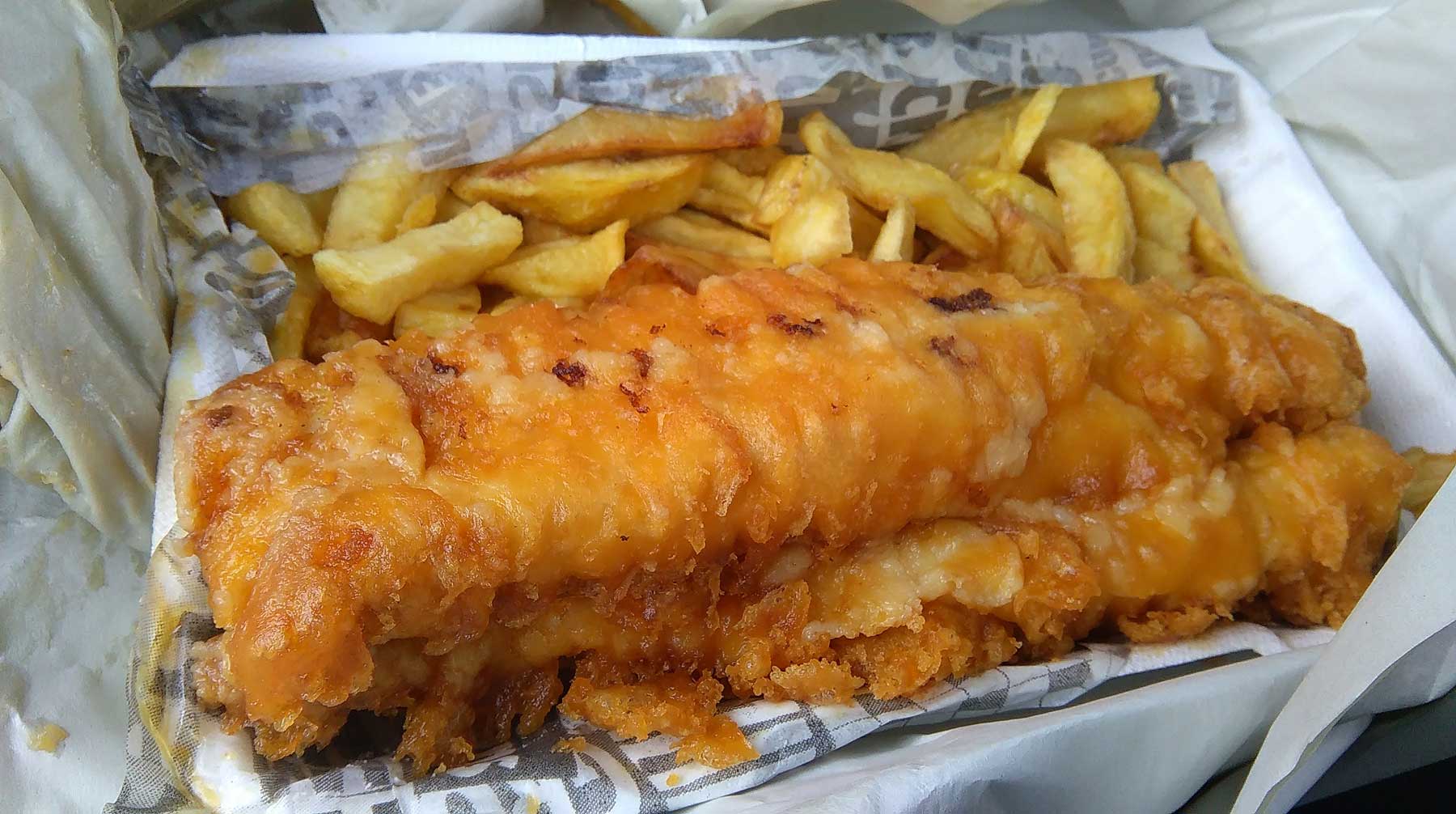 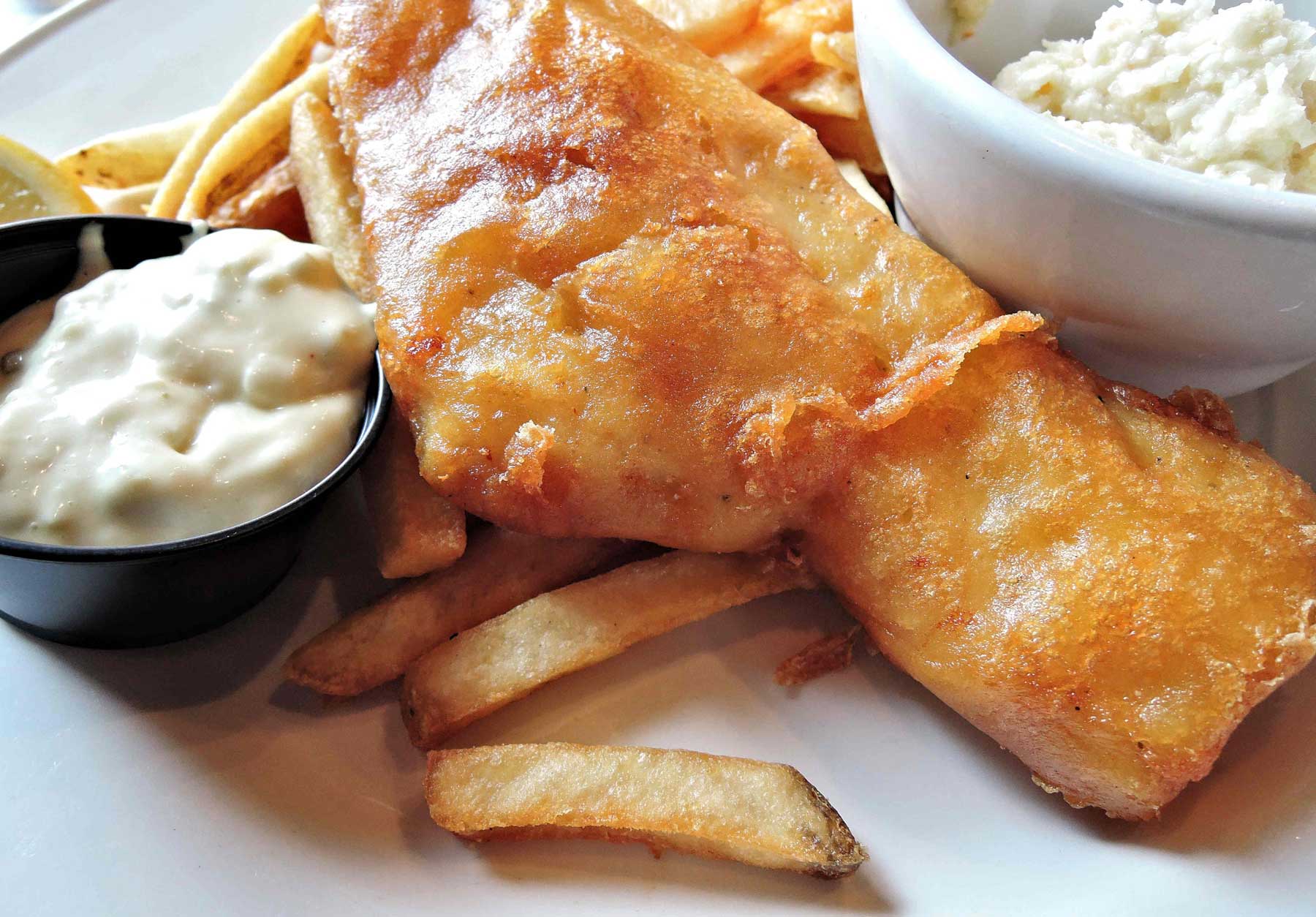 There are some regional preferences. In West Yorkshire, for instance, “jumbo haddock” fried in beef dripping was and remains popular. Jewish fish and chip shops, such as Cantor’s in Leeds, were amongst the first to fry in oil instead.

Fish and chip shops in Australia will often bread crumb the fish instead of battering it, to the horror of travellers from abroad.

In Dublin, Ireland, you ask for “one and one”, meaning 1 fish, 1 order of chips.

“In Ireland, legend has it the first fish and chips were sold by an Italian immigrant, Giuseppe Cervi, who mistakenly stepped off an America-bound ship at Cobh (then called Queenstown) in County Cork and walked all the way to Dublin. He started by selling fish and chips outside Dublin pubs from a handcart. He then found a permanent spot in Great Brunswick Street (now Pearse Street). His wife Palma would ask customers “Uno di questa, uno di quella?” This phrase (meaning “one of this, one of the other”) entered the vernacular in Dublin as “one and one”, which is still a way of referring to fish and chips in the city.” [3]National Federation of Fish Friers. Everything you need to know about fish and chips. Accessed July 2021 at https://www.nfff.co.uk/pages/fish-and-chips

Malt vinegar and salt are the traditional condiments that will be offered free to go with it.

Ketchup is a less popular option.

Mushy peas are typically a paid add-on side dish in the U.K..

Some people now also like mayonnaise on the side. 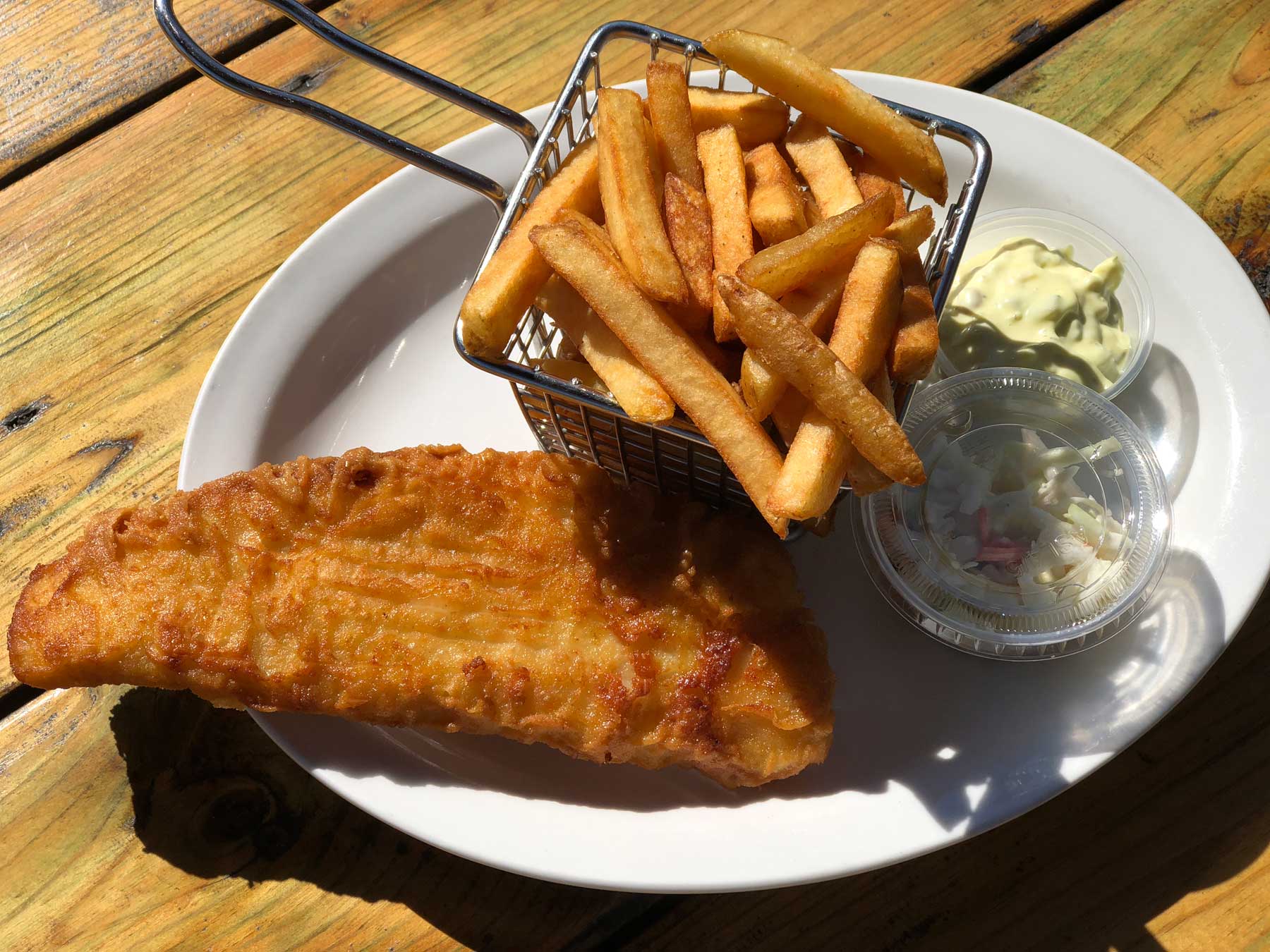 Some fish and chip numbers

As of 2021, fish and chips are still the most popular takeaway food in England. “There are now around 10,500 fish and chip shops in the UK, compared to only 1,300 MacDonalds.” [4]British Council. Fish and chips: Britain’s classic takeaway. In: Exploring English Food and Culture. Step 3.14. July 2021. https://www.futurelearn.com/courses/exploring-english-food-and-culture/1/steps/1180015

Since the late 1900s, the fish and chip trade has been hit by a perception of being unhealthy food, and by the rising cost of fish. Still, many people feel that a fish and chip meal still represents good meal value for your money, in terms of being filling, and in terms of providing a good portion of fish which is still seen as healthy in and of itself (batter and frying aside.)

Ironically, one of the factors that may have made fish and chips less healthy is vegetarianism. Traditionally, beef suet was the fat they were fried in. Vegetarians demanded a change to vegetable oil, which can’t be heated to temperatures as high as beef suet. This means that the items fried in it take longer, therefore absorbing more fat. And, some vegetable oils when overheated, or re-used too often, can release carcinogenic free radicals.

Some credit the ultimate origins of fish and chips to a melding of cooking traditions brought to England by refugees: frying fish in batter, brought over by Jews fleeing from Spain and Portugal, and frying chipped potatoes in fat, brought over by Huguenot refugees from France. Both items, fried battered fish and fried potatoes, were sold separately in the streets of London.

“Fried fish, although becoming more popular in town, especially near pubs, was still mostly considered a racecourse delicacy. At Epsom in 1850 there were fifty fried-fish sellers, whose customers were mostly the boys who held the carriage-horses’ heads and did odd jobs, or were themselves sellers of other goods. Fried-fish sellers charged a penny for a piece of fish and a slice of bread, sold from newspaper-lined trays that hung from straps around their necks.” — Flanders, Judith. The Victorian City. London: Atlantic Books. 2012. Page 286.

The combined dish emerged during the industrialization of Britain. The first Fish and Chip shop appeared around the early to mid 1860s; it’s disputed whether it was in the industrial areas of northern England, or in London.

The London candidate is the shop opened in 1860 by Joseph Malin, who was Jewish, on Cleveland Street, London in 1860. Some sources feel, though, that he didn’t start selling chips combined with fried, battered fish until 1865. In any event, Malin’s went on to become a small chain of fish and chip shops in London called “Malin’s of Bow.” [Ed: The business was bought out in 1969 by the American company Arthur Treacher, both the name and the recipes.]

The northern candidate is the business started by a Joe Lees in a wooden hut in the market at Mossley, near Oldham, in Lancashire. Lees had worked as an engineer at an Oldham cotton mill. He devised a portable fryer he called “the Dandy”, with a tall chimney, to use at his market stall. He sold the fish, and gave away the chips. In 1863, Joe Lees moved from the market to a permanent shop in Mossley, calling the eatery “Lees’s Chip Potato Restaurant.”

Still, even by the 1880s, there were many fried fish shops in London that were just as likely to serve their fried fish with bread instead of chips:

“They nearly all of them hurried to the local cookshops to spend their few halfpence. In many instances it was only one penny a girl expended. Experience, no doubt, has taught them what is the best value for such a coin obtainable in that region, and the popular voice is unmistakably in favour of a thick slice of bread and a piece of fried fish – not a large one, no bigger, perhaps, than the palm of one’s hand – but possessed of potent “relishing powers,” if a judgment may be formed on the extraordinary long way off that the fried fish shop appeals to one’s sense of smell: and capable of bestowing an appetising flavour to the last bite of the thickest slice that might be cut from a loaf.” [6]Greenwood, James. “Girls of the factory” in “Toilers in London.” London: Diprose & Bateman. 1883.

The predilection for bread with fried fish still survives today in the slices of buttered bread that people often eat with their fish and chips.

By the 1900s, fish and chip shops were becoming common in urban areas of any size in England and Scotland. By 1910, there were about 25,000 fish and chip shops in the UK, mostly run by families, which provided lunches and early evening meals to working class people.

The National Federation of Fish Friers was founded in Manchester in 1913.

The whole industry got a boost in 1920, with the invention of a mechanical potato peeler for the shops.

It was only in the 1930s, though, that fish and chips started to be seen as something other than just a meal for the working classes.

Mass acceptance was guaranteed by World War II, as fish and chips were one of the few foods not rationed. Fish was not rationed, nor were potatoes, though cooking fats were in scarce supply. Still, Winston Churchill always vetoed any mention even of putting them on a rations list, out of concern for the morale impact that might have.

UK immigrants to Australia, Canada and New Zealand established fish and chip shops there, where they vied with Chinese restaurants for popularity.

Up until about the 1950s, most fish that were caught in Britain went to the Fish and Chip market. By the 1950s, though, the fish and chip market began losing its position as the default take-out, as ethnic take-out restaurants started to appear more in the UK, particularly Indian and Chinese.

The oldest fish and chip shop in the world, in operation since 1865, is in Yeadon, West Yorkshire, 14 ½ km north of Leeds. [7]Visit England. Dine at The Oldest Fish & Chip Shop in the World. Accessed July 2021 at https://www.visitengland.com/experience/dine-oldest-fish-chip-shop-world

National Chip Week in the UK is in February, sponsored by the British Potato Council.

In 2011, a team of research psychologists headed by a Professor Charles Spence at Oxford University concluded that eating fish and chips with your fingers, particularly by the seaside with the sound of waves, would convince the brain that they tasted better than usual. [8]Hayward, Stephen. Fish and chips taste better beside the seaside, say scientists. London: Daily Mirror. 20 February 2011. 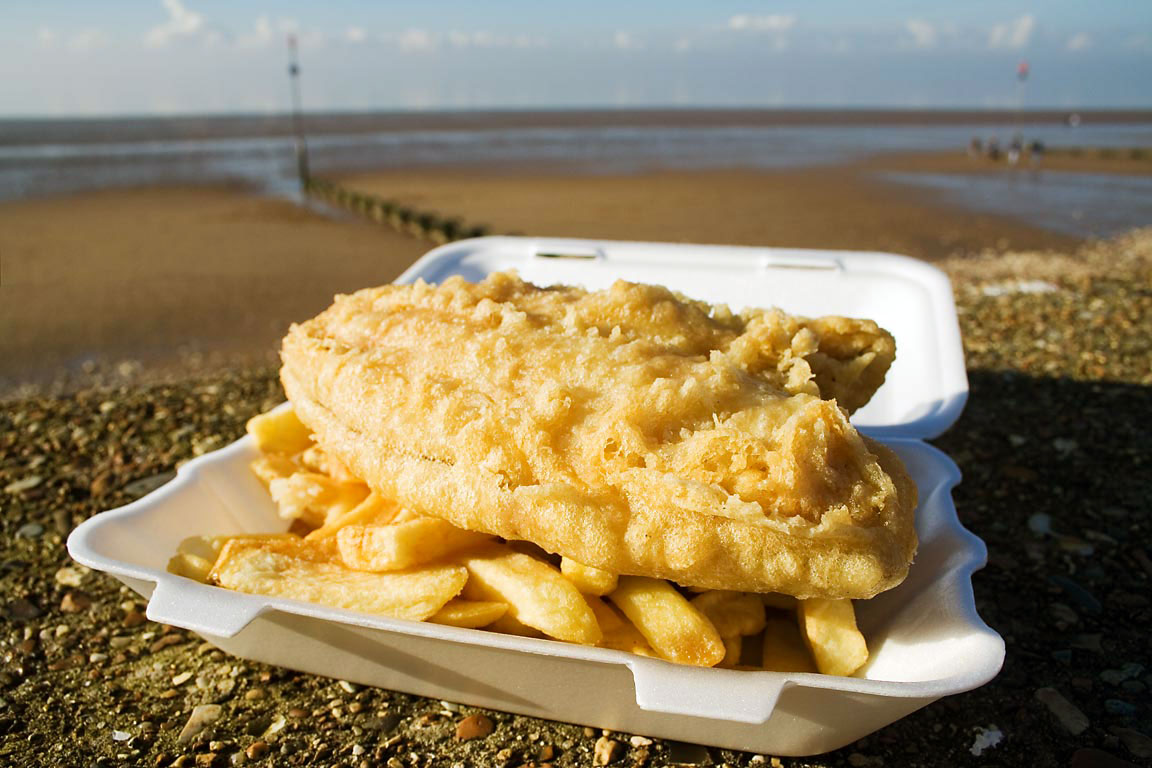 On Saturday, 2 July 2011, The Wensleydale Heifer pub in the Yorkshire Dales National Park set a Guinness World Record for preparing the largest portion of fish and chips ever. The serving comprised one single, whole portion of battered halibut weighing 18 kg (40 pounds), and 27 kg (60 pounds) of hand cut chips. A pan had to be custom-made to fry the fish in. 18 litres (four gallons) of batter were required to batter the piece of fish. The fish and chips were accompanied by a vat of mushy peas.

This web site generates income from affiliated links and ads at no cost to you to fund continued research · Information on this site is Copyright © 2023· Feel free to cite correctly, but copying whole pages for your website is content theft and will be DCMA'd.
Tagged With: Fish