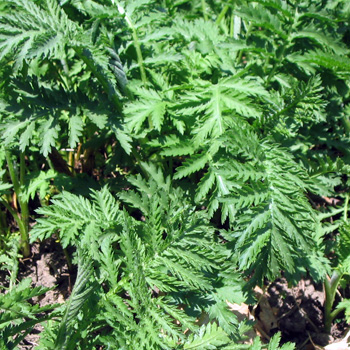 Tansy is a wildflower native to Europe and Asia that has been introduced to various parts of the world where, in some areas, it has become invasive.

The plant is a perennial, growing 2 to 4 feet (60 to 120 cm) tall, blossoming with yellow flowers. The plant has a smell similar to camphor.

Historically, its usage was common. Now, however, it is no longer recognized as safe for consumption owing to the presence of thujone. That said, it is still used as a flavouring in some alcoholic beverages, but even then, the essential oil derived and used from it will be tested to make sure it is thujone-free.

Tansy used to be grown in herb gardens, especially medicinal ones.

It was largely the leaves that were used.

Tea was made from the leaves; young leaves were shredded and mixed into dishes such as desserts.

Preserved meat would be rubbed with Tansy leaves to ward off bugs.

Tansy used to be served in dishes at Easter, both to mirror the bitter herbs of Passover, and because it was thought to kill any internal parasites you had acquired during Lent by eating so much fish.

Sometimes, Tansy roots were preserved in honey, and used as a folk treatment for gout.