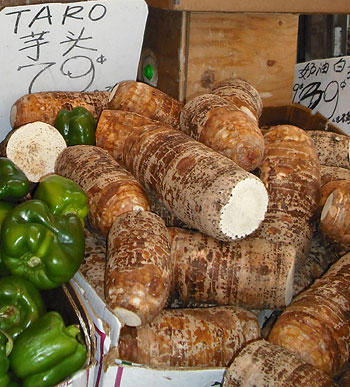 Taro is a root vegetable. Above ground, it is a bush that can grow anywhere from 3 to 6 feet tall (1 to 2 metres.) The bush is a perennial plant, but it is harvested like an annual.

The skin is rough and hairy, with distinct rings. Inside, the roots are an off-white, with an occasional streak of purple, yellow, or pale pink. All colours turn violet or violet grey when cooked.

When cooked, the root has a sweet flavour like boiled chestnuts.

You can peel the roots and cook them like potatoes. The roots have a juice that can irritate the skin, so always wear gloves when working with them.

Once peeled, put them in water right away so that they don’t discolour.

The leaves can be eaten, but never raw. They must be boiled for at least 15 minutes to destroy the toxic oxalic acid in them. 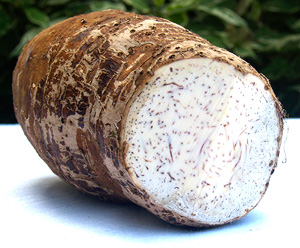 Do not refrigerate. Store in a cool place for up to a few days.

Called “Eddo” in the West Indies.

This web site generates income from affiliated links and ads at no cost to you to fund continued research · Information on this site is Copyright © 2022· Feel free to cite correctly, but copying whole pages for your website is content theft and will be DCMA'd.
Tagged With: Oxalic Acid, Root Vegetables