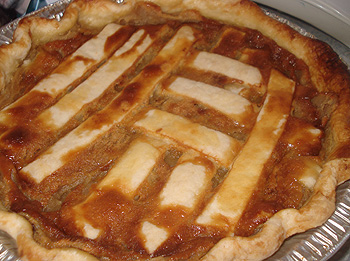 The star ingredient for the filling of the pie is sugar — either cane or beet sugar.

It is now considered “traditional” in the Waterloo and Charleroi areas of Belgium, which historically were sugar beet growing areas. In Belgium, it is usually served with a cup of coffee.

A version is also made in Québec.

In Belgium, Tarte au Sucre is a shallow pie with a shallow, yeast-risen crust. Two versions exist: one uses white sugar, and the other version uses brown sugar (“cassonade.”)

The version made in the Charleroi area is made with white sugar.

To the white sugar is added egg and cinnamon. This mixture is spread over a crust made with flour, milk, egg, butter and yeast.

The assembled pie is sprinkled with a bit more white sugar, allowed to rise again for half an hour, then baked.

Brown sugar is used in the Waterloo area.

The crust is made with flour, milk, egg, butter and yeast. This is sprinkled with brown sugar, on top of which a mixture of egg and crème fraîche (sometimes also milk) is poured. It is then dotted with butter and sprinkled with vanilla sugar, and baked.

In Waterloo, there is an association called “La Confrérie des Maîtres Paveûs, Scribeux et Mougneux de la Tarte au Sucre de Waterloo” (founded 1993), dedicated to the promotion of good Tarte au Sucre. Every year, the association awards a rating of one to three stars to bakeries in the area based on the quality of their Tarte au Sucre.

In Québec, Tarte au Sucre is a much deeper pie, with about an inch (2 ½ cm) of filling. 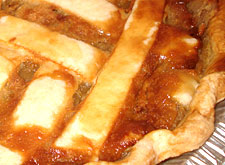 To make it, a pie tin is lined with a standard pie crust (short crust.)

The filling is made of brown sugar, cream and a small amount of flour (some recipes add a bit of butter as well.) This is simmered in a pot to thicken it, then flavoured with vanilla.

The filling is then poured into the crust, and baked until set.

Some versions call for maple syrup instead of sugar, while still calling themselves Tarte au Sucre, but even in Québec many people disagree and say no, that using maple syrup makes it into a maple syrup pie instead.

This web site generates income from affiliated links and ads at no cost to you to fund continued research · Information on this site is Copyright © 2022· Feel free to cite correctly, but copying whole pages for your website is content theft and will be DCMA'd.
Tagged With: Belgian Food, Québécois Food