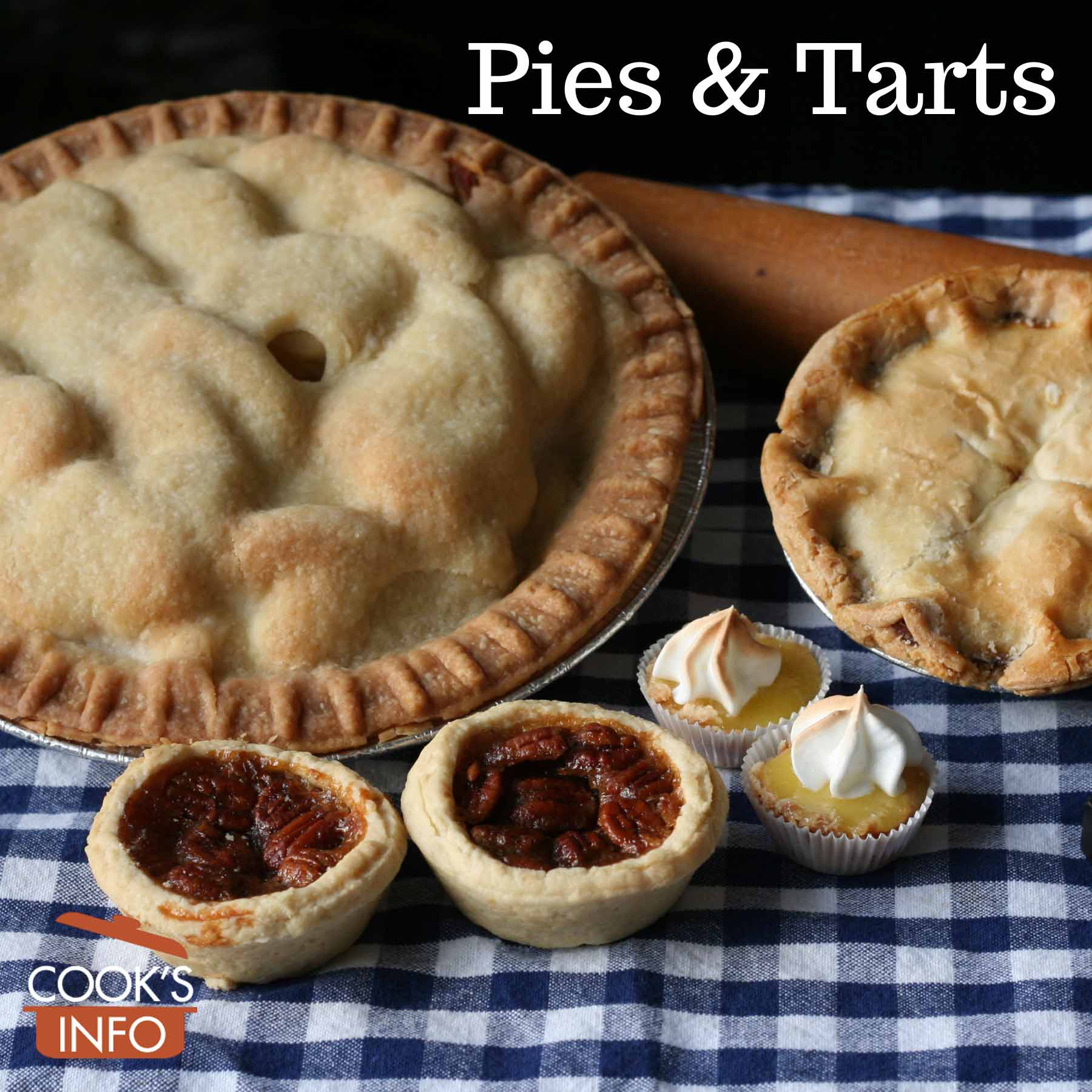 A pie — or a tart — is an item cooked with a crust. The crust is usually a pastry crust made from wheat flour; there will usually be a bottom crust, and often a top crust as well. Some pies may have only a top crust (these would usually be savoury ones) but no bottom crust.

In the broadest sense of the word, anything enclosed in pastry is a pie: including fruit turnovers, empanadas, panzerotto, Cornish pasties, chicken pot pies, and Melton Mowbray Pork Pies. But the term also includes items with a non flour crust, such as Shepherd’s Pie and Cottage Pie.

Tarts are smaller versions of pies, meant to be enough for one individual — a single serving. A small savoury tart though is almost never referred to a tart, but rather a small pie.

Early pies always had a top, but more modern pies, from about the early 1800s on, may or may not use a top crust. Sweet pies are also somewhat of an innovation: pies used to be all savoury for the most part.

In the old days, the pie crust wasn’t eaten (see separate entry on Pastry Crust.) Nowadays, a good pie is defined by its crust as much as anything: specifically, how flaky the crust is.

Though pies are made throughout Europe, it was the English who clasped them to their hearts and loved them.

Double-crust pies are pies with a top and bottom crust. In the days before refrigeration, many people preferred making them because they kept better than pies with no top crust. A double-crust fruit pie, if kept in a cooler part of the kitchen, would keep for three to four days.

Definition of a standard dessert pie

Their specifications might seem a bit “hard-core” for what is after all “just a pie.” Bear in mind, though, that the US Department of Defense orders pies by the hundreds of thousands a year, and likely wants to ensure that the pies will fit into standardized chilled storage spaces. Standardized pies would also allow easy and effective portion control when they are being served up.

In any event, their specifications provide a useful “basic” description of sweet pies.

They allow three sizes, in terms of width and weight:

The civilian arm of the American government also sets out standards for the pies it orders. Their definitions [2]Item A-A-20074A. Alphabetic List of Federal Specifications and Commercial Item Descriptions list of the General Services Administration’s Federal Supply Service. recognize the same sizes and weights above that the military is after, adding a smaller size of:

Most actual civilians would, of course, call that small size a “tart” rather than a “pie.”

Neither the military nor the civilian list seems to cover the depth of the pie plate, but then, that would be controlled by the weights asked for.

You don’t have to do any of these following tips to make great pies, but they can raise a pie to visual glory.

Pie tins (and bread tins, for that matter) didn’t come along until the 1700s. Before then, pies were rectangular. You spread out your dough in a long, rectangular shape and pressed the sides up to make thick, sturdy edges to hold the filling in. Old recipes referred to this as making a “coffyn of paste.” The concept of round pies appears to have originated with the colonists in America, and may well have started with someone deciding to try baking a pie in a round cast-iron skillet.

It’s a myth that Queen Elizabeth I made the first cherry pie. It’s hard to know who cooks up these howlers, but cherry pies were being made long before that. Though Elizabeth probably enjoyed eating cherry pies as much as anybody, the chances that she spent any time in the kitchens at any of the seven palaces she lived in from time to time are slim (the palaces are, by the way, Hampton Court, Greenwich, Nonsuch, Oatlands, Richmond, Whitehall and Windsor).

In the days before saran wrap and refrigeration, the desired shelf life of a pie was an important consideration in the decision whether to make a cream pie or a fruit pie:

“Mom was always baking. We had a coal and wood stove, and I knew if I could hold my arm in the oven for a few seconds, it was just right for a cake. If it nearly burned the fuzz off my arm, it was hot enough for a pie. That’s how we knew. Early on, Mom made the pastry and I filled the pies.”

The usual batch was six pies. It was a time when pies were an essential part of a woman’s domestic arts, and her homemaking skills and reputation as a cook were judged on the flakiness of her pastry.

Thanks in part to the excellent leaf lard from Ed’s rendering business, Ruby Elford excelled in pie crust, rolling out a batch of never fail pastry every Saturday, so there’d be pie for the onslaught of Sunday company.

She waited eagerly for rhubarb and saskatoons in June, strawberries in July for her famous double-crust strawberry pie, Okanagan peaches in August, green apples in September. During the Depression, some women filled their pies with sour cream and raisins; with mashed carrots, which tasted just like pumpkin; with mock mincemeat, made with green tomatoes and apples. If wartime shortages or tight budgets left them without fresh lemons, they could make a darn good vinegar pie.

Most of the time in those pre-Saran, pre-refrigerator days, Ruby stuck with double-crust pies, because they were better keepers. Except for a family favourite, sour cream and raisin, she avoided most cream pies, because they spoiled so fast.

Fruit pies were another matter. They were reliable. You could put a double-crust fruit pie in the cool of the north-facing back porch, covered with a dinner plate to ward off any passing flies, and it would keep for three days, maybe four. In winter, the porch became a walk-in freezer, and cookies and cakes would freeze beautifully.” — Schultz, Judy. Jean Paré: An Appetite for Life. Edmonton, Alberta: Company’s Company Publishing Limited. 2006. Pp 7-8.

According to Dr Don Schaffner, Specialist in Food Science and Distinguished Professor at Rutgers University, the feeling about cream versus double crust fruit pies actually made sense from a science point of view: “If you bake it you kill vegetative spoilage organisms. The filling is acidic so there is no risk of spore formation or growth. And then the crusty outside layer is low water activity so there is no growth on the surface.” [3]Don Schaffner to Randal Oulton. 26 November 2021. Twitter. https://twitter.com/bugcounter/status/1464365859007258630

“In many families a feast would be incomplete without pie and they are served even on ordinary occasions at least two or three times per week. ‘Handy as pie for breakfast’ is an old saying we consider obsolete in application at present time, but in spite of the warnings of those who go out, even unto the byways, calling upon all those who still indulge their appetites contrary to the advanced rules of hygenic eating, we find a surprising number of our stout-minded and old-fashioned folk still cling to the notion that pie is a nice and handy relish for breakfast.

However, there are pies and pies. The English custom serves a meat or game pie, either hot or cold, for breakfast, and this is certainly more to be commended. Pie being among those dishes considered rather indigestible, even for the hearty and robust, should be given plenty of time during the most active hours of day for digestion: therefore, the morning or midday meal is the proper time for pie-eating. The immunity enjoyed by those, who, in certain rural sections, still observe the custom of serving pie for breakfast, may be accounted for by the active, outdoor life they lead which calls for a larger amount of “staying” food than the less active and less exposed workers could possibly accommodate with comfort of safety.” — Table and Kitchen Column. Trenton, New Jersey. The Trenton Times. Thursday, 23 January 1902. Page 6.

“[In Victorian London, piemen] either had fixed pitches, or were flying piemen, walking the streets carrying a tray about three feet square, either on their heads or hanging from a strap around their necks. In the 1840s, the Corn Laws [Ed: import restrictions on grain] kept the price of flour high and, with it, the cost of pies. To maintain their price at the expected penny, the piemen were forced to scrimp: their pies were made with cheap shortening, or had less filling, or poor-quality meat. Many of the legends of cats’-meat, or worse, in pies spring from this period. In 1833, Sam Weller advises the horrified Mr Pickwick, “Wery good thing is weal pie, when you…. is quite sure it ain’t kittens,” but in summer ‘fruits is in, cats is out’. The legend of Sweeney Todd, the barber who murdered customers for his neighbour to bake into pies, was also created in the Hungry Forties. Even the repeal of the Corn Laws did not help, because once flour became cheaper, pie shops began to open, which damaged the street-trade of the piemen even further.

Their customer base became confined almost entirely to boys, who worked in the streets, eating coffee-stall breakfasts, shellfish at lunch, hot eels or pea soup for dinner, perhaps with a potato, and a pie to fill in the gaps when they could afford it. What the boys loved about piemen was their method of charging. A pie cost a penny, but all piemen were willing to toss a coin for one: if the customer won, he got the pie free; if the pieman won, the pieman kept both pie and penny.” — Flanders, Judith. The Victorian City. London: Atlantic Books. 2012. Page 285-286.

Pie was spelled “pye” in Middle English. “Coffyn” was the word for crust.

This web site generates income from affiliated links and ads at no cost to you to fund continued research · Information on this site is Copyright © 2022· Feel free to cite correctly, but copying whole pages for your website is content theft and will be DCMA'd.
Tagged With: American Food, Baking, British Food