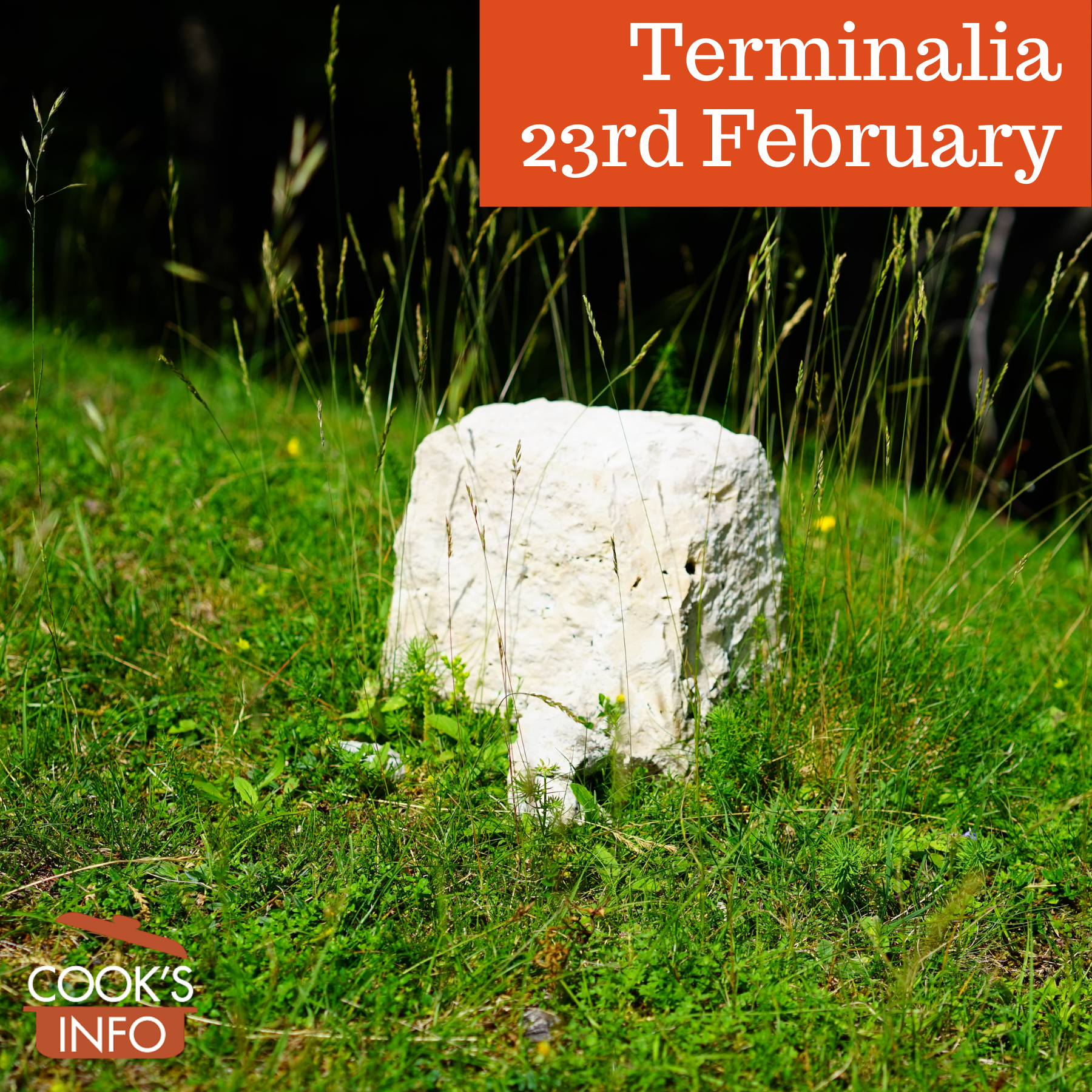 Terminalia was a Roman festival held on the 23rd of February to honour Terminus, the god of boundaries.

Terminus was a minor, workaday Roman god, old even by Roman standards.

Terminus represented law, order, and peaceful co-existence with neighbours, along the lines of the maxim of “good fences make good neighbors”.

His domain included fences or boundary lines between farms. Boundary marker stones set out to divide fields were consecrated to him with offerings of food and an animal sacrifice to Terminus. Because such boundaries were sacred to this god, to disturb a boundary marker was sacrilegious.

The date was chosen as it was the end, the terminal point, of the Roman calendar year at one time, so the day honoured a temporal boundary as well as physical boundaries.

“One may ask why should Terminus be celebrated in February? An obvious answer is that February was once the end of the year… A practical reason is that it is much easier to find a boundary line before spring growth begins and underbrush obscures markers.” [1]Michels, Agnes K. “Roman Festivals: January—March.” The Classical Outlook, vol. 68, no. 2, American Classical League, Winter 1990-1991, Page 46, http://www.jstor.org/stable/43936713.

On this day, farmers would meet at fences or boundaries between their properties, do some offerings to the god, and then have a feast:

“On the festival the two owners of adjacent property crowned the statue with garlands and raised a rude altar, on which they offered up some corn [grain], honeycombs, and wine, and sacrificed a lamb or a sucking pig. They concluded with singing the praises of the god.” [2]Smith, William. Terminalia. In: A Dictionary of Greek and Roman Antiquities. London: John Murray. 1875. Page 1112. Accessed February 2021 at https://penelope.uchicago.edu/Thayer/E/Roman/Texts/secondary/SMIGRA*/Terminalia.html

After the offerings, there would be a big feast that everyone in the area would join in with. [3]Struck, Peter T. Terminus. Penn State Classics Dictionary. Accessed February 2021 at https://www2.classics.upenn.edu/myth/php/tools/dictionary.php?regexp=TERMINUS&method=standard

“Neighbours gather sincerely, and hold a feast,
And sing your praises, sacred Terminus:
‘You set bounds to peoples, cities, great kingdoms:
Without you every field would be disputed.
You curry no favour: you aren’t bribed with gold,
Guarding the land entrusted to you in good faith.'” [4] Ovid, Fasti 2.639–684. Retrieved July 5, 2007.

A bigger public festival to honour Terminus was held in Rome itself, “at the sixth milestone on the road towards Laurentum, doubtless because this was originally the extent of the Roman territory in that direction.” [5]Smith, William. Terminalia. In: A Dictionary of Greek and Roman Antiquities. London: John Murray. 1875. Page 1112. Accessed February 2021 at https://penelope.uchicago.edu/Thayer/E/Roman/Texts/secondary/SMIGRA*/Terminalia.html

To celebrate today, you could make something with bread, honey, wine, lamb or pork. Or meet your neighbours at the back garden fence and have a glass of wine with them! 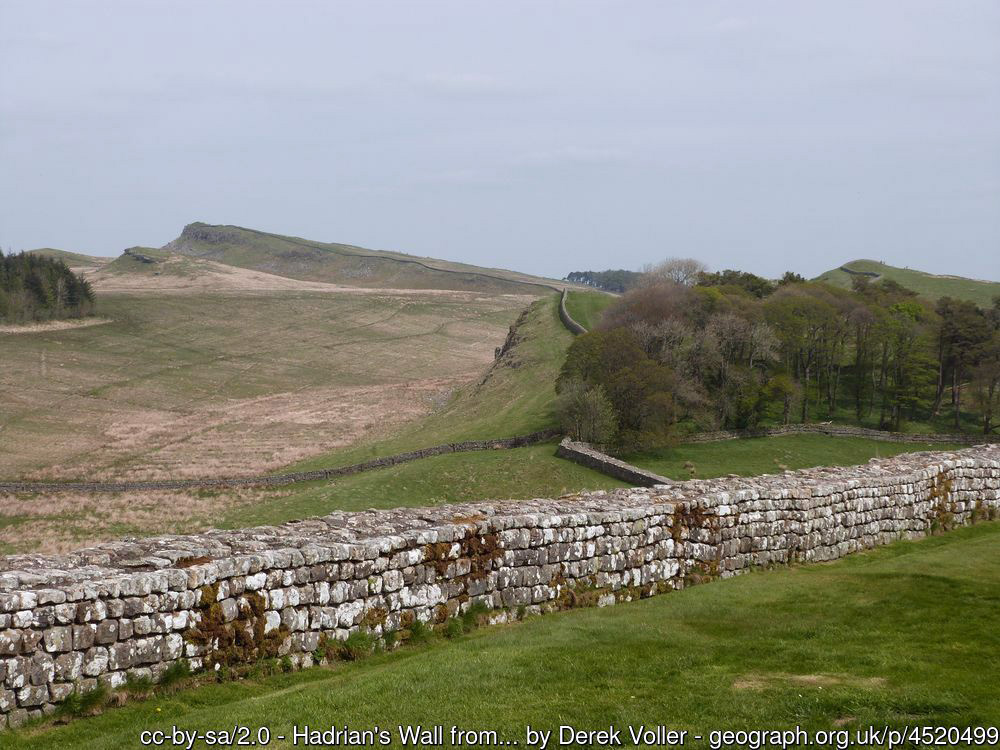 Numa Pompilius (753–673 BCE) was a king of Rome. He “ordered that every landowner should mark the boundaries of his property by stones to be consecrated to Jupiter Terminalis, and at which, every year, sacrifices were to be offered at the festival of the Terminalia.” [6]de Sloper, Juan Alejandro Forrest. Boundary Day. 23 February 2016. Accessed February 2021 at https://www.bookofdaystales.com/tag/terminalia/

There was a small shrine to Terminus on the Capitoline Hill.

A large, grand new temple for Jupiter, the king of the gods, was planned for the spot where Terminus’ shrine was. Priests did divinations to see if Terminus would consent to having his shrine moved to make way for Jupiter. But the result of the divinations was a resounding answer of “no”. Terminus, the god of boundaries, who protected boundaries from being violated, refused in turn to be displaced, not even for Jupiter.

So Terminus’ shrine was left in place, and the temple to Jupiter was built around and over it, with a hole in the ceiling portion over where the shrine stood, since sacrifices to Terminus were to be in the open air.

“The whole throng of gods yielded to Jupiter and made room:
But as the ancients tell, Terminus remained in the shrine
Where he was found, and shares the temple with great Jupiter.
Even now there’s a small hole in the temple roof,
So he can see nothing above him but stars. [7] Ovid, Fasti 2.639–684.

A motto assigned to Terminus is “Concedo Nulli” (I yield to no one) for his refusal to move. 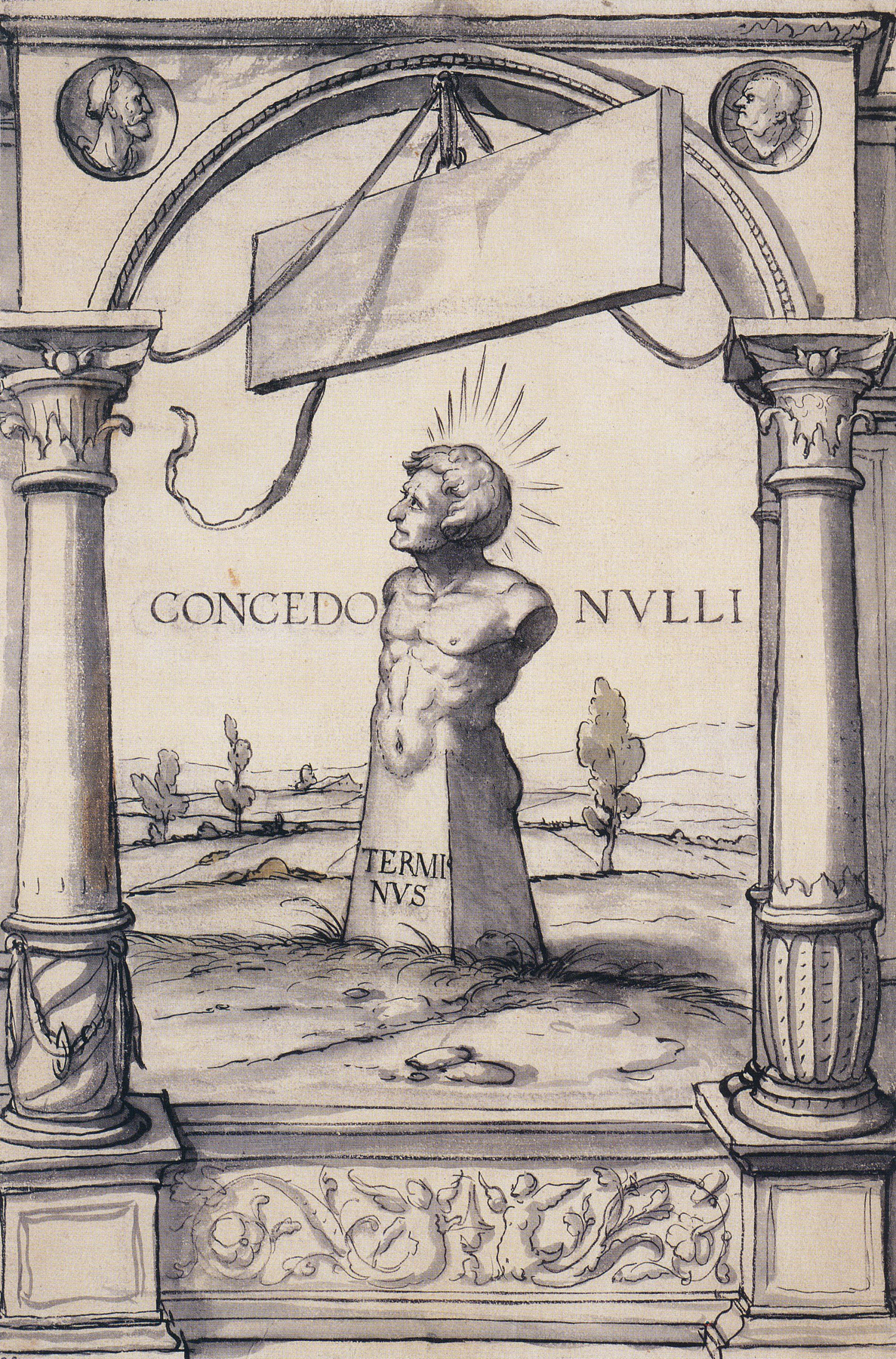 “When the night had passed, see to it that the god who marks the boundaries of the tilled lands receives his wonted honour. O Terminus, whether thou art a stone or stump buried in the field, thou too hast been deified from days of yore. Thou art crowned by two owners on opposite sides; they bring thee two garlands and two cakes. An altar is built. Hither the husbandman’s rustic wife brings with her own hands on a potsherd the fire which she has taken from the warm hearth. The old man chops wood, and deftly piles up the billets, and strives to fix the branches in the solid earth: then he nurses the kindling flames with dry bark, the boy stands by and holds the broad basket in his hands. When from the basket he had thrice thrown corn into the midst of the fire, the little daughter presents the cut honeycombs. Others hold vessels of wine. A portion of each is cast into the flames. The company dressed in white look on and hold their peace. Terminus himself, at the meeting of the bounds, is sprinkled with the blood of a slaughtered lamb, and grumbles not when a suckling pig is given him. The simple neighbours meet and hold a feast, and sing thy praises, holy Terminus: “Thou dost set bounds to peoples and cities and vast kingdoms; without thee every field would be a root of wrangling. Thou courtest no favour thou art bribed by no gold: the lands entrusted to thee thou dost guard in loyal good faith. If thou of old hadst marked the bounds of the Thyrean land, three hundred men had not been done to death, nor had the name of Othryades been read on the piled arms. O how he made his fatherland to bleed! What happened when the new Capitol was being built? Why, the whole company of gods withdrew before Jupiter and made room for him; but Terminus, as the ancients relate, remained where he was found in the shrine, and shares the temple with great Jupiter. Even to this day there is a small hole in the roof of the temple, that he may see naught above him but the stars. From that abide in that station in which thou hast been placed. Yield not an inch to a neighbour, though he ask thee, lest thou shouldst seem to value man above Jupiter. And whether they beat thee with ploughshares or with rakes, cry out, ‘This is thy land, and that is his.’” There is a way that leads folk to the Laurentine fields, the kingdom once sought by the Dardanian chief: on that way the sixth milestone from the City witnesses the sacrifice of the woolly sheep’s guts to thee, Terminus. The land of other nations has a fixed boundary: the circuit of Rome is the circuit of the world. — Ovid. Fasti 2. XII. KAL. 23rd. [639] Translated by Frazer, James George. Loeb Classical Library Volume. Cambridge, MA, Harvard University Press; London, William Heinemann Ltd. 1931.

“The antiquarian Gellius quotes the archaic formual with which the praetor proclaimed the Compitalia for a day at the end of December or beginning of January: Dienoni (=die nono) populo Romano Quiritibus Compitalia erunt.

A compitum is a crossroads in the country, or in the city a place where two major roads or streets cross. The former are apt to serve as boundaries between farms, and are marked by a shrine shared by the Lares of the neighboring farmers. When the hard farm work of fall and early winter is finished, the neighbors join in a celebration. On the night before, they hang up at the compita a woolen doll (effigies) for each of the free members of their families, and a woolen ball for each slave. A broken yoke is hung there too. The next day’s party is shared by the slaves, to whom even Cato, miser as he was, allowed an extra ration of wine. The sacrifice to the Lar would probably give them also meat to eat, a luxury they rarely had. We have no description of a rustic festival in Latin literature which can be identified as the Compitalia, but one can see what they may have been like in, for example, Verg. G. 1.338-50, Tib. 1.1.19-24, and Hor. Carm. 3.18.

The urban Compitalia are naturally different. They are related not to estates or farms, but to vici in the city, what we would call wards, of which there were 265 in Augustan Rome. Each vicus had its own Lares with their shrine, whose cult was in the charge of magistri, usually freedmen, and collegia were associated with them. At some time during the Republic, games (ludi Compitalicii) were added.” [8]Michels, Agnes K. “Roman Festivals: January—March.” The Classical Outlook, vol. 68, no. 2, American Classical League, Winter 1990-1991, Page 44, http://www.jstor.org/stable/43936713.

This web site generates income from affiliated links and ads at no cost to you to fund continued research · Information on this site is Copyright © 2022· Feel free to cite correctly, but copying whole pages for your website is content theft and will be DCMA'd.
Tagged With: Roman, Roman Holidays