Lambs are the off-spring of sheep. The meat from lamb has a milder taste than that from grown sheep.

Sheep bear lambs in early spring. The lambs drink mother’s milk up for three to four weeks, at which time they then start on grass and start to increase in size.

Some say that Easter, when it is traditional to serve lamb, is actually too early for good tasting lamb, as they haven’t had enough time in pasture yet to eat grass and forage. Others say that when lambs start to graze, the flavour gets strong.

Lamb is usually sold for meat by August / September.

Lamb from New Zealand used to always be brought north by ship, frozen. Now fresh is brought up by plane.

Many people do not like the taste of lamb fat.

When a lamb is young, its bones will be pink. As it gets older they will turn white. The meat also turns from a brownish red to a cherry red.

The carcass weight will be about 50% of live weight. Of the carcass weight, 70% will be retail cuts, 30% will be fat and bone. Lamb is aged like beef to increase its tenderness and flavour. It needs to be hung at least a week.

Baby lamb is usually sold whole, halved or quartered. Only when it’s older will a butcher usually attempt traditional cuts.

Lamb can be divided into roughly 3 areas of the animal: Lamb Fore End, Lamb Middle and Lamb Hind End. Or more precisely, working backwards from the neck of the lamb, the shoulder section comes first, then the rib section, then the loin, then the rump (aka chump.)

Choose one of the following for a full-size cut chart:

In the US, the neck is either included in with the Shoulder Primal Cut, or it is just processed as slices called “Neck Slices.” It is harder to sell cuts labelled as “neck” in the US.

In the UK, 2 different cuts are made with the neck: Scrag End, and the other called “Middle Neck” or just “Neck.”

The cut called “shoulder” in the US is divided in the UK into two cuts: “scrag” at the very top, and below that, “shoulder middle neck.”

The cut called “sirloin” in the US is called “chump” in the UK.

The rear leg, one entire cut in the US, is divided in the UK into “fillet end of leg” at the top, and “shank end of leg” below that.

For a savoury lamb roast, make slits in the lamb you are going to roast, and press an anchovy fillet in each slit along with some garlic slices and rosemary.

To roast large joints of lamb: heat oven to 230 C  (450 F.) Cook joint for 15 minutes so that the centre gets heated, then reduce heat to 200 C (400 F) and roast at this temperature for the following times according to desired doneness:

Generally, people don’t make gravy with lamb as is too fatty. That’s why it was traditionally served with mint sauce. To make gravy for lamb, you generally need to start from a previously prepared lamb stock, or have had time to set the “jus” in the fridge, to allow every last bit of the fat to congeal to the top to be removed and discarded.

To braise lamb, brown it first in a frying pan. Don’t trim away all the fat, as the fat will help to stop the meat from drying out during this. Lamb cooks faster by braising than many other meats — check it after 45 minutes.

Lamb consumption in the United States

Americans were not big fans of lamb in the second half of the 1900s.

“Americans who served in Europe during World War II were fed canned mutton, which they disliked because of its strong musky flavor. Many of the soldiers, when they returned home after the war, banned lamb meat from dinner tables – contributing to a long decline in U.S. lamb consumption.

Lamb was often reserved for sale at the market; the family and the poorer people would eat pork.

Some Greek and Roman writers believed that the wind direction could influence the sex of the lamb being conceived:

“Some writers told… stories about … the wind’s responsibility for the sex of the lamb. The second century writer Aelian wrote in his On the Characteristics of Animals (2.48) that sheep who were being impregnated by a ram would conceive male lambs if there was a north wind and female lambs if there was a south wind.” [2]King, Helen. Wind eggs and the uterine mole. Module 5, 1.1. Health and Well-being in the Ancient World. Open University. Accessed May 2020 at https://www.open.edu/openlearn/ocw/mod/oucontent/view.php?id=65962&section=1.1 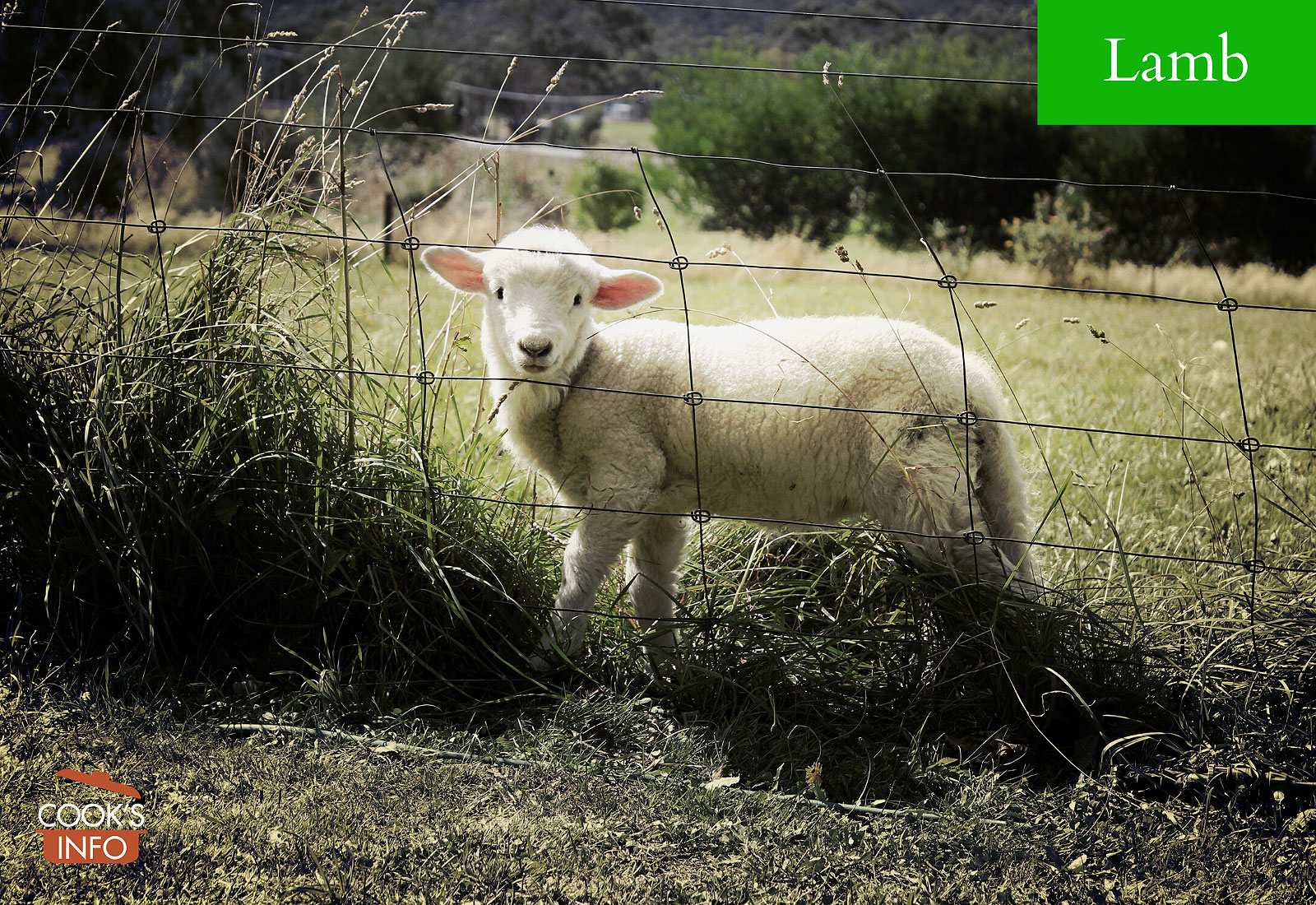 Agneau d'herbe is a lamb brought up first on its mother's milk, then allowed to graze outside in fields and meadows on fresh grass, then fed cereals. The age and weight when sold to market will vary by breed, and by regional preference. It can range...

An Agneau de Bergerie is a lamb that has grown up in a sheltered sheep-fold. It is raised first on mother's milk, then on other milk provided, cereals and grains. The age and weight when sold to market will vary by breed, and by regional preference....

Agneau de Lait des Pyrénées is lamb born and raised in the Pyrénées-Atlantiques region of France, or in terms of historical provinces of France, Aquitaine, Midi-Pyrénées and the South-East. The sheep breeds used in producing the lamb can be Manec...

A Barnsley Chop is a double-lamb chop made by cross-cutting through a saddle of lamb. It is actually two chops with their rib bones still joined at the top, where the spine is. A Barnsley Chop will weigh about 2 to 3 pounds (900g to 1 1/3 kg)...

Baron of Lamb is the rear half of a lamb carcass. It includes the back, rump, belly and the hind 2 legs. It will weigh up to 10 pounds (4 1/2 kg.) Cooking Tips For roasting, Language Notes Sometimes referred to as "Saddle of Lamb", though that...

Carré of Lamb is a French-inspired term used to describe either "Best End of Neck" (with 8 bones) or "Rack of Lamb" (cut with 6 ribs.) The meat is cut, trimmed and prepared as though it were about to be then cut into chops, but left intact at that ...

Ground Lamb is ground lamb meat, usually from the shank and neck as well as trimmings from the breast, flank, leg, loin, rib, or shoulder The fat content can vary. Sample quantities of ground lamb obtained from a lamb weighing 120 pounds (54 1/2...

Lamb Fell is a thin, papery bluish membrane on top of the outer layer of fat in lamb. Very young lambs won't have developed a "fell" at all. It is almost always removed by all butchers from small cuts of lamb, such as chops. It is sometimes left...

Lamb Shoulder is a cheaper roasting joint than Leg of Lamb because the shoulder has more fat, and needs low and slow roasting to render it out. The fat in it, however, guarantees the meat will come out moist. It is cut from the upper part of the...

Lamb Tongue is a tough, lean, boneless meat that needs long, slow braising. When cooked, it can be sliced and served hot with the braising juices, or cooled and sliced and used as a sandwich meat. Many people like Lamb Tongue pickled. You can...

Lamb's Fry is a dish that can include all offal from the lamb, e.g organs such as heart, liver and lungs. It is eaten in Italy and northern England. In northern England and the southern US, it means particularly the testicles. In New Zealand...

Paillard of Lamb are medium to thin, large boneless slices of lamb, pounded thin if necessary. The slices can be cut from several areas of the lamb: rump, flank, leg or loin.

Pauillac Lamb is a lamb whose raising methods have been protected by law in Europe under its PGI status, which was received in 2003. The lambs are supposed to be both born and raised in the Gironde area ("Agneau né et élevé en Gironde") according to...

Pavé literally just means a "paving stone." So, a Pavé of Lamb means a slab, a chunk, or as we are likely to say in English, a chop or a steak, thickly cut. It can come from any part of the lamb, particularly the Rack of Lamb, or the leg. It i...

Salt Marsh Lamb is a term that means the lamb has eaten in pastures close to the sea side, which are often flooded by the sea in spring. This location makes the grasses rich in sodium and iodine. The lambs can also eat samphires and sea kale. The...

Scottadito is strips of lamb. It's not really a cut, just a way of presenting and eating. They are meant to be eaten with your hands. They can be "abbacchio scottadito", which are rib strips, grilled quickly, or "Costolette scottadito", which...

Sisteron Lamb is lamb raised in the Sisteron area of Provence, France. It's a legal European PGI definition, passed into law on 20 December 2005. The area where the lambs can be raised is quite wide: all of the French departments of Hautes-Alpes...

Stewing Lamb is chunks of meat, either boneless or bone-in, that require low, slow, moist cooking, and so are used for stews, casseroles, tagines and hotpots. It is often cut from the neck. When bought already cut up, it will usually be in boneless,...

Suckling Lamb is milk-fed lamb that is slaughtered before it is weaned. It is 30 to 45 days old, and will weigh between 22 and 33 pounds (10 to 15 kg.) The flesh and fat are white and very tender. It has a very mild taste; some lamb fans feel...