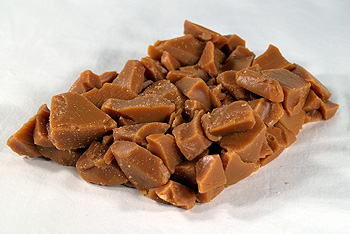 Contents hide
Toffee is a hard and brittle candy.

The base ingredients to make it are a sugar (either sugar or molasses), butter, and water. Some commercial makers may use corn syrup as the “sugar”, and fats other than butter (such as vegetable oils.) Flour may be added occasionally.

The sugar and butter are combined with water, and heated to 300 to 310 F (150 to 160 C — aka hard-crack stage.) Additional, optional items may be then added such as chocolate chunks, cream, nuts such as almonds, raisins, rum flavouring, etc. The hot Toffee mixture is usually then poured into a mould (such as a tray) and allowed to cool and set.

Sponge Toffee (aka Cinder Toffee, Honeycomb Toffee, hokey pokey) has vinegar and baking soda added to the mixture. This foams up the Toffee mixture with the carbon dioxide that is created, and makes a Toffee with holes in it.

Toffees made at high altitudes tend to be a bit lighter and a bit softer.

British Toffee tends to use brown sugar or molasses, for a richer flavour, and doesn’t have extra ingredients in it such as those listed above. It is just the base recipe, with no additional flavouring, not even vanilla. Nor is the set Toffee coated with things such as chocolate, etc.

American Toffee tends to use white sugar, may have coatings and / or additional ingredients, and it is more likely to be marketed as English Toffee.

But, if Toffee varies from its plain base, then it’s American Toffee, regardless of the marketing wording printed on the packaging.

A further difference between Taffy and Toffee is that Taffy is pulled; Toffee is poured into a mould.

High altitude: For every 1,000 feet (300 metres) that you are above sea level, subtract 2 degrees F (1 degree C) from the temperatures given in your candy recipe.

Some quality brands of Toffee may contain up to one-third real butter in them. Consequently, the makers will recommend that the Toffee be stored refrigerated, to prevent it from going rancid.

The word “Toffee” appears to have entered English in the early 1800s, possibly from Creole.