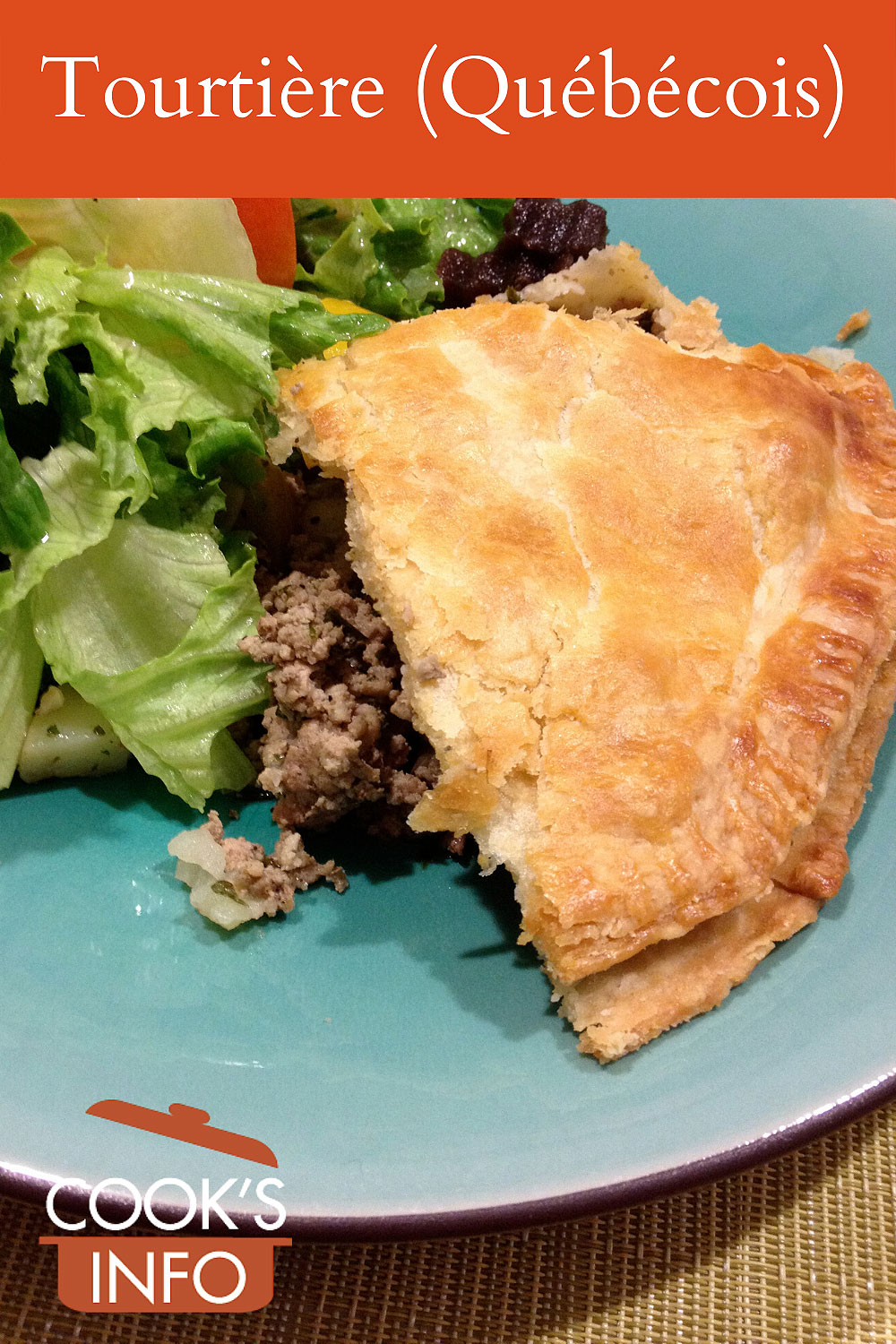 Tourtière as made in Quebec is a meat pie.

Spices used in the meat filling can include cinnamon, cloves, nutmeg, and allspice, accompanied by herbs such as summer savoury.

Despite the spicing, it’s really meant to be a quite a plain, home-style meat pie, so to add interest at the table, the pie is often served with a tart or zippy condiment such as a tomato ketchup, a homemade green relish sauce (particularly chow-chow), or pickled beets.

Tourtière is made at any time of the year, but is particularly traditional on Christmas Eve and New Year’s Eve.

There are two main categories of Québécois tourtière variations: deep-dish, and shallow. Given that Québec has a land mass three times greater than that of France, it is not surprising that several regional variations of tourtière evolved.

A shallow version of “tourtière” is made in the Saguenay-Lac-Saint-Jean region as well, though to them it is not tourtière — it is merely “meat pie” (“pâté — or “pâte” — à la viande”.) [1]”En vraie Saguenéenne, j’ai tendance à le prendre personnel lorsque les gens appellent un pâté à la viande, «une tourtière». ” Laforte, Marie-Ève. La vraie tourtière! Accessed May 2020 at https://www.canalvie.com/recettes/tourtiere-1.1596778

This type of tourtière is the most commonly found in Québec.

Shallow dish varieties of tourtière are baked in shallow pie dishes. The texture is generally denser. The meat is usually ground, usually pork though it may contain ground veal and / or ground beef as well.

The tourtière filling is made from ground pork, pork fat, ground beef, veal, and egg.

The tourtière filling is made from ground pork, seasoned with cinnamon and clove. The fat used in the crust traditionally was lard.

The tourtière filling is made from cubed duck simmered in chicken stock.

The tourtière filling is made from ground pork, ground beef, and potatoes, seasoned with dry mustard 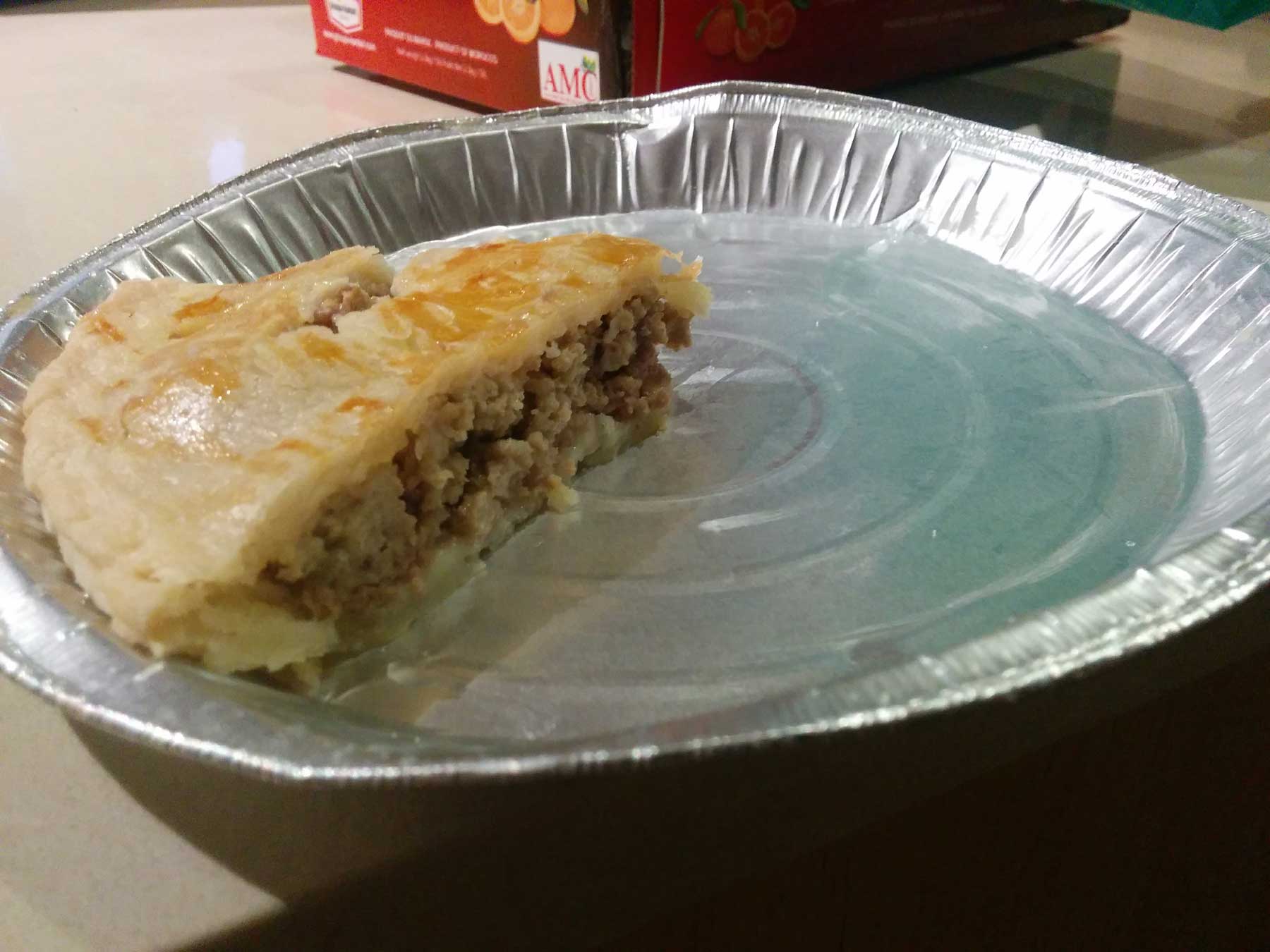 Today’s lean pork is a challenge for cooks, because it makes the tourtière filling drier, with less body, so cooks are trying to compensate with added ingredients such as actual pork fat (if they can get it), etc.

It’s a myth that tourtière is called tourtière because it used to be a pigeon pie.

In the twentieth-centruy, an urban myth, still prevalent, sprang up that tourtière got its name from having pigeon as the main ingredient. It may have been designed principally to startle tourists after their second mouthful.

“Tourterelle” is a generic broad name in French for the pigeon species. The passenger pigeon was extremely common as a game meat in North America, up until the latter 1800s, when the bird first became scarce and then extinct. In France, the bird was called “tourtre”; in Québécois French, the last “r” was dropped and the bird was called a “tourte.”

When available, the passenger pigeon almost certainly often was one of the many game meats included in the meat mixture — mixed with rabbit or deer or meats from domestic animals, depending on what the cook had available and what the cook’s preferences for flavour or secret ingredient was.

Named after a cooking vessel

The dish gets its name from the vessel it was cooked in, just as in English, casseroles are cooked in casseroles.

A tourtière in French is a word for an older type of cooking vessel not seen or used much anymore. A tourte is the dish, the recipe, cooked up in a a cooking vessel called a “tourtière”. Tourte is not a commonly used word anymore in France; nor, for that matter, is tourtière, because the cooking vessel is outmoded. (Exceptions include Tourtière Gascogne, which is an apple pie, and Tourtière Limousine, which is a meat pie.)

A tourtière cooking vessel was principally designed to cook relatively shallow food items that had a top and bottom crust. It was designed primarily with use on a hearth in mind.

This cooking vessel is usually round, 30 to 50 cm (12 to 20 inches) wide, with a flat bottom. The bottom may or may not have small feet on it for resting on a hearth. The sides are not very high. The vessel has a cover that has an indent in the top into which you might put hot coals for the heat, as you would with a genuine Dutch oven. Heat from the top and bottom then made it into a mini-oven.

Alternatively, a tourtière could be used in an actual oven, if one had one then. Baking ovens were a bit more prevalent in Québec than they were in France, as laws restricting their private construction did not come over or if they did, were not enforced in Québec. [2]”We should point out that we eliminated all possibility of the existence of seigneurial ovens by consulting authors who clearly state that this seigneurial right was never exercised in New France.” — Boily, Lise, and Jean-François Blanchette. 1979. The Bread Ovens of Quebec. Ottawa, Canada: National Museum of Man. Page 4. Rural, outside bread ovens are now a tourist attraction in some parts of Québec. Still, an oven was an expensive thing to build, and so they were a genuine luxury up until the 1900s.

As a side point, the shallow nature of the traditional tourtière cooking vessel could mean that the shallow dish varieties of tourtière are more authentic than the deep dish Lac-St-Jean variety. 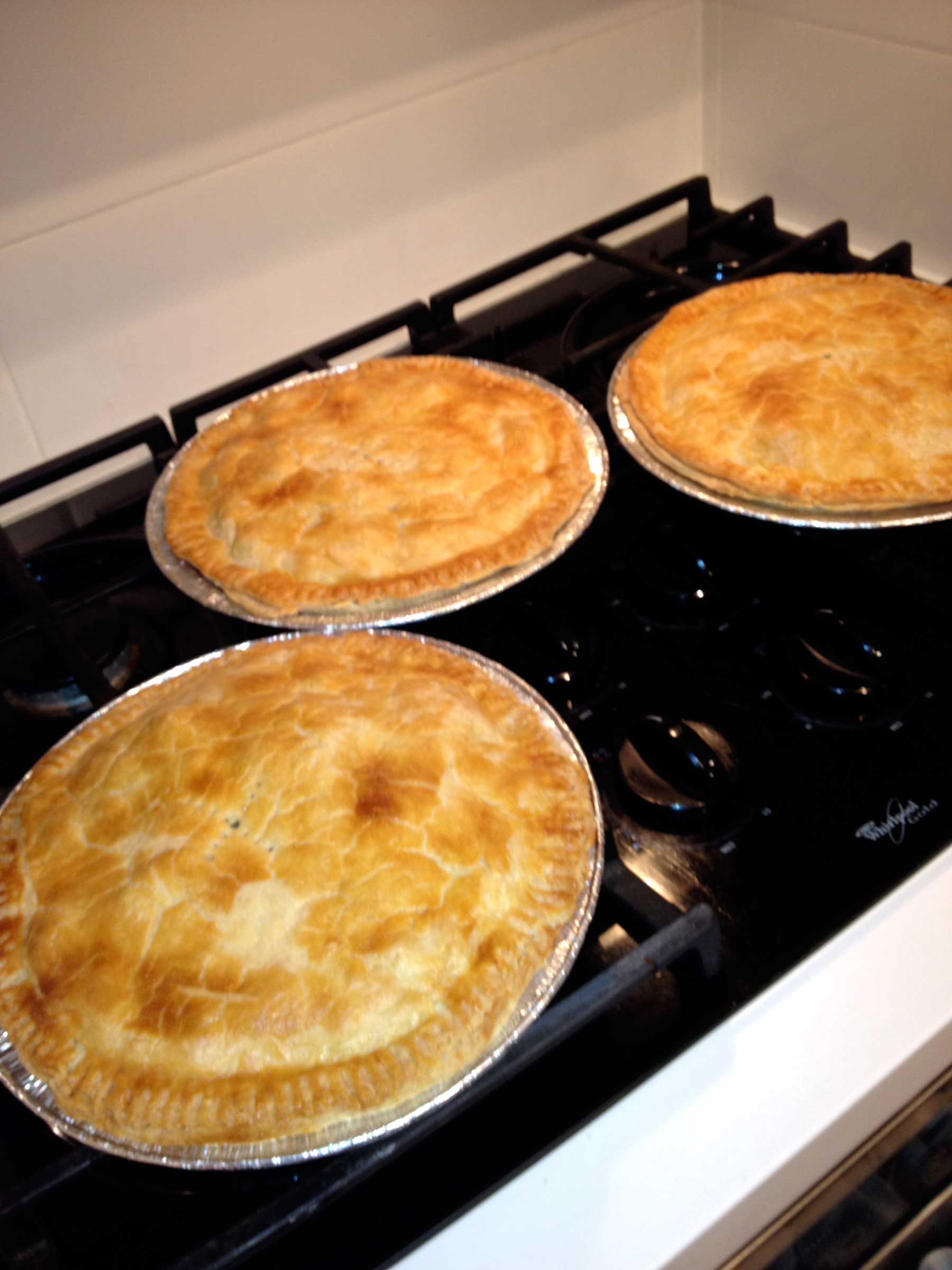