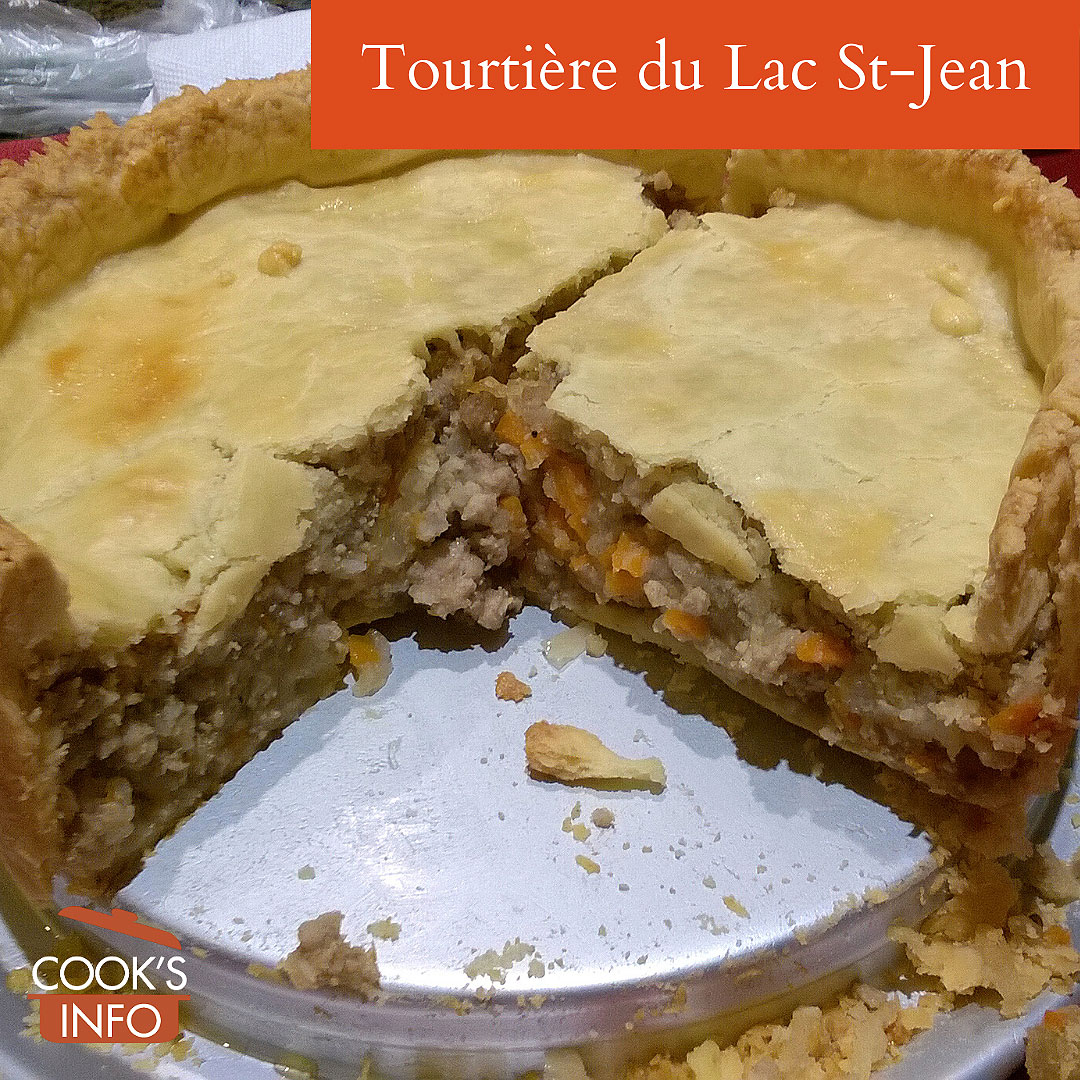 Known as “Tourtière du Lac-Saint-Jean” or “Tourtière Saguenéenne”, this version of tourtière as made in the the Saguenay–Lac-Saint-Jean region of Québec is a meat pie made in a deep casserole such as a Dutch oven, and consequently the pie turns out large enough that one will feed a good-sized crowd.

For other versions of tourtière made in Quebec, see Tourtière (Québécois) .

The meat for the filling can be beef and pork, sometimes with game such as hare, rabbit, partridge, moose or deer added. Other fowl such as chicken or turkey can be added as well.

The meat is diced into 1 – 2 cm (½ inch) cubes: butchers in the area will know how to prepare the meat like this when you tell them it is for tourtière. To the meat is added potato in the same size of cubes, as well as chopped onion. The ratio of potato to meat is 1 to 1. Additional vegetables such as celery and carrot may be used.

These ingredients are mixed, then seasoned. Spices used can include cinnamon, cloves, nutmeg, and allspice, accompanied by herbs such as summer savoury. The mixture is then covered in a bowl or pot and let sit overnight in the refrigerator for the flavours to marry. Most cooks emphasize that this resting period is critical for the seasoning to penetrate the meat. 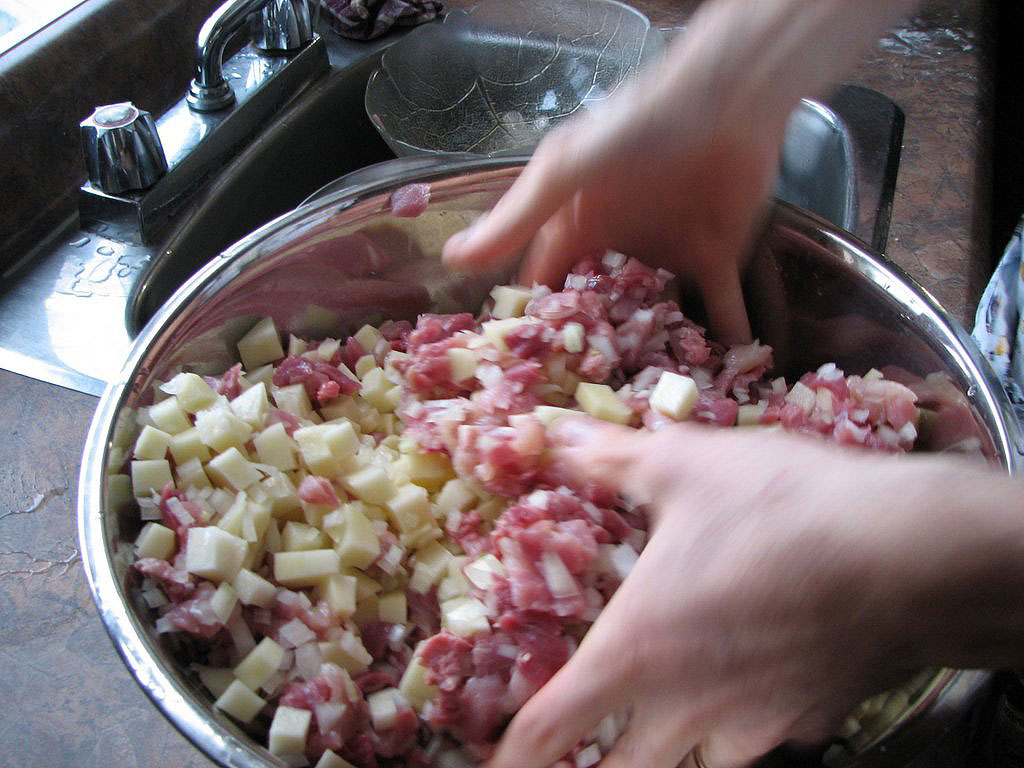 Many recipes omit the potato (and any poultry, if using) in the first step, and only add it after the overnight marination in the fridge. Some do not add the salt during the first step, either.

The next day, the next step varies. Occasionally you will see a recipe calling for the filling to be simmered in a pot on top of the stove before using it. Some of these variations calling for a simmered filling call for the potato not to have been added to the mixture until after it has been simmered. If you simmer it, you add a liquid such as water, or chicken or beef broth, just enough so that the liquid comes up level with the solid ingredients, and then simmer it to a thick stew consistency.

Most versions, however, do not seem to pre-cook the filing.

You then line with pie dough a deep casserole dish or pot, about the size of a Dutch oven, that has a cover. 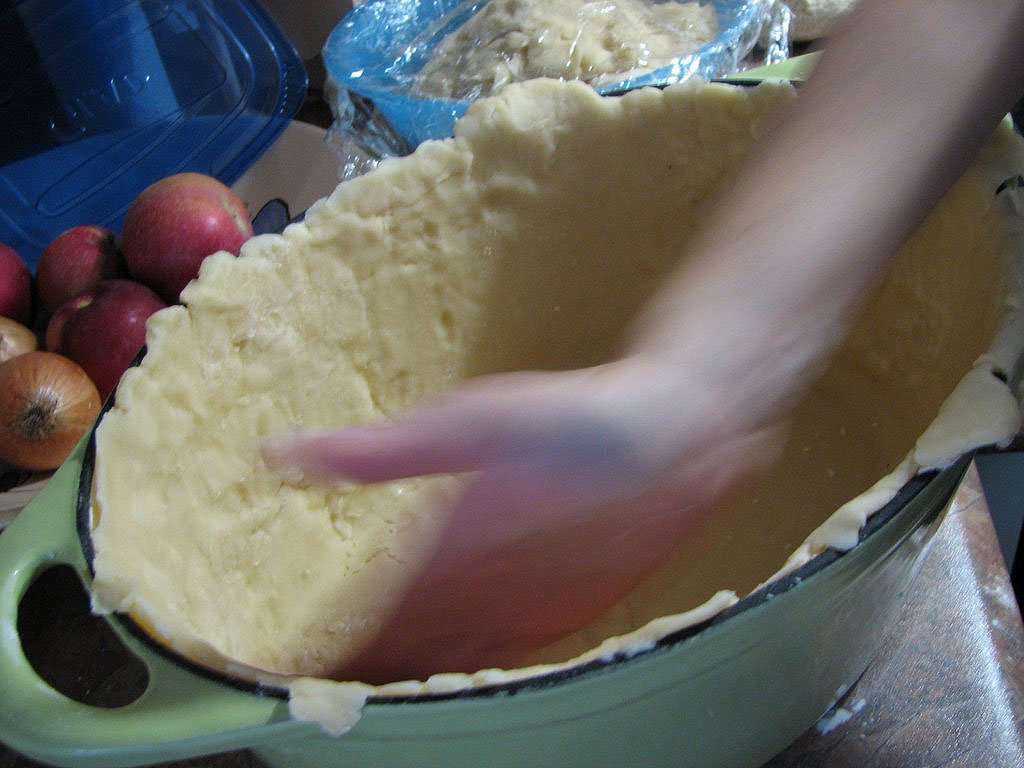 Then put your filling into the lined dish. Versions using the raw filling ingredients have you add some liquid or broth at this stage (typically, chicken broth is often called for.) You add enough broth to just cover the filling mixture. Any versions calling for a pre-cooked version just have you use the broth from the simmering. 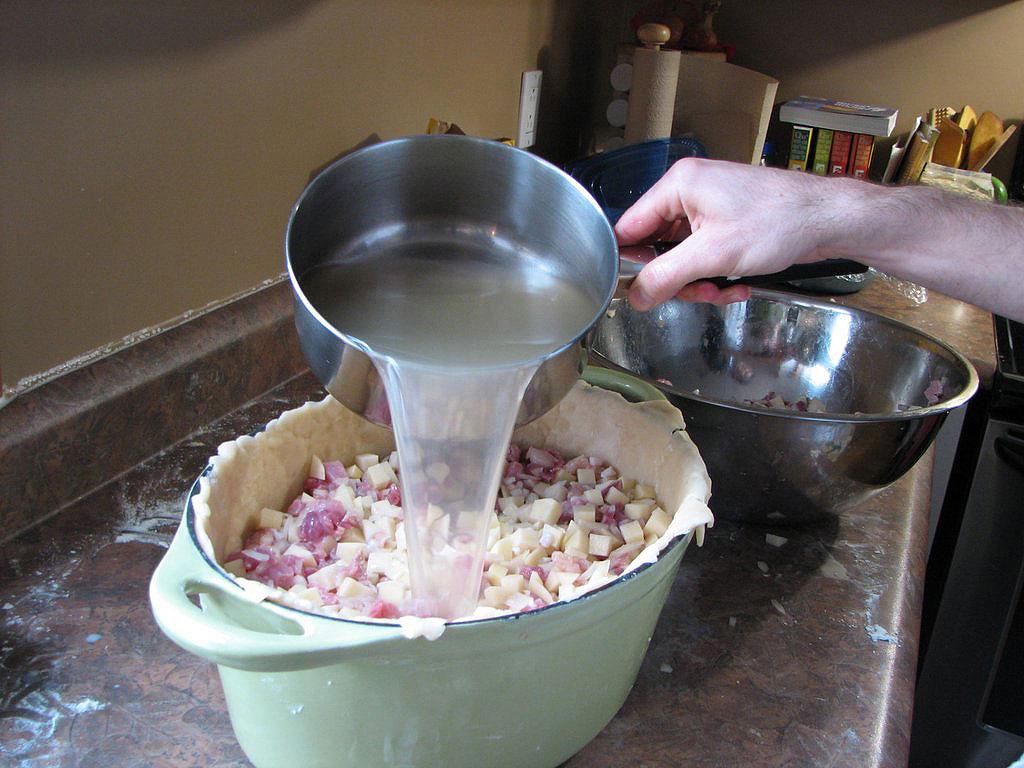 Top with a top layer of pie dough into which you poke holes to allow steam out. Cover the cooking vessel, and bake very slowly at about 135 to 160 C (275 F to 325 F.) The temperature called for is usually higher at first, then lowered for the remainder of cooking, with the cover removed in the last half or so hour to brown the crust. 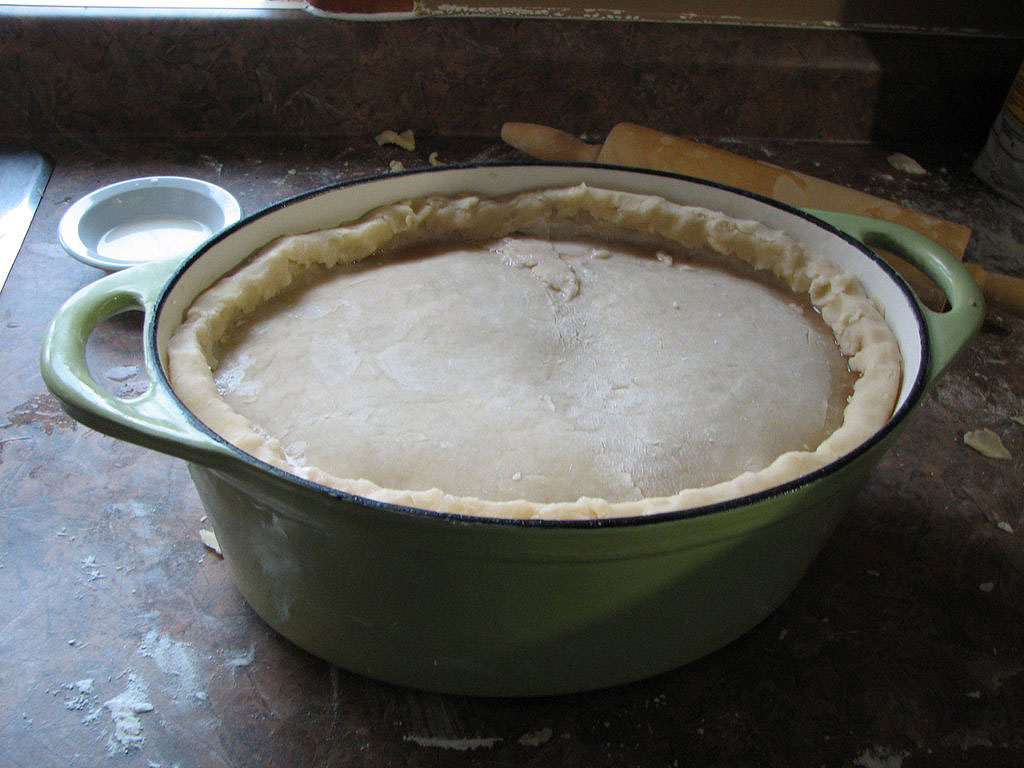 Baking time will be about 3 hours if the filling was cooked first; about 6 to 7 hours if not.

The Saguenay Lac-Saint-Jean was settled relatively late in Quebec’s history, not until the mid to late 1800s. The settlers primarily came from the Charlevoix region:

“The initial settlement of the Saguenay Lac-Saint-Jean (SLSJ) region occurred between 1838 and 1911. From a total of 28,656 settlers who moved there during that time, 75 percent originated from the neighbouring Charlevoix region.” [2]Paus, Tomáš and Pausova, Zdenka. Saguenay Youth Study. Accessed May 2020 at http://saguenay-youth-study.org/region-history-tourism/

There is no official definition; perhaps the closest is the attempt made by Quebec’s language department to define the term:

The language office adds that within this region, it’s just referred to as simply “tourtière”. It’s only just given descriptors, they note, when it’s being compared with versions of tourtière from other regions of Quebec.

“It is by semantic transfer (metonymy) that the term tourtière, which designates the container used for this dish, has come to designate its content. In context, the people of Saguenay, Lac-Saint-Jean and Charlevoix only talk to each other about “tourtière”; it is outside these regions that the dish must be designated with its determinant to distinguish it from the meat pie, also called pie in other regions of Quebec.” [5]Ibid.

This web site generates income from affiliated links and ads at no cost to you to fund continued research · Information on this site is Copyright © 2023· Feel free to cite correctly, but copying whole pages for your website is content theft and will be DCMA'd.
Tagged With: Québécois Food