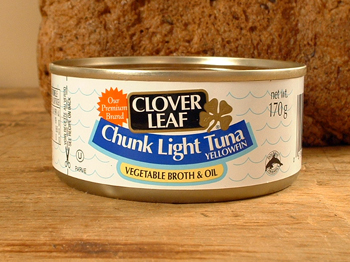 Contents hide
Canned tuna accounts for about 99% of tuna eaten; only about 1% is sold fresh. Tuna is a fish that even people who don’t generally like fish will eat, owing to its not tasting fishy.

In 2001, the top 3 tinned-tuna consuming countries in Europe were the UK, France and Germany, in that order.

Tuna sold in France comes from Africa and the Indian ocean. France has traditionally imported the tuna and canned it in France, but at the end of the 1900s a trend began to can it closer to where the fish is being caught to take advantage of lower production costs outside the EU. Germany imports most of its tinned tuna from France.

Whether fresh, or frozen then thawed, raw tuna turns a brown colour that is not appealing to consumers. The brown colour — called “chocolate” in the tuna industry — does not mean that the tuna is not fresh, but just as for beef, consumers look in raw tuna for a red colour to indicate freshness. They don’t want to buy browned raw tuna. Consequently, much fresh tuna today is sprayed with carbon monoxide to stop the tuna from browning. The carbon monoxide does nothing to preserve quality of the fish, just the colour. The spray can even make tuna that has gone brown go back to red. Treated fish will stay reddish for a few days, then fade to a pink, but it won’t ever brown after that, even when the fish has gone bad. Consequently, though the process is safe and carbon monoxide is harmless (unless breathed, of course), the process is banned in Canada, Japan and the EU because it could be used to disguise fish that has gone off. It is still legal in America.

As carbon dioxide is sometimes derived from wood smoke, on the packaging of treated frozen tuna you may see “treated with wood smoke” or just “wood smoke” as an ingredient.

When buying fresh tuna, avoid tuna that is displayed on ice as the ice draws out the flavour of the fish.

Albacore tuna, which is white tuna, is considered more desirable owing to its milder taste and is consequently more expensive.

Bluefin tuna is said to be better for barbequing, as it has more fat, and so stays moister on the grill.

Bluefin flesh is dark red, almost like meat, and is very popular in Japan.

Skipjack is the tuna that you usually find canned.

People who like fish often prefer Yellowfin, whose flesh is a pale pink with a stronger taste.

After opening tinned or pouched tuna, store any remainders in a sealed container in the fridge for up to 4 days, or freeze it.

Nutritionists look to some fish as a rich source of long-chain omega-3 fatty acids, particularly blue fish (aka oily fish). The UK government does not consider tuna, however, to be an oily fish, and so it does not count as part of its nutritional intake recommendations in that particular regard:

This applies whether or not the tinned tuna is packed in oil.

Registered dietitian Leslie Beck, writing in 2022, still feels, however, that there is an omega benefit as far as albacore tuna goes:

“Whether it’s white (albacore) or light (skipjack, yellowfin, tongol), canned tuna is an excellent source of protein, niacin, vitamin B12 and selenium, a mineral that plays a critical role in healthy thyroid function. But if you’re also looking for anti-inflammatory omega-3 fats, albacore tuna is the better choice. Three ounces provide 860 mg of eicosapentaenoic acid (EPA) and docosahexaenoic acid (DHA) combined, three times more than light tuna.” [2]Beck, Leslie. Test your nutrition smarts: Which of these foods packs the most nutritional heft? Toronto, Canada: The Globe and Mail. 30 May 2022. Accessed May 2022 at https://www.theglobeandmail.com/life/health-and-fitness/article-test-your-nutrition-smarts-which-of-these-foods-packs-the-most

Tuna has been fished by Pacific peoples for millennia. In the Mediterranean, tuna has been a part of their diet since the Greeks and Romans.

Not much tuna was eaten by the English-speaking world, however, prior to the 1910s. Fishing for albacore tuna to be sold fresh began off the coast of southern California in the late 1800s.

Tuna really only became available, however, with the advent of canned tuna. Canning turned out to be an ideal way of preserving tuna and to reach inland markets. A tuna canning factory was established in Olhão, Portugal in 1882. By the 1880s, the US was importing canned tuna from France. In 1903, a trial of canned albacore in California proved successful and the American canned tuna industry took off. Demand led to the canning of skipjack, bluefin and yellowfin in America by the 1920s.

In America, in the 1920s, tinned tuna was considerably more expensive than salmon:

Tuna is the god of eels in Polynesian mythology.

“You can tune a piano, but you can’t tuna fish.”

The word “tuna”, it’s thought, was coined by Spanish Americans, with its origins in the Latin word for tuna, “thunnus”. How is not exactly sure, given that the Spanish in Central America use the word “tuna” to mean cactus fruit, and “atún” for the fish. The English word for tuna had been “tunny” (sic). “Tuna” begins appearing in print in English around about the early 1880s, and twenty years later, by the early 1900s, seems to have replaced the word “tunny” altogether.

Tuna is called “maguro” in Japanese.