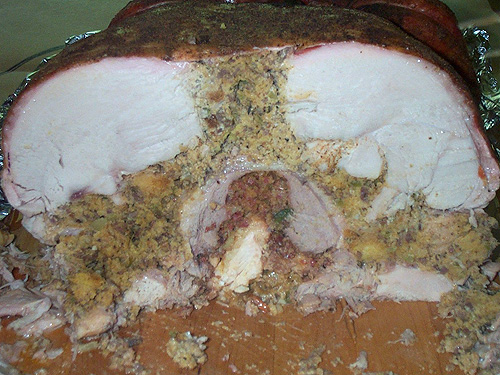 Turducken is considered a novelty or an extravagance still, and may always be owing to the assembly work involved.

Some people, on seeing the word for the first time, are a bit startled at the thought of a food beginning with those four first letters until their eyes learn how to parse the word.

Some people consider Turducken the epitome of American excess. It is, however, simply a revival of the very Medieval practice to stuff one animal inside another to surprise and delight diners.

You can make your own Turducken Roll, though it is a lot of work. First, the birds must be boned. You can try buying the birds from a butcher and asking the butcher to de-bone the birds for you. If you are reduced to doing your own deboning, remember that deboning one bird, let alone, three, is very time-consuming to do, and requires deboning practice in advance. If you do debone your own birds, remember to keep any bird that you are not currently working on in the fridge.

American chef Paul Prudhomme provides very long instructions on his website for preparing Turducken Roll, including three different stuffings for you to make that go inside.

You can purchase Turducken Rolls already prepared, either plain, or with stuffing such as Shrimp & Crawfish, Cornbread and Creole Pork, etc. If you’re purchasing one, be sure to get your order in well in advance.

If you are buying the birds already boned and just assembling the roll yourself, allow for 1 hour assembly time including making 1 stuffing.

This is a smaller version of Turducken. It is made of three layers of meat — boneless butterflied turkey breast, duck breast and chicken breast, in that order — with dressing between each layer, then rolled up, It is easier to make yourself at home than a full-fledged Turducken. It also takes less time to cook, about 1 1/2 hours.

Commercial rolls may be bound with string netting.

Wrap in aluminum foil to cook until the end, then remove foil to brown a bit,

If you purchased a Turducken Roll frozen, thaw it first before cooking. Allow 2 to 3 days for a 15 pound (7 kg) one to thaw in the refrigerator.

Alternatively, Turducken can be smoked or cooked on a barbeque grill, but not deep-fried.

To carve, let rest covered for half an hour. Remove the string. Then, first slice completely in half lengthwise, to make two long halves. Then, slice across each half. 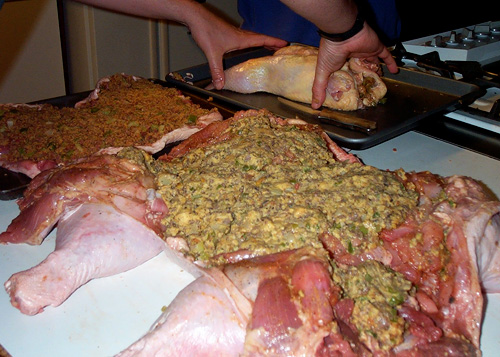 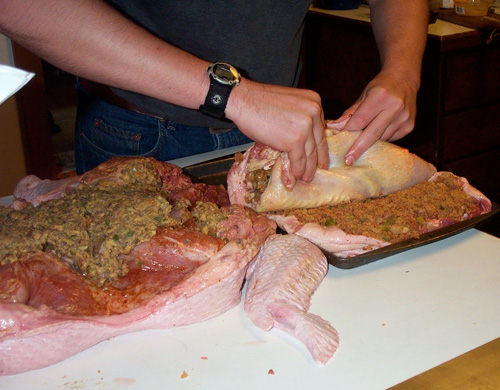 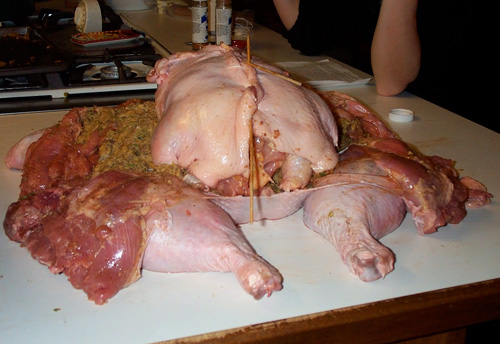 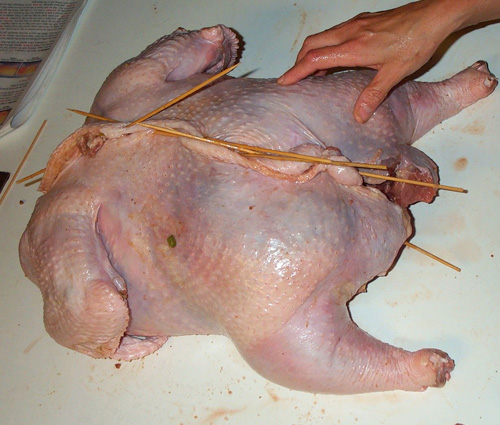 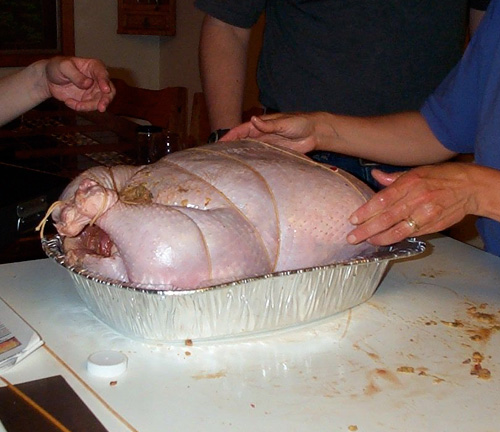 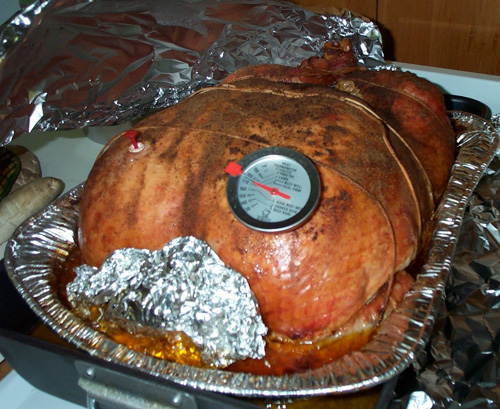 Turducken roll out of the oven
© Michelle Mattern 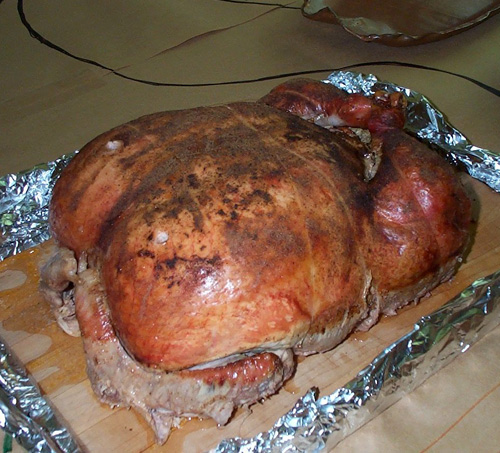 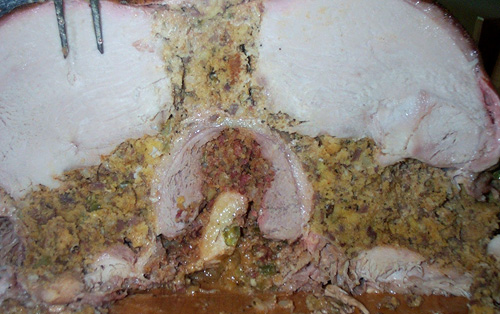 It is is possible, though, that it may have been inspired by a product that appeared in the 1950s: “Tur-King is a new kind of turkey, a 9-pound roll of boned, uncooked turkey meat, light and dark, all the meat that’s usable on a 19- to 20-pound bird, wrapped in heavy aluminum foil, pressed into log form, and frozen. Tur-King is being packaged now in 2 ¼-pound logs for home use to sell through the frozen-food markets. It is processed and packed by Farmers’ Produce Company of Willmar, Minnesota, for the Norbest Turkey Growers’ Association of Salt Lake City.” — Paddleford, Clementine (1898 – 1967). Food Flashes Column. Gourmet Magazine. May 1950.s

“From the bayou country that gave birth to jambalaya, etouffee and various blackened delicacies comes a holiday hybrid of birds – a triple play of festive fowl that Mother Nature never intended. Behold the turducken… Turduckens are growing in popularity, and there are assembly instructions and recipes on the Internet, including the Web site of the tri-bird’s apparent father, Cajun chef Paul Prudhomme, who says he made his first one in the 1960s. But the deboning is treacherous and assembly complicated, so most consumers opt for buying them already prepared.”

This web site generates income from affiliated links and ads at no cost to you to fund continued research · Information on this site is Copyright © 2022· Feel free to cite correctly, but copying whole pages for your website is content theft and will be DCMA'd.
Tagged With: American Food, Chicken, Creole Food, Duck, Poultry, Turkeys