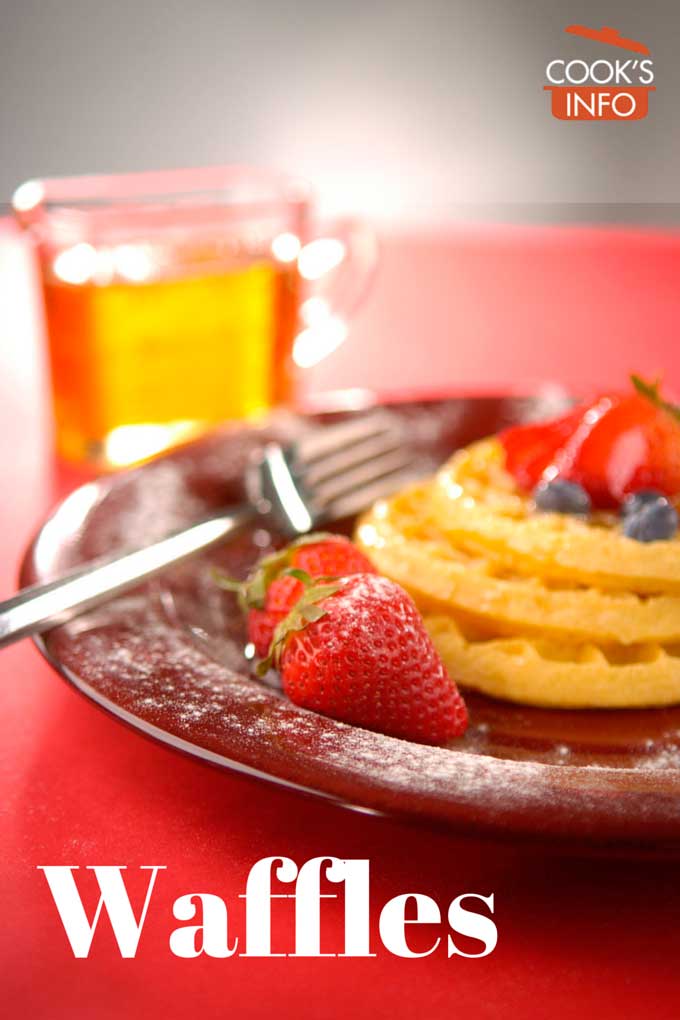 Waffles are quick breads that are baked in special griddles that fry them on the outside, and steam them inside. A Maillard reaction occurs on the exterior of them as they brown, giving them their flavour. They come out crisp and browned.

Waffles have a honeycomb pattern with ridges and indents created by a special cooking tool called a “waffle iron.”

Some food writers have called them “edible architecture.”

Though there are savoury versions of waffles, served with meat and / or vegetables in sauces, they are generally served for breakfast, brunch and desserts with sweet toppings. A classic waffle topping in North America is whipped cream and strawberries. Waffles lose their heat quickly once off the waffle iron, so it is best if toppings such as butter, whipped cream, jams, etc are at room temperature.

For fluffy waffles, recipes will call for the addition of either baking powder or beaten egg white, or both. Some feel that using baking powder can result in a thin, somewhat bitter batter. Some feel that nothing beats the combination of baking soda and buttermilk for rising and taste. Neither leavener, though, will produce ones as light as those risen with yeast.

Pour the batter into the centre of a waffle iron (some recommend making an X shape as you pour.) The batter will get evened out when the top is closed. Steam will come out of the iron as the Waffle cooks. Generally, in 2 to 4 minutes, the steam will diminish greatly.

To get crisper waffles, cook them longer or pour less batter into the iron to make them thinner.

To keep a large quantity of waffles warm while making more, place them in an oven-safe pan, cover with a moist towel to stop them from drying out, and place in an oven that has been heated to 60 C (140 F.) They are best spread out, such as you can do on a cookie sheet, as they can soften if stacked.

You can buy frozen waffles that you re-heat in your toaster.

To freeze waffles, just slightly undercook them, stack them on a wire rack to cool, then package and freeze. To use, put them straight from the freezer into your toaster (provided they fit), and toast (don’t even try a microwave oven, they will come out horrible.)

Waffles have been made since at least the 1300s. They were originally made for the wealthy, in special coat of arms moulds, etc. They were treated exclusively as a savoury dish (well, as exclusively as could be at a time when there was no distinction between savoury and sweet,) and were often served with cheese.

The Dutch have been making waffles since at least the 1600s. They brought the concept with them to New York, USA. Some also say that the Pilgrims, who stopped off in the Netherlands on their way to the New World, may have come into contact with waffles there as well.

This web site generates income from affiliated links and ads at no cost to you to fund continued research · Information on this site is Copyright © 2022· Feel free to cite correctly, but copying whole pages for your website is content theft and will be DCMA'd.
Tagged With: Breakfast