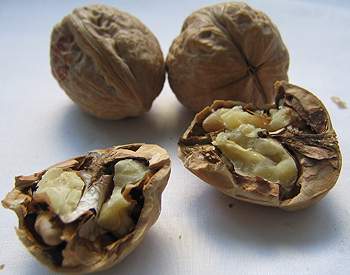 The roots of Walnut trees give off a substance into the soil that make it very hard for other plants to grow near the tree. The Roman writer, Pliny, liked Walnuts well enough, but thought for this reason that they were a nuisance wherever they were planted.

Walnuts are harvested in the fall. Black Walnuts have a more pronounced taste than English Walnuts, but are very hard to crack. For this reason, they are almost always sold shelled, to make consumers’ lives easier. Black Walnuts also have a higher fat content, which while it makes the taste more satisfying, makes them prone to turn rancid more quickly.

When buying Walnuts, any that rattle are old and dried up inside.

Fresh Walnuts right off the tree actually are in a husk. These husks need to be removed shortly after picking — make a slit all around the husk, then pry it off. Under the husk you will see the shell, inside of which is the nut.

English Walnuts can be cracked with a nutcracker. If you still have a nutpick kicking around in your kitchen drawers, recalcitrant chunks that don’t want to come out can easily be pried out. Black Walnuts are a bit more of a challenge: some people go so far as to try a sledge-hammer or running over them with their car (they recommend putting them on a sheet of plastic first so that they don’t stain your driveway.) A regular hammer should do it, actually, but mind your eyes and take precautions against flying bits of shell. Soaking them overnight first in salted water will help them to crack more easily.

Once the nuts have been shelled, or if you were clever enough to buy them already shelled, you can chop them by hand, or in a food processor. If you get home from the store and realize that you bought chopped Walnuts instead of ground Walnuts, and you need ground, you can whiz them through a food mill or a food processor. Or, you can put them between two pieces of wax paper and get to work with a rolling pin.

If you think your Walnuts are old and don’t smell of anything, you can restore the scent and flavour by toasting them a bit to release the oils.

Put the walnuts into a skillet that has been heated over medium to high heat, and stir the nuts for a minute or two. Don’t leave them, and don’t leave them longer, or you will move from toasted nuts to burnt offerings. Immediately afterwards, tip them onto a plate; don’t leave them in the pan. Even if you remove the pan from the heat, the pan will still be hot enough to push your toasted Walnuts over the edge. (Or, toast on a cookie sheet for 10 minutes in a 350 F / 175 C oven.)

Contain zinc, potassium, magnesium, iron, folic acid and vitamins B1, B2, B3, B5 and B6. Are very high in anti-oxidants.

3 tablespoon of Walnuts can provide daily requirement of Omega 3 fatty acids (making them one of the very few plant sources that can).

Walnuts have a large amount of oil in them; they will spoil if this oil is allowed to go rancid.

Unshelled nuts can be kept for 6 to 8 months in a cool place such as a cellar. Shelled nuts should be kept in refrigerator in a sealed container or bag for up to 4 months. Or, freeze for up to one year, and use as needed.

The English Walnut actually originated in Persia or Iraq. It was carried throughout the world by the English, thus its name now. The Hanging Gardens of Babylon (2000 BC) had Walnut groves. There’s evidence that we were using Walnuts as food as early as 7000 BC. In Persia, only royalty were allowed to eat Walnuts. The Greeks were making Walnut oil in 300 BC. 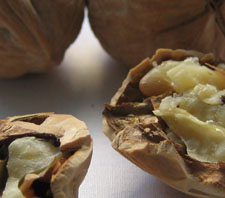 Unshelled Walnuts have been found on tables in Pompeii. The grooms at Roman weddings would throw Walnuts to their guests. Sometimes Walnuts were thrown back at them; Romans thought Walnuts promoted fertility.

Walnut wood was one of the more highly prized woods for furniture, until mahogany imports began. The husks and hulls of Walnuts were used to make walnut stain for furniture, hair dye, brown ink, and dyes for wools.

The English word “walnut” may have come from the German word, “Wallnuss”.

It was believed that if a witch were seated and you dropped a Walnut into her lap, she wouldn’t be able to get up until you removed the Walnut. Witches were supposed to hold their meetings at night under Walnut trees (pear trees were also presumed to be a favourite meeting place).

Juglans Regia is the English (Persian) walnut; Juglans Nigra is the Black Walnut.

This web site generates income from affiliated links and ads at no cost to you to fund continued research · Information on this site is Copyright © 2023· Feel free to cite correctly, but copying whole pages for your website is content theft and will be DCMA'd.
Tagged With: Ancient Greece, Walnuts