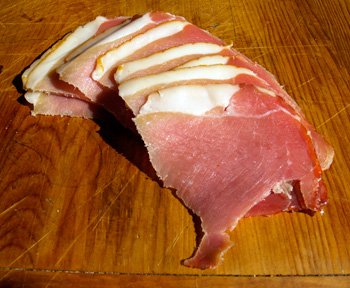 Westphalian Ham is made from the hind leg of pigs allowed to graze on acorns in the Westphalia (Westfalen) forest in Prussia, Germany.

The meat is rindless and bright pink, with a mild smoked flavour. An unsmoked version is now also made.

To make the ham, the meat is allowed to stand with a salt cure for 5 weeks, then for 4 to 5 weeks cold-smoked from smoke from a fire of beechwood and juniper.

If the ham is going to be sold boneless, the bone is removed when the total processing time is between 2 to 3 months.

The ham is aged for about 6 months in total.

The ham does not need cooking.

Versions of the same name are also being made by producers in North America. An association, “Schutzgemeinschaft westfälische Schinken & Wurstspezialitäten e.V.” was formed in 2004 to apply to the EU for recognition and protection of the ham.

“To the Privy Seal, and sealed; so home at noon, and there took my wife by coach to my uncle Fenner’s, where there was both at his house and the Sessions, great deal of company, but poor entertainment, which I wonder at; and the house so hot, that my uncle Wight, my father and I were fain to go out, and stay at an alehouse awhile to cool ourselves. Then back again and to church, my father’s family being all in mourning, doing him the greatest honour, the world believing that he did give us it: so to church, and staid out the sermon, and then with my aunt Wight, my wife, and Pall and I to her house by coach, and there staid and supped upon a Westphalia ham, and so home and to bed.” — Samuel Pepys. The Diary of Samuel Pepys. Thursday, 22 August 1661

“Friend Bradley, Thy Favour of the 30th ult. I receiv’d; in Answer to which, I send thee the Method used to cure Bacon in and about Hamburgh and Westphalia, which is after this Manner: Families that kill one, two, or three Hogs a Year, have a Closet in the Garret joyning to their Chimney, made very tight and close, to contain Smoke, in which they hang their Bacon to dry out of the Reach of the Heat of the Fire, that it may be gradually dried by the Smoke only, and not by Heat; the Smoke is convey’d into the Closet by a Hole in the Chimney near the Floor, and a Place made for an Iron Stopper to be thrust into the Funnel of the Chimney about one Foot above the Hole, to stop the Smoke from ascending up the Chimney, and force it through the Hole into the Closet. The Smoke is carried off again by another Hole in the Funnel of the Chimney above the said Stopper, almost at the Ceiling, where it vents itself. The upper Hole must not be too big, because the Closet must be always full of Smoke, and that from Wood Fires; for Coal, or Turf, or Peat Smoke, I apprehend will not do so well.

“The Manner of Salting is no other than as we salt Meat in common; sometimes they use our Newcastle Salt, or St. Ubes, or Lisbon Salt, and a Salt that’s made at Nuremberg (not so good as Newcastle) made from Salt Springs; in those Parts they do not salt their Bacon or Beef so much as we do in England, because the Smoke helps to Cure, as well as the Salt; for I have seen when dry’d Flesh hath no hang’d long enough in the Smoke, it would be green within, when if it had hung its Time, it would have been red quite through; for as the Smoke penetrates, it cures the Flesh, and colours it red without any Salt-Petre, or any other Art.

“As to the Feed of their Swine, I saw no difference between their Feed and ours here; if any have the Preference, I believe the English, and our Bacon would be full as good, if not better than the Westphalia, if cured alike.” — John Warner (of Rotherhithe, London) to Richard Bradley (c.1688 to 1732). 1721. In “Bradley, Richard. A general treatise of husbandry and gardening. London: Printed for T. Woodward,and J. Peele, 1726.

“To make Hams of Pork like Westphalia: — To two large hams, or three small ones, take three pounds of common salt, and two pounds and half of brown coarse sugar; mix both together, and rub it well into the hams, and let them lie seven days, turning them every day, and rub the salt in them, when you turn them; then take four ounces of salt-petre beat small, and mix with two handfuls of common salt, and rub that well in your hams, and let them lie a fortnight longer: then hang them up high in a chimney to smoke.” — William Carew Hazlitt (1834 to 1913). Old Cookery Books and Ancient Cuisine. London: The Book-Lover’s Library. 1902.

This web site generates income from affiliated links and ads at no cost to you to fund continued research · Information on this site is Copyright © 2022· Feel free to cite correctly, but copying whole pages for your website is content theft and will be DCMA'd.
Tagged With: German Food, German Hams