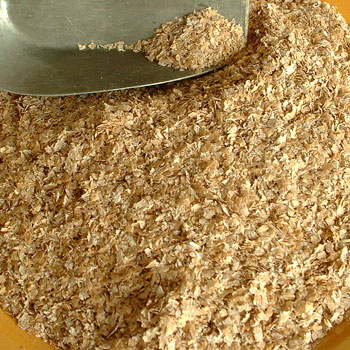 Bran is the portion of the grain immediately under the husk of the wheat kernel; it covers the entire kernel. Mostly, people add Wheat Bran to recipes that use flour to add nutritional punch in making items such as pancakes, muffins, and breads. A few tablespoons at a time should do it, but you can substitute up to 1/3 of the flour for Wheat Bran in many recipes.

While there are other types of bran such as oat bran, if a recipe doesn’t specify, it means “wheat” bran.

When adding bran to a bread recipe, soak the bran first in some of the liquid from the recipe for 15 to 30 minutes before adding it and kneading. This softens the bran, making it less abrasive and less likely to cut through the gluten (which would make the bread rise less.)

Store in the refrigerator or freezer to keep it from going rancid.