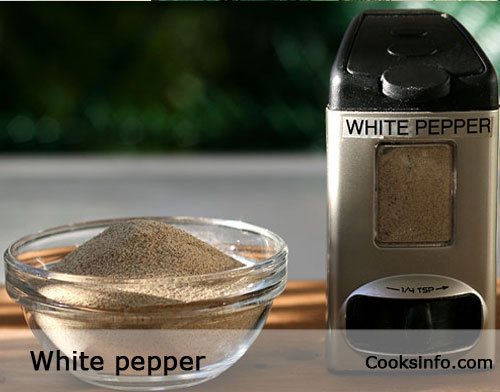 White Pepper is made from ground white peppercorns.

Though it is not as pungent or spicy as the Black Peppercorns because the outer hull has been removed, it’s because of that pungency being diminished that more of their wine-like aroma comes through.

White Ground Pepper is currently considered old-fashioned for home use, though it may be experiencing the first frissons of a revival.

Professional cooks seem to prefer the subtler flavour of white pepper: it gets used in professional kitchens about twelve times more than does black pepper.

White Pepper is very useful in “white” or light-coloured dishes in which you don’t want black stuff looking like fly-specks, and White Pepper is perfect for that. It is also better than black pepper at enhancing other tastes without competing with them.