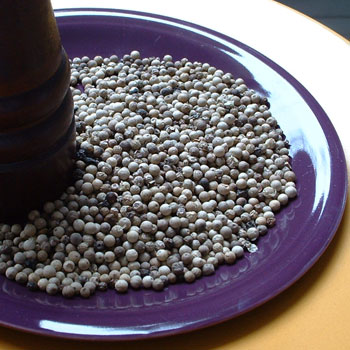 White Peppercorns come from the same vine as do Black, Green and Red Peppercorns; they are just processed differently.

In the next stage which makes them white, the outer shell, whether it is red or black, is removed either by soaking them in water until they loosen, or by running water, to leave just the white core. Then they are rubbed to remove any final trace of coloured shell, and dried in the sun.

They can be sold as is, or ground into ground white pepper.