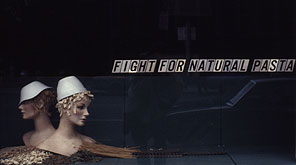 Whenever you read about Whole Wheat Pasta, the first two items the writer will always mention are its nutritional value and then its “nutty flavour.” Nutrition at the top of the list should already make you suspicious why taste isn’t being mentioned first, and anything that is bland or uninteresting always seems to be described as having a “nutty flavour.”

Whole Wheat Pasta won’t cook up as firm as regular pasta does, either. The Whole Wheat flour is coarser and the dough doesn’t develop as much gluten to bind it all together (the bran cuts through the gluten), so it absorbs more water as it cooks.

And, the flavour of Whole Wheat Pastas just doesn’t work well with tomato sauces, which is what most people like on pastas.

But, the flavour is really good with cream sauces, sauces with anchovies in them, or tossed with oil, parsley, fresh mushrooms and capers.

In fact, the only reason to buy Whole Wheat Pasta is because you like the flavour with such sauces.

Whole Wheat Pasta is tan coloured and comes in many shapes.

While most pasta cooks up tender to the bite in 10 to 12 minutes, because whole wheat pasta tends to cook up soft anyway, aim for the lowish end of that, and check it at 9 minutes, being prepared to drain it pronto at 10 minutes.

Refined flour, which pasta is generally made from, loses a good deal of its nutrition, especially the B vitamins during the refining. This would give Whole Wheat Pasta a definite leg up, nutritionally. However, government laws in North America and in the UK require that most of the nutrition that was refined away be restored, particularly the B vitamins. If you look at a package of pasta, chances are it says made from “enriched flour”, which means it’s basically back on an equal nutrition footing with Whole Wheat Flour.

Now, comes time to boil your pasta, regular or wholewheat, and what happens, particularly to the B vitamins? Most of them are destroyed anyway in both kinds of pasta.

Where Whole Wheat Pasta maintains an advantage is that it has more dietary fibre than is in the enriched pasta flour and which isn’t restored in the enriching, and that can matter to you if your body isn’t getting 45 to 60 grams a day. If it already is, then the fibre in wholewheat is really neither here nor there to you. And yes, Whole Wheat Pasta has a few other trace minerals and vitamins than regular pasta does, but not in any significant amounts.

So buy it for the taste, but not for nutrition.

Store in sealed container or bag for up to 6 months in cool place. If you store it in a warm place, say top of a cupboard at the height of summer, it may go rancid on you within a month.