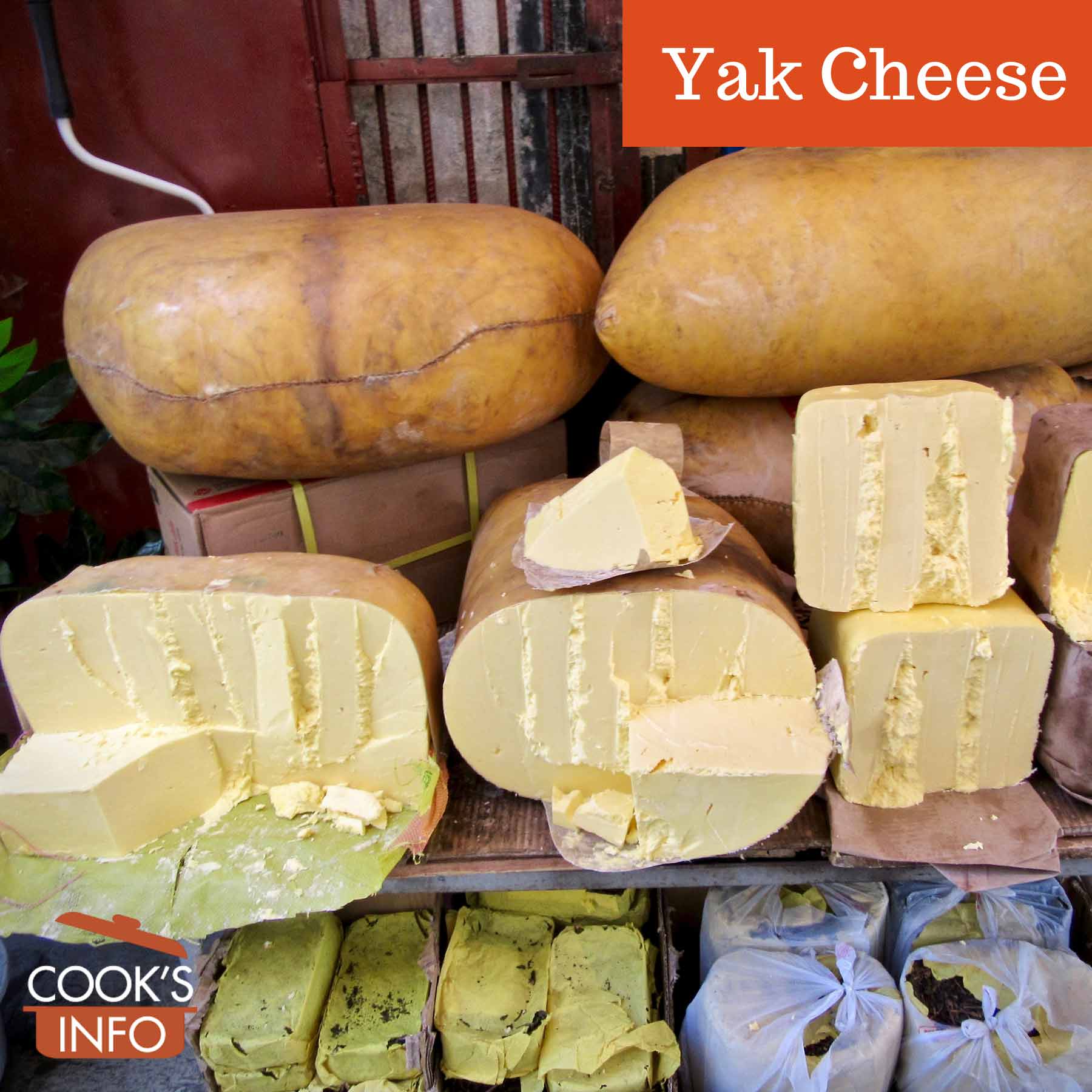 Yak cheese is a category of cheeses made from the milk of animals called yaks. Using their milk to make what Westerners call cheese is a recent historical development.

Yak milk (actually “dri” milk — female Yak are called “dri” in Tibet; “nak” in Nepal) has a good fat content for cheese of about 7% (milk from cows ranges from 3% to 4%), though a single dri will only produce as much milk as a goat. The milk used for Western-style cheeses can be either dri milk, or milk from chauri (hybrids between yaks and cows.) In Tibet, dairy products can only be made from May to September, while there is enough grass for the yaks to eat to produce milk.

Yak cheese made in Nepal has half the butterfat skimmed off the milk to make a harder-style cheese, which is then soaked in brine and cured outdoors in shelters. The cheese ends up grainy and tangy. Rajya Metok Cheese in Tibet was developed partly as an effort to produce a higher-quality yak cheese.

A product made for export to the West

Though Tibetans and the Nepalese were historically amongst the few Asians to make use of dairy products at all, they didn’t make cheese as we know it and they still don’t have much taste for Western-style cheeses. The cheeses now being made from yak’s milk are just for export to Western markets, where they sell as novelty cheeses and command high prices.

While the sale of yak cheese to the West has increased household incomes in the Himalayas, some in the FAO have expressed concern that with so much milk now being diverted to this more profitable venture of flowing milk to the West as cheese, yak calves are being deprived of milk and suffering a higher infant mortality rate.

Yak cheese is also being made now in Bhutan, India, Mongolia, Pakistan and Tibet for export to the West.

In 2008, a team of researchers led by a Professor Brian McBride from the University of Guelph in Ontario, Canada, concluded that yak cheese had three times more beneficial omega-3 fatty acids than did cheddar cheese. The researchers noted, though, that the dietary differences between yaks and farm cows may be the explanation: “The results suggest that cheese from yak, grazed on Himalayan alpine pastures, may have a more healthful fatty acid composition compared to cheese manufactured from dairy cattle fed grain-based diets.” [1]Hitti, Miranda. Cheese From Grass-Fed Yaks May Have Better Fatty Acid Profile Than Cheese From Grain-Fed Cows, Study Shows. WebMD Health News. 14 March 2008.

The food researcher Harold McGee says such findings should be put into perspective:

“The yak cheese story echoes similar claims made for grass-fed beef. The body fat or milk fat of animals that feed on grass contains three or four times more essential omega-3 fatty acids than beef from cattle fattened on grain. Which sounds impressive — except that the actual quantities are still small. Unwind with an oyster shooter, snack on a few toasted walnuts, dress some greens, organic or conventional, with a little canola oil, and you’ll get far more omega-3s than you would from a grass-fed steak or hunk of yak cheese.” [2]McGee, Harold. Let’s Take a Closer Look at That Study on Yak Cheese. New York Times. 7 May 2008.

Nepal was the first country in Asia to make any Western-style cheeses, and until the 1980s certainly the only Asian country making yak cheese (as we would use the word cheese.) In 1952, in an effort to help people in Nepal earn cash incomes, the Food and Agriculture Organization of the United Nations (FAO) taught dairy processors in Nepal how to make Swiss-style hard cheeses. [3]”The Swiss developed appropriate technology to produce cheese in the Alps Mountain. Later on, this technology was transferred to Nepal through FAO technical assistance in 1952. Thus, first yak cheese plant was established in Langtang valley. This dates back to first historic yak cheese production in Nepal, and Nepal became the first country in Asia to start a cheese industry. It was the only country in the world producing yak cheese before 1980s. Hard Swiss Gruyere type cheese was produced. This cheese is popularly known and marketed by the name of Yak Cheese today.” — Thapa, T.B. Diversification in processing and marketing of yak milk based products. Kathmandu, Nepal: National Dairy Development Board. 2000. Accessed January 2022 at http://agtr.ilri.cgiar.org/sites/all/files/library/docs/yakpro/SessionG2.htm

Cheese production in Nepal remained in the sole hands of a state monopoly — first called the Dairy Development Board and in 1969 renamed the Dairy Development Corporation (DDC) — until the early 1990s, by which time private cheesemaking became permitted. DDC-made yak cheese is still considered safer and better, though: the private sector in Nepal is much hampered by high state fees and bribes, hindering their ability to invest in proper equipment and procedures and tempting them to cut corners. Westerners will not invest because their are no legal protections for their investments.

In an episode of Buffy: The Vampire Slayer (Wrecked: 27 November 2001), Willow tells Buffy that she has “stinky yak cheese” in her bra to help her perform some spells. 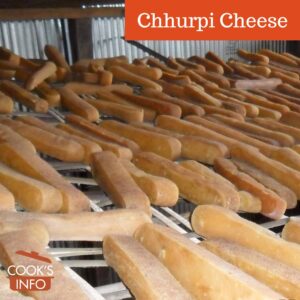 Chhurpi is a cheese made in Tibet, Bhutan and Nepal. It is as hard as a piece of chalk. The cheese can be chewed as a snack while travelling, or ground into a powder for use as a condiment in soups.

Churtsi is a yak cheese made in Bhutan. It can be made from milk from a dri (female yak) or from a chauri (a cross between a cow and a yak.) To make chursti, a yoghurt which called "dhai " is first churned for butter . The remaining buttermilk is...

Rajya Metok is a mild-tasting Tibetan yak cheese. It has more of an animal smell to it than cheese made from cow's milk does, though very little of the smell comes through in the taste.

To make Serkam / Dartsi cheese, dri (female yak) or chauri milk is fermented into a yoghurt called "dhai", then churned and used as butter. The buttermilk left from the butter-making process is then boiled and drained. The result is a fresh cheese, somewhat...

Sewsew cheese is serkam (aka dartsi) cheese that has been allowed to ferment.

This web site generates income from affiliated links and ads at no cost to you to fund continued research · Information on this site is Copyright © 2022· Feel free to cite correctly, but copying whole pages for your website is content theft and will be DCMA'd.
Tagged With: Yak Cheese